Chasing the Dragon: When is it Time to Seek Heroin Detox?

Heroin addiction affects 626,000 Americans, and was linked to 15,500 overdose deaths in 2016. People who use this highly addictive opioid can easily get caught up in trying to achieve the peaceful, euphoric high they initially felt at the beginning — even though they’re putting themselves at risk for a deadly overdose. If you are a heroin user intent on chasing the dragon to experience that first powerful high, it may be time to seek heroin recovery in the form of a professional heroin detox before it’s too late.

Here’s what you need to know about the U.S. heroin epidemic, and how a heroin detox can help you stop chasing the dragon.

Rates of heroin use and overdose deaths in the U.S. are continuing to rise as the country fights its ongoing opioid epidemic. In 2016 roughly 948,000 Americans reported using heroin in the past year, while 170,000 Americans reported using heroin for the first time — which is almost double the number of people who tried heroin for the first time in 2006. The number of heroin-related overdose deaths increased fivefold between 2010 and 2016, and by 19.5% from 2015 to 2016 to cause 15,500 deaths.

Prescription painkiller misuse is cited the strongest risk factor for initiating heroin use, with three out of four heroin users reporting having abused prescription painkillers prior to starting heroin. A recent study reveals that heroin use and overdose rates started increasing significantly during late summer 2010, after the makers of OxyContin released an abuse-deterrent formulation of the drug that made it nearly impossible for people to misuse their prescriptions. As a result, many Americans struggling with oxycodone addiction switched to using heroin, and the rate of heroin overdose deaths increased steadily thereafter.

Today, the U.S. opioid epidemic remains a major public health emergency, and is being addressed by a number of government agencies working to reduce the number of nationwide overdose deaths. The DEA 360 Strategy is aimed at fighting heroin addiction through law enforcement, diversion control, and community outreach, while the U.S. Surgeon General’s Office is encouraging Americans to carry naloxone so they can save friends, family, and community members from deadly opioid overdoses.

Call Detox.com now to find heroin detox centers near you!

What Makes Heroin So Addictive?

Heroin is one of the most addictive drugs in the world due to the way this opioid taps into brain chemicals that produce euphoria and alter one’s physical and emotional state. Compared to other drugs and substances, heroin can lead to addiction over a shorter period of time when used regularly and frequently — even in small doses.

Many who suffer from heroin addiction or who are in heroin recovery are familiar with the concept of “chasing the dragon” — a term that describes the feelings and sensations that commonly lead to heroin addiction. The powerful, euphoric high brought on by heroin use is so pleasurable and exhilarating that people continue using the drug with hopes of achieving that first, peaceful, perfect high they felt in the beginning. Unfortunately, heroin is so potent that users quickly build a tolerance, and get caught up in an endless quest of chasing the dragon until their journey finally stops short with a fatal overdose.

Here’s a closer look at why heroin is highly addictive.

It Causes Changes in Brain Chemistry

Heroin and other opioids work by binding to opioid receptors located throughout the brain and body that induce feelings of relaxation and pain relief. At the same time, this chemical reaction causes the brain to produce higher amounts of dopamine — a brain neurotransmitter responsible for feelings of pleasure, reward, and euphoria. This is why heroin users experience all the effects of painkillers in addition to euphoria.

Over time with repeated heroin use, the brain stops producing dopamine on its own, and relies on heroin for feelings of euphoria and pleasure. Those who struggle with heroin addiction and who stop using the drug abruptly will face a range of withdrawal symptoms as their brains and bodies try to adjust to functioning without the opioid. But many heroin withdrawal symptoms including nausea, vomiting, and muscle aches can cause pain and discomfort, and influence users to seek out more heroin to stop their symptoms.

Since heroin boosts the brain’s dopamine production, those who stop using heroin will experience a range of negative feelings that lie on the opposite side of the spectrum from pleasure and euphoria. Irritability, aggression, anxiety, and depression are just some psychological withdrawal symptoms people will experience when stopping heroin. The inability to feel pleasure — known as anhedonia — is another common heroin withdrawal symptom.

Many heroin users will continue chasing the dragon in an effort to experience lasting euphoria, which is another reason this drug is so addictive. But using heroin regularly causes people to become tolerant to the drug, and prevents them from experiencing their desired high regardless of the amount being used.

Its High Can Easily Be Intensified

Combining heroin with other drugs and substances can lead to a more intense high, though this practice is extremely dangerous. Those who become tolerant to heroin may try mixing the drug with alcohol, cocaine, methamphetamine, benzodiazepines, and other drugs known for producing highly euphoric effects. But some drug combinations interfere with the brain and body in ways that can lead to an overdose death, or lifelong health complications such as coma, brain damage, and organ failure.

The strength, potency, and effects of any given batch of heroin are also unknown and unpredictable, since heroin is an illicit drug only available on the streets, and comes from a number of different sources. Some dealers mix or cut their heroin supplies with cheaper substitutes like synthetic fentanyl to generate higher profits and to offer their customers a stronger high. Heroin users who insist on chasing the dragon to experience greater euphoria can suffer an overdose instantly after using a bad batch of heroin laced with fentanyl or carfentanil. Sometimes, not even the opioid overdose reversal drug naloxone can revive overdose victims who have used heroin laced with these potent synthetic opioids.

When is it Time to Seek Heroin Detox? 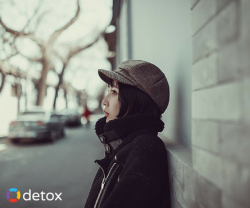 It’s never too early or too late to seek help for heroin addiction!

Here’s how to tell it’s time for you or a loved one to seek heroin detox.

Heroin addiction is a chronic, relapsing brain disease marked by compulsive urges to use heroin regardless of negative consequences that may arise. Those who suffer from addiction will often neglect important responsibilities so they can spend more time getting and using heroin, and recovering from the drug’s effects.

You may need a heroin detox if you’re showing any of the following signs of addiction:

There are no pros to using heroin or suffering from heroin addiction. Heroin addiction can take over your life, and make you do things you normally wouldn’t do just so you can continue using this deadly opioid and keep chasing the dragon. If you feel that your life seems to be falling apart, it may be time to seek a heroin detox.

In addition to causing dependence and addiction, heroin use can cause a range of other serious health problems that compromise your overall livelihood and well-being. Using heroin repeatedly changes your brain structure to create long-term imbalances in hormones and brain chemistry that are not often easily reversed.

Aside from experiencing serious health problems, many heroin users tend to suffer relationship problems, financial problems, and legal problems as a result of neglecting other important responsibilities in favor of heroin use. It’s time for a heroin detox if you struggle with paying rent, mortgage, or credit card bills after having spent lots of money on heroin, or if you’ve been running into problems with law enforcement.

If this sounds like you, getting a heroin detox can help you achieve improved physical and mental health, and offer you the healing and mental clarity you need to recover from addiction and get your life back in order. It’s never too late for a heroin detox, regardless of how much you feel you may have lost on behalf of addiction. A heroin detox gives you the best chance at achieving a healthier, more fulfilling lifestyle, and at repairing relationships that were broken due to addiction.

How Can I Find Help for Heroin Addiction?

Looking for quality heroin addiction treatment can seem like an overwhelming task if you’re coping with symptoms of addiction and need help. Fortunately, finding a heroin recovery center is easier than you may think — especially now that many states are expanding access to opioid addiction treatment on behalf of the opioid crisis.

Here’s how to find a reputable heroin recovery center.

Call our 24/7 confidential helpline at 800-483-2193(Who Answers?) to speak with a caring, understanding, and experienced drug abuse counselor who can point you in the right direction. We’ll perform a free insurance beneﬁt check, and help you find the best treatment through your health insurer. Our addiction counselors will answer all your questions about available heroin detox treatments, and help you find the best drug detox program for you or your loved one.

Use our drug detox center directory to browse and research nearby heroin recovery programs that can help you achieve sobriety. Select your city and state, or choose a state in which you want to recover from heroin addiction. Consider drug detox centers located near loving and supportive friends and family, or in your favorite city and state. If you feel as though friends and family are contributing to your heroin addiction, look for treatment programs away from home and negative influences where you can gain a fresh start following your heroin recovery.

Ask Loved Ones for Help

Loved ones and those in your life who truly care about you will always have your best interests at heart — especially when it comes to your recovery from addiction. Don’t hesitate to ask your loved ones to help you with choosing a heroin recovery center, since these individuals can cheer you on, provide you with a healthy environment, and make your challenges seem less difficult.

Friends and family can help you choose the best heroin recovery program by weighing in with their own thoughts and ideas regarding treatments and programs that may work best for you. For instance, if you’re trying to retain your job and can’t take time off work to recover at an inpatient drug detox center, your family may suggest methadone maintenance therapy at an outpatient detox center, and volunteer to drive you to daily appointments so you can keep going to work.