How to Stop Drinking in 5 Effective Steps

You have probably been telling yourself that you don’t have a drinking problem for years now. After all, over half of all Americans over the age of 12 are current alcohol drinkers. Most everyone you know probably drinks. But 6.4% of these drinkers qualify as having an alcohol use disorder—that’s 17 million people who need to quit alcohol.

Alcohol use leads to 88,000 deaths each year in this country, and untold numbers of damaged relationships and broken dreams.

Don’t let your relationships, your dreams, or your life, be lost to alcoholism. Read the following five steps on how to quit drinking, and face your alcohol dependency head on.

Signs That You Need to Quit Drinking

Maybe you aren’t sure that your drinking qualifies as an addiction. Often, a drinking problem starts off slowly, with a few mild symptoms gradually increasing until problem drinking becomes serious alcoholism.

Consider the following symptoms of alcohol use disorder, and honestly decide if you have seen any of them in yourself over the past year:

Depending on the degree of severity, even having just one or two of these symptoms can indicate your drinking is a problem, and the more symptoms you have, the more urgent it is that you seek treatment for alcohol use disorder.

How to Stop Drinking in Five Effective Steps

Step 1: Look for Signs You Need to Quit

Look through the list above and see how many symptoms you see in yourself. If this gives you cause for concern, it’s time to either quit or cut down on your drinking. But how do you know which is appropriate? One way is to discuss your symptoms with a friend, your doctor, or anyone else you trust and can speak honestly to. Think about whether you have a family history of alcohol problems, whether you’ve been injured or suffered other serious consequences due to drinking, and whether you have tried to cut down in the past and couldn’t do it. Some people are much better off stopping drinking altogether, because cutting down is not possible for them. If you are or may become pregnant, are taking a medication that interacts with alcohol, or have a mental or physical condition that is caused by or worsened by drinking, then you are definitely better off quitting.

Step 2: Admit You Have a Problem

Drinking is prevalent in the United States, and if you are a drinker, you probably surround yourself with other drinkers. This can serve as a sort of camouflage that allows you to pretend that you don’t have a problem with alcohol. Drinking is normal to you, and you probably know at least one person whose struggles with alcohol are much worse than your own. But comparing yourself to others means nothing when it comes to what you, yourself, need to be healthy and happy.

Step 3: Talk to Your Friends and Family 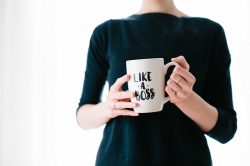 A detox program can help you overcome alcohol dependence for good!

Once you’ve admitted that you have a drinking problem to yourself, it’s time to admit it to others—but let’s be honest, many of them probably know this already, and will be relieved to hear you say it for yourself. But don’t just admit to the problem, announce that you intend to stop drinking. Let anyone you interact with on a regular basis—family, friends, co-workers—know that you’re trying to quit, and ask them to help by not drinking in your presence. Be honest with them and with yourself: you can’t allow alcohol in your home anymore, and you can’t go to places or events where alcohol is served.

Telling people about this important choice that you’ve made makes you accountable for following through. It also prepares people for the changes you’re going to have to make in your life. Some people will fall in line immediately, and will never again ask you to go out for drinks. Others, however, will resist your efforts, and may even seek to undermine your recovery. These are not healthy people to keep around.

If you almost exclusively socialize with heavy drinkers, you may worry that quitting drinking will leave you friendless and alone. But on the contrary, recovery will give you the chance to repair relationships that have been broken by your addiction, and to make new, sober friendships that are based on a genuine, personal connections instead of a mutual fondness for getting drunk. You may have to lose a few friends at the start of your recovery, but as time goes on, you will build a positive, healthy support network of loving people who will keep you motivated and make you feel good about yourself.

To really conquer your alcohol addiction, you need to seek professional help. Never try to stop drinking alone at home. Not only does that make you much more likely to give up and go back to drinking before you’ve really gotten started on your recovery, it can also be incredibly dangerous.

Detoxing from alcohol addiction is a major shock to your brain and body. Alcohol is a depressant that slows down your brain functions. In reaction, your brain will start overproducing stimulating chemicals like norepinephrine and serotonin in attempt to balance your brain chemistry. When you stop drinking, your brain becomes overstimulated, which can lead to a number of dangerous symptoms, such as seizures.

You can overcome alcoholism; get the help you need today!

A severe alcohol withdrawal syndrome called delirium tremens, or the DTs, occurs in some drinkers who have been dependent upon alcohol for a long time, or who are particularly heavy drinkers. It is very hard to predict if you will experience the DTs, and the syndrome can begin as late as seven to ten days after your last drink. It is crucial that you receive immediate medical attention if these symptoms appear, which is why it is best to detox while inpatient at a medical addiction treatment facility.

Symptoms of delirium tremens include:

These symptoms are frightening to be sure, but even the more commonplace symptoms of alcohol withdrawal can be taxing enough to cause relapse without the support of a treatment program. A few of these many symptoms are:

In addition, it sometimes isn’t the symptoms themselves that create a life-threatening situation, but a chain reaction caused by the symptoms. For example, nausea can lead to dehydration, which can cause a host of problems with bodily processes, including kidney function. Alcohol withdrawal can also cause underlying health issues that were previously mild or undetected to become suddenly serious.

After detox, you may choose to remain in inpatient treatment, or transition into a non-medical residential program, or an outpatient day program. No matter what kind of rehab facility you choose, keep in mind, studies have shown that treatment programs of three months or longer have the highest success rates for recovery.

After discharge from treatment, you will need to have a plan in place to make sure that your sobriety is maintained, and that you continue to grow in your recovery. Most rehab programs will help you create an aftercare plan for continued treatment at a less intensive level, but implementing that plan and making the necessary life changes for long term sobriety are up to you.

First of all, it’s crucial to find a safe, stable place to live. If you don’t have one readily available, you may want to try out a sober living facility, where you can pay a modest rent and live with other sober people for six months to a year, receiving onsite counseling and benefiting from a community of like-minded people who are facing the same challenges as yourself.

Other steps that can set you up for long term recovery success are:

In treatment, you will work with counselors and fellow patients in group to identify the people, places, and situations that trigger your urge to drink. Once you have completed a treatment program and are transitioning back into independent living, you will need to plan your activities in ways that avoid as many triggers as possible.

2. When you can’t avoid a trigger, remove yourself from the situation, if possible

Remind yourself of your motivations for getting sober (some people choose to carry a list around in their wallet as a reminder). Call someone you trust, like an AA sponsor. Or distract yourself with a healthy activity such as exercise. Remember too, that you don’t have to “fight” the feeling. Often, it’s better to just accept it, letting it wash over you without giving in, but just observing it and feeling it, knowing that given a little time, the urge will pass. The more you do this, the more confident you will become in your ability to withstand these challenges.

If you believe you’re at risk of alcohol relapse, contact Detox.com now to discuss your treatment options with a caring specialist.

This will not only give you something to turn to when you’re triggered, it will fill up the time you used to spend drinking, and it will give you an outlet for any uncomfortable emotions or restless energy you may have. New activities can also lead to new passions and goals, which can give you even more reasons to stay sober.

4. Practice your “no” in advance

Sooner or later, you will be offered a drink. Come up with some firm but polite ways to say no thanks. Having these responses ready will prevent any hesitation or wavering on your part, and will also allow you to speak convincingly enough that the person asking will be unlikely to push. You can be direct about your problem with alcohol, or if you’d rather keep your recovery private, you can make up an excuse and say that drinking interferes with the effectiveness of an antibiotic you’re taking, or that alcohol gives you migraines.