Save a Life, Learn What Fentanyl Overdose Looks Like Now

A fentanyl overdose can happen to anyone who uses this drug in any form, whether it be a prescription version of the drug or fentanyl purchased from the streets or the Internet. Fentanyl overdoses can even happen to those who use heroin and non-opioid drugs since dealers frequently cut or mix fentanyl with other street drugs due to its low cost.

Take time to learn the signs of a fentanyl overdose, since doing so can help you save your friends, family, and community members from this deadly epidemic sweeping across the U.S.

Here’s everything you need to know about fentanyl and signs of overdose, and what you can do to save the lives of those who need help fighting drug addiction.

The U.S. accounts for about one-fourth of all drug overdose deaths that take place around the world — most of which are caused by opioids like fentanyl. Overdose rates in the U.S. more than tripled between 1999 and 2015, and are projected to rise even higher within the next 10 years. Analysts say opioid overdoses could kill as many as 500,000 Americans between 2015 and 2025 if synthetic opioids like fentanyl and carfentanil continue to spread rapidly across the country.

Why is fentanyl abuse on the rise, and why are overdose rates growing? For one, fentanyl is lower in cost than most other drugs, which is why dealers are mixing and cutting their drug supplies with fentanyl. Second, fentanyl is easy for anyone to obtain, since the drug can be purchased directly from manufacturers in China that send fentanyl in the mail using the U.S. postal service. Fentanyl abuse is a serious behavior that can not only lead to dependence and addiction, but to a deadly drug overdose as well.

Save a Life: Learn the Signs of a Fentanyl Overdose

Fortunately, any drug overdose can be prevented with the right treatment, intervention, and education. Overdoses don’t always happen as quickly as portrayed on TV and in the movies, and can even happen to people over the course of several hours while they sleep.

Here are common signs of a fentanyl overdose. Review these signs so you can step in and intervene to save someone’s life during an overdose.

Opioids like fentanyl slow down respiration and breathing to produce feelings of relaxation and pain relief, but high doses can cause someone to stop breathing altogether. Look, listen, and feel for breathing to determine whether someone may be suffering an overdose.

Opioids depress the central nervous system and can cause muscles to become flaccid and limp as a result. Check for floppy arms and legs, which may indicate a fentanyl overdose.

Slowed breathing can lead to lower oxygen levels in the blood, which causes lips and fingertips to take on a bluish or purplish tint. Examine the color of a person’s lips and fingers to detect an overdose.

Snoring and gurgling sounds are common signs of overdose that indicate a person’s airways may be partially blocked to cause breathing problems.

Reduced oxygen flow to the brain during an overdose can cause disorientation and confusion. Your loved one may be having a fentanyl overdose if they suddenly start acting confused for no reason.

Fentanyl can slow down central nervous system function to the point a person loses consciousness and can’t be roused from sleep. Check the person’s airway, breathing, and pulse to determine whether they’ve become unconscious due to fentanyl overdose.

If you’re unable to wake someone up or elicit any type of response, don’t assume the person is sleeping, since these are signs of an overdose. Contact emergency medical services immediately so the person has a chance of surviving and getting help for their drug use disorder.

What Should You Do if Someone Overdoses on Fentanyl?

If you suspect someone is overdosing on fentanyl, call 911 or emergency medical services right away. Waiting for the person to wake up wastes valuable time that could otherwise be spent on reviving the overdose victim and helping them stay alive.

Here are steps to take when someone is overdosing on fentanyl: 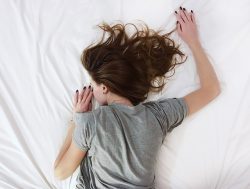 If the person is unresponsive, they’re likely experiencing a fentanyl overdose.

Recovery Position means laying the person on their side, turning their face in the same direction, and bending their bottom knee. This helps keep the airway clear and lowers the risk for aspiration caused by choking on vomit.

Calling emergency medical services is the first thing you should do when a person is overdosing on fentanyl. But some people hesitate to call 911 for fear of facing arrest, charges, and prosecution for possessing illicit drugs and paraphernalia. If you’re afraid of calling 911 for this reason, please understand that 41 states now offer immunity in the form of Good Samaritan laws to help those experiencing or witnessing opioid overdoses.

Calmly inform the 911 dispatcher that someone may be suffering a fentanyl overdose and that their breathing has either slowed or stopped. Be sure to mention the names of all drugs and substances the person was using so first responders can bring the right amount of naloxone to revive the overdose victim. Naloxone is an opioid overdose reversal drug with the ability to revive victims within minutes — however, sometimes several doses of naloxone are needed to revive fentanyl overdose victims due to the drug’s high potency level.

Naloxone is available without a prescription in 41 states — meaning you can purchase the drug early on and have it on hand in the event you need it to revive a person suffering an opioid overdose. Studies show that naloxone can reverse about 93.5% of all opioid overdoses and that the drug is a safe, cost-effective remedy for individuals, their families, and local communities being affected by the opioid crisis. In many states, naloxone can be administered by emergency medical services, law enforcement, friends, family members, and anyone else who has obtained the medication and is present during an overdose.

Naloxone is available as a nasal spray or injection. Before using naloxone, carefully read the directions that came with your medication to learn how to administer the drug safely and effectively. Naloxone has been shown to revive fentanyl overdose victims within five minutes.

What Causes a Fentanyl Overdose to Occur?

A fentanyl overdose can occur for many reasons, such as lowered tolerance, prescription drug misuse, and using substances that are unknowingly laced, mixed, or cut with fentanyl.

Using fentanyl consistently can cause your body to become tolerant to the drug and require higher amounts to feel the drug’s effects. But when you suddenly stop using fentanyl after running out of drugs, seeking treatment or going to jail, your fentanyl tolerance levels will significantly decrease. When people relapse and go back to using fentanyl, many people fail to take their lowered tolerance into consideration and return to using the same amounts — putting themselves at great risk for an overdose.

A fentanyl relapse can be fatal; get treatment help today!

Studies show that drug overdose rates are often higher in drug detox patients since detox treatments clean the body to eliminate any existing tolerance levels. One study shows that 31% of drug detox patients overdose following treatment, with 42% of those overdose victims being problematic opioid users.

Fentanyl overdoses are also common because the drug is unregulated and highly potent, and can range anywhere between 50 and 100 times more powerful than morphine. A person who uses fentanyl never knows what they’re getting, or how strong their batch will be compared to the previous batch. Each batch of fentanyl also contains different combinations of chemicals and substances that cause unpredictable side effects in users.

In recent months, law enforcement officials across the country have reported a higher number of cases of fentanyl being mixed with non-opioid drugs like cocaine, methamphetamine, and MDMA. Many non-opioid users are suffering fentanyl overdoses without even knowing their drugs contain this deadly synthetic substance.

The Dangers of Fentanyl Abuse

While a deadly overdose may be the worst possible outcome of fentanyl abuse, anyone who uses this opioid faces the risk of dependence, addiction, and long-term health problems. Certain side effects of fentanyl such as vomiting, rapid heart rate, and slowed breathing are often just as dangerous and can lead to complications like dehydration, seizures, and heart failure.

Long-term fentanyl abuse can lead to organ damage and organ failure, as well as anoxic brain damage, which is an injury to the brain due to lack of oxygen. Your body and major organs require oxygen to function normally, but fentanyl slows down respiration to deliver less oxygen to your brain and organs. From a psychological standpoint, fentanyl abuse can cause unusual dreams, paranoia, and hallucinations, and interfere greatly with memory, thinking, and concentration.

Save Your Own Life: Get Detox Treatment Today

No matter how long you’ve been using painkillers, heroin, cocaine, or meth, and no matter how high your tolerance may be for these substances, you face the risk for an overdose any time you use these drugs since dealers are mixing them with fentanyl. If you’ve already suffered an overdose in the past, avoid a future overdose by getting help in the form of professional drug detox treatment for fentanyl.

A person who dies from an overdose will not have another chance to get clean and recover from drug addiction. Don’t let this happen to you, or someone you care about. Instead, take the necessary precautions when using drugs by staying informed about your options.

Even if you’re not quite ready to go through detox and become sober, there are still steps you can take to lower your risk for a fentanyl overdose, in addition to learning the signs of an overdose and knowing what to do when an overdose occurs.

Harm reduction workers in some U.S. cities are now distributing fentanyl test strips to local heroin users so they can screen their drugs for fentanyl and avoid an overdose. A recent study conducted on the concept of “drug checking” found that 85% of heroin users are interested in knowing whether their drugs contain fentanyl — with 70% reporting they would modify their drug-using behavior if fentanyl were detected. Fentanyl testing strips are available at needle exchange sites and harm reduction centers, and can be purchased for as low as $1 in some cities.

Detox treatments for fentanyl usually involve the use of FDA-approved medications that relieve and eliminate opioid withdrawal symptoms like bone pain, insomnia, and vomiting. Look for detox centers that offer a medical detox or medication-assisted treatment for opioid addiction, since these detox methods use buprenorphine, methadone, and naltrexone to manage your symptoms. Sometimes naloxone is even used to block the effects of opioids and lower the risk of relapse and an overdose.

Drug detox centers are available in nearly every city and state to help you or your loved one overcome opioid addiction, and avoid the risk of a deadly overdose. Use our rehab directory to locate the nearest drug detox centers near you, or call our 24/7 confidential helpline at 800-483-2193(Who Answers?) to speak with an addiction counselor about your treatment options.