Butalbital is a barbiturate drug that is usually found in combination medications used to treat severe headaches. It is also used illegally—either as part of these medications or alone—to create euphoria and other intense effects. Those who misuse butalbital can become dependent on it quickly, as can those who take it exactly as prescribed. Like other CNS depressants, butalbital is dangerous and can cause intense dependence in those who take it regularly for at least several weeks. People who become dependent on this drug can experience withdrawal if they suddenly stop taking it, which can lead to life-threatening symptoms such as psychosis and seizures. Treatment for dependence should take place in a professional butalbital detox center.

Butalbital is sold in a combination with the medication Fiorinal, which also contains acetaminophen and caffeine. This drug is used to treat tension headaches (National Library of Medicine). Butalbital can also be found on the black market by those hoping to abuse the drug because of its side effects.

However, anyone who takes butalbital for more than a few weeks regularly will likely become dependent on it.

Dependence associated with butalbital abuse is serious. Most people do not realize this drug can cause dependence, let alone a severe withdrawal syndrome. This leads many people to abuse it without thinking of the consequences.

On the other hand, those who take butalbital exactly as prescribed can become dependent as well. It is important to be aware of the signs of dependence, which include

Those who become dependent on butalbital will experience withdrawal if they suddenly stop using it. The National Institute on Drug Abuse suggests discussing with your doctor the potential of experiencing butalbital withdrawal before you begin treatment with the drug, but most people do not. Also, many people do not realize how dangerous withdrawal from this drug can become, especially if they have received it as a treatment medication for tension headaches.

Signs and Symptoms of Butalbital Withdrawal

The common symptoms of butalbital withdrawal include

If the individual was not addicted to the substance, they will not experience drug cravings. Because the drug is often marketed with acetaminophen and caffeine, one might also experience caffeine withdrawal in addition to butalbital withdrawal, the former of which can include many of the symptoms listed above in addition to brain fog, constipation, and muscle pain.

You may also potentially experience the severe withdrawal symptoms sometimes associated with butalbital, which are extremely difficult to predict. These can include

If these symptoms do occur, the individual will need immediate medical treatment, so if you notice any of these in yourself or someone else, call 911 now. 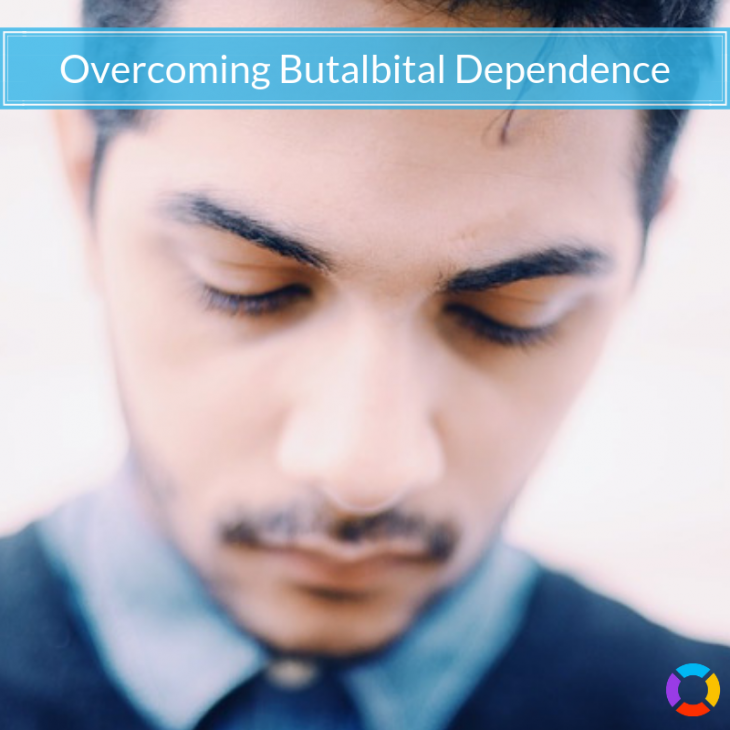 Butibital withdrawal usually takes place over the course of 3 to 4 weeks. Most individuals will be able to get through the main symptoms by this point and start to feel stabilized again. However, it is important that you stay in treatment for the duration of your withdrawal syndrome, and you must also remember that the early symptoms are usually the most intense.

PAWS is not considered to be part of the withdrawal timeline, but it does occur for many individuals. This is why it is so important to be aware of the issue and to learn to cope with it both in detox and rehab treatment.

Butalbital is a type of barbiturate drug. These substances cause a withdrawal syndrome that is similar to alcohol’s delirium tremens, which is one of the most dangerous syndromes possible. Some people do not experience psychosis or seizures, but both of these issues are extremely dangerous and could occur without warning throughout the first 15 days or so of withdrawal. It is extremely important to be knowledgeable and prepared for these symptoms before they occur.

Depression can also cause serious issues during this withdrawal syndrome. Some individuals even experience suicidal thoughts and may act on them if they are not treated properly.

In addition, relapse is a serious potential danger of butalbital withdrawal. Those who do not seek the proper treatment could easily relapse back to using the drug, which could lead to respiratory depression and death. Most people going through detox don’t realize their tolerances diminish at this time, leading them to a serious risk of overdose if they do relapse.

Am I Dependent on Butalbital?

If you are wondering if you may be dependent on butalbital, it is likely you already are. However, it is important to ask yourself if your concerns are serious by answering a few questions.

If you answered yes to any of these questions, you are already dependent on butalbital. In addition, if you have been abusing the drug, it is likely you are addicted as well or could become addicted very soon.

Should I Go through Butalbital Withdrawal at Home?

Butalbital withdrawal should always take place in a detox center, preferably an inpatient facility that can offer you safe, effective care 24 hours a day. Those who attempt to go through this process without the proper treatment put themselves at risk of the dangers listed above as well as other serious side effects. Relapse often occurs, and many people will turn to the use of even more dangerous drugs that cause similar effects (Drug Enforcement Administration).

Some people are afraid they won’t be able to afford butalbital detox, but there are low-cost and even free detox centers that can help you put an end to your dependence on this drug and start your life over again. Detox is often the first step in recovery, and it is extremely necessary for those about to go through such an intense withdrawal syndrome like butalbital.

Detox for butalbital usually starts with a few routine tests and questions meant to help your doctor determine which treatments will best suit your needs. Then you will begin the process of detox, which allows you to be weaned off the drug with the help of other, doctor-prescribed medications.

Because of the unpredictable nature of butalbital detox and withdrawal, most patients are encouraged to seek inpatient care. This way, if their symptoms suddenly worsen, they will have 24-hour medical surveillance and a staff of trained doctors and nurses who will be able to protect them from any life-threatening symptoms.

Rehab should always follow detox if you were abusing butalbital. Addiction cannot be treated with detox, and so, you will need to find a professional treatment center that will offer behavioral therapies and other programs necessary for addiction treatment. Once you are no longer experiencing withdrawal symptoms, it will be easier for you to focus on your treatment and build a solid foundation for recovery. As stated by the NIDA, you may decide to attend more treatment programs over the course of your recovery.