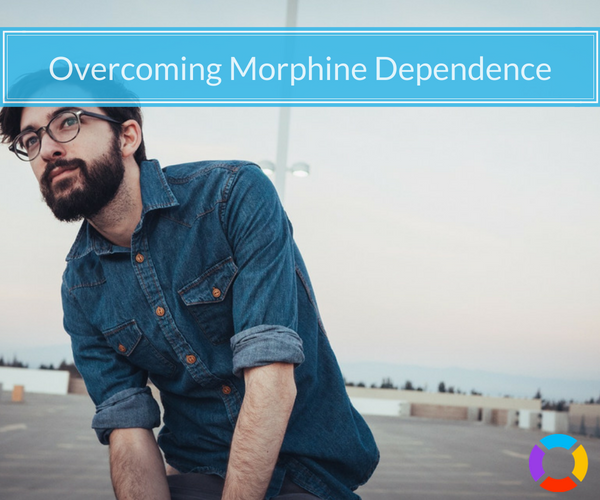 Morphine, one of the strongest opiate drugs in existence, provides effective relief for conditions involving moderate to severe pain. Morphine also carries a high potential for abuse and addiction. While most everyone has heard the phrase “addiction is a disease,” many people may not realize the far-reaching effects of addiction work in much the same way as diabetes and heart disease. Morphine detox becomes the first stage in treating the disease of addiction.

When used on a repeated basis for one to two weeks time, users start to experience how morphine has altered and damaged normal body functions. Discontinuing or reducing dosage amounts will send a person into withdrawal.

Even after a person successfully completes morphine detox, he or she will still have ongoing treatment needs. In the absence of ongoing treatment, the disease state of addiction will likely return.

Call 800-483-2193(Who Answers?) to speak with a treatment specialist about your morphine detox options.

Morphine medications come in different strengths, which work to treat a wide range of conditions. Morphine comes in both generic and brand name varieties, some of which include:

Though an effective pain reliever, unintended side effects from morphine induce feelings of euphoria and well-being, according to the National Institute on Drug Abuse. These side effects become one of the driving forces behind addiction.

With ongoing use, morphine alters brain cell receptor function causing widespread chemical imbalances within the central nervous system. Over time, the brain comes to depend on morphine’s effects to regulate body functions. These cell receptors undergo considerable damage in the process. Recovering addicts start to get a feel for these damaging effects during the morphine detox process.

While uncontrollable drug use in the face of negative consequences is the primary indicator of addiction, addicts also experience other signs of morphine addiction, some of which include:

Once addiction sets in, morphine detox is the only way to break the body’s dependency on the drug. Morphine detox should be a medically monitored process as withdrawal symptoms can be severe and place a person’s safety at risk.

If left untreated, a cycle of addiction will continue to effect damage on brain and body functions. Ultimately, the longer a person delays morphine detox, the more severe his or her withdrawal symptoms will be. According to the Substance Abuse & Mental Health Services Administration, when morphine is no longer attainable addicts often resort to more dangerous street drugs such as heroin.

Learn about your morphine addiction treatment options by calling Detox.com.

As the body adjusts to the absence of morphine in the system, brain neuro-chemical processes attempt to re-establish a normal chemical balance. Brain neurotransmitter chemicals, such as dopamine, serotonin and norepinephrine regulate essential body functions like breathing, emotions, digestion and cognitive abilities.

While this may seem less than encouraging, the alternative to morphine detox is an ongoing deterioration of brain and body functions. Chronic medical conditions, chronic psychiatric conditions and even death are the inevitable result. 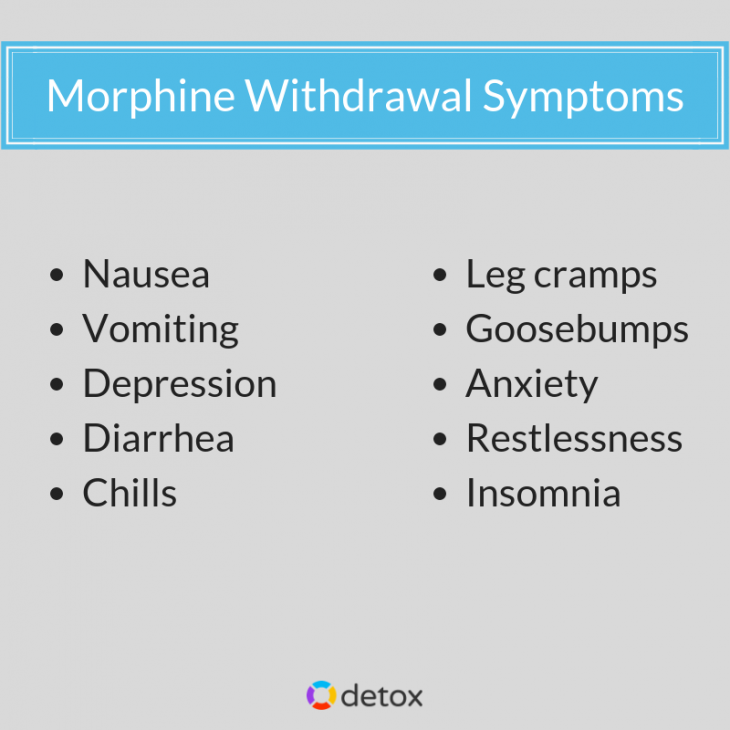 Morphine detox happens in stages where the severity of withdrawal effects can vary as a person progresses through the detox period. On average, a morphine detox period takes anywhere from two weeks to two months depending on the severity of the addiction. Within this time, a person will go through three stages of withdrawal with the potential for different detox symptoms at each.

Stage One is where the most acute or severe symptoms will occur. Symptoms begin around 12 hours after a person’s last drug dose. Stage One symptoms typically take the form of:

Symptoms usually peak around day three and last for up to five days total.

Stage Two marks the start of the brain’s work towards rebalancing its chemical levels. The symptoms most likely to develop include:

Stage Two symptoms can last for up to two weeks.

Compared to the other two stages, Stage Three lasts the longest, running anywhere from one week to two months in duration. Symptoms occurring during this stage are less severe than the previous stages. Stage Three symptoms may take form of:

Each of these medications is made from synthetic opiate materials. According to the Office of National Drug Control Policy, synthetic opiates produce the same effects as morphine without the high potential for addiction. These effects can greatly reduce the severity of withdrawal effects and also lessen the degree of drug cravings a person experiences. As each medication produces different effects in terms of eliminating cravings and/or reducing withdrawal effects, the severity of a person’s addiction determines which treatment will work best.

Anyone who’s serious about breaking a morphine addiction must at some point go through the morphine detox process. While detox is a mandatory first step, maintaining abstinence for the long-term requires ongoing treatment. Eliminating the body’s dependency on the drug is only the beginning.

Treating the psychological aspect of addiction provides a person with the needed tools to manage daily life without the need for drugs. This type of treatment entails psychotherapy and ongoing support group work. Neglecting this aspect of the recovery process leaves a person at risk of relapse and resuming drug use once again.

We can help you begin the recovery journey. Call 800-483-2193(Who Answers?) now to find the best morphine detox program for your needs.