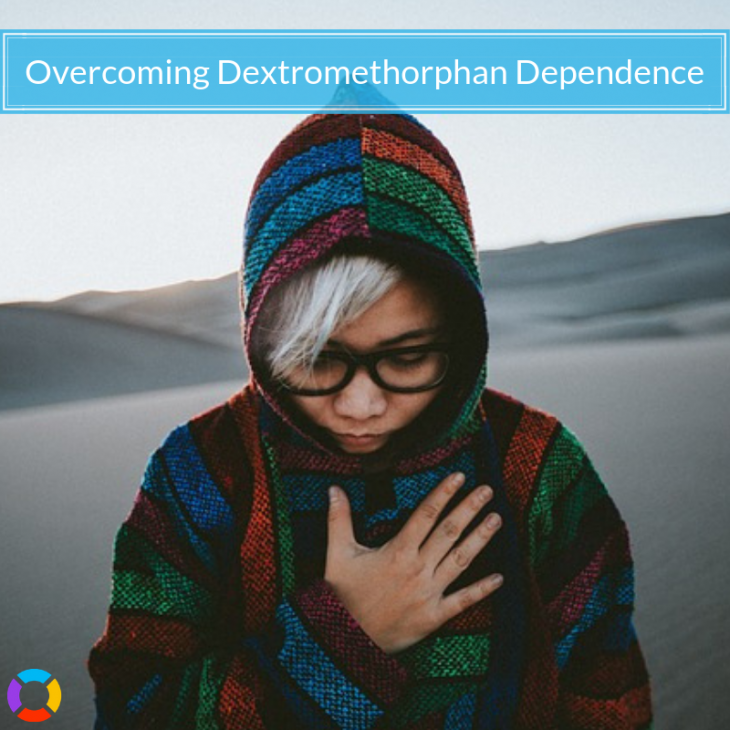 Dextromethorphan is a substance found in certain over-the-counter cough syrups that is often used by teenagers and young adults as a way to get high or intensify the effects of alcohol. Unfortunately, many young people abuse this drug without an understanding of the serious side effects their abuse can cause, especially addiction and dependence. Even those who take dextromethorphan as they are supposed to can become dependent if they use it regularly for a long period of time. This behavior—or abuse—can lead to withdrawal symptoms if the dependent individual suddenly stops using the drug. Though dextromethorphan detox isn’t considered to be life-threatening it can still cause problems and be extremely uncomfortable.

If you or someone you love has become dependent on and addicted to this dangerous drug, call 800-483-2193(Who Answers?) now. We can help you find safe, affordable detox centers where you can begin your medically assisted withdrawal and safely put an end to your drug abuse.

According to the National Library of Medicine, dextromethorphan is meant to be taken every 4 to 6 hours as needed by those who require help with a persistent cough. While the drug is effective for this purpose, many individuals also abuse it.

Dextromethorphan is often used by those who believe it has no problematic effects, but this is untrue. In fact, the drug’s misuse is extremely dangerous and can cause a deadly overdose. Those who abuse it can also become addicted, tolerant, and dependent.

Most people who take dextromethorphan as recommended do not become dependent on it because it is only meant to be used sparingly. However, those who abuse it can easily become dependent, especially if they are taking it often and in large doses.

Dependence is defined by a need to use the drug in order to feel normal, and dextromethorphan can cause this type of issue if abused often enough and in large doses. Unfortunately, many people who misuse this drug do so in doses between 500 and 1500 mg because they are hoping to achieve dissociative sedation (Drug Enforcement Administration).

Withdrawal from dextromethorphan occurs if someone who is dependent on the drug suddenly stops using it. This can happen if the individual no longer has access to the drug or if they stop taking it purposefully because they don’t realize they are already dependent on it. Withdrawal is not usually life-threatening, but it can be uncomfortable, even painful. In some cases, complicated dextromethorphan withdrawal can be dangerous.

Signs and Symptoms of Dextromethorphan Withdrawal

Dextromethorphan withdrawal feels somewhat similar to opioid withdrawal, which is like the flu. As stated by the National Institute on Drug Abuse, the symptoms of this withdrawal syndrome have not been well studied, but in many cases, people experiencing the syndrome complain of the same effects as those going through opioid withdrawal. These can include

Many of these symptoms also occur when people experience opioid withdrawal, which is why the syndrome is a bit confusing to those who are attempting to study it. However, they are mostly physical, so it can be easy to recognize the syndrome itself in a loved one or a friend. With the exception of toxic psychosis (which is a rare occurrence), uncomplicated withdrawal symptoms associated with this medication are usually mild.

Dextromethorphan withdrawal has not been extensively studied, so it is difficult to pinpoint an exact timeline as well as the moments when withdrawal symptoms begin to change. In most cases, withdrawal lasts about three weeks.

Dextromethorphan doesn’t usually cause a physically or psychologically dangerous withdrawal syndrome. This is partially because it is an over-the-counter drug. However, those who abuse it and become dependent can still experience serious effects that can, in fact, become dangerous if left to worsen.

Relapse is always a potential danger of withdrawal because many people don’t realize how hard it will be. This can cause them to return to dextromethorphan abuse, but their tolerances will be diminished, which can lead to overdose.

Dextromethorphan overdose can be deadly, according to the National Highway Traffic Safety Administration. Its symptoms can include

The gastrointestinal effects of dextromethorphan withdrawal, much like in the case of opioid withdrawal, can potentially lead to dehydration.

People who go through this syndrome might not realize that they are losing bodily fluids to vomiting, diarrhea, and sweating. If the individual does not replenish these by drinking plenty of water, they will become sick and need emergency medical attention.

Depression can also occur during withdrawal, and many individuals who were on large doses of the drug experience severe effects such as suicidal thoughts.

It is always important to screen every individual going through withdrawal for any potential signs of depression. This way, the person can be treated appropriately so the symptoms do not worsen suddenly.

Though it is rare, some individuals experience toxic psychosis as a sudden and dangerous symptom of dextromethorphan withdrawal.

Hallucinations, delirium, and aggressive and violent behavior can all occur. Individuals going through this syndrome will not experience these symptoms for long, but they can hurt themselves or someone else if they are not treated properly for it.

For the most part, dextromethorphan is an uncomplicated form of drug withdrawal, but those who have been using extremely large doses are at heightened risk of the symptoms listed above. In addition, it is difficult to be sure one will not experience any complications during withdrawal, so it is important to always be safe and to seek professional treatment.

Call Detox.com now to find dextromethorphan detox centers near you!

Am I Dependent on Dextromethorphan?

If you have been abusing dextromethorphan regularly and in large doses, you could be dependent. Though this doesn’t usually occur when individuals are taking doctor-recommended doses, abusers don’t always realize when they have become dependent. If you think you need the drug in order to feel normal or you think you are dependent, you probably already are.

Should I Go through Dextromethorphan Withdrawal at Home?

It is always safer to undergo withdrawal with the help of trained medical professionals. This way, if you do experience complications associated with dextromethorphan withdrawal, you will be able to do so safely and receive any necessary treatments. In addition, you can avoid relapse, which often occurs in those who try to go through detox on their own. In every instance, withdrawal in a detox center is safer than at-home withdrawal.

This is not to say that you would be unable to choose outpatient care if you will benefit from it. In general, as long as you are receiving professional care at the level most suited to your needs, you will be able to recover from withdrawal effectively and safely.

Dextromethorphan detox has not been widely studied, as stated previously, so your symptoms will likely be treated as they occur.

You can seek out low-cost, free, spiritual, holistic, and many other kinds of detox programs depending on your needs. Every patient is different and requires their own options for treatment that will suit them best.

After detox, you will need to attend rehab for your dextromethorphan abuse. Detox itself only treats dependence, so you will require further care in an addiction treatment center (NIDA). Here, you will learn to cope with cravings, recognize and avoid triggers, and deal with the other aspects of addiction recovery. Afterward, you may choose to attend another treatment program or perhaps an aftercare option such as a 12-step group.

Detox is not the end of recovery, but it can be the end of your dependence on dangerous drugs like dextromethorphan. It can also be the beginning of your journey to put your substance abuse and addiction in the past and focus on a better future.

Dextromethorphan, like many other drugs that cause dependence, can become very dangerous for those who abuse it. Let us help you put a stop to your substance abuse and begin a safe and effective recovery today. Call 800-483-2193(Who Answers?) now to receive answers to your questions about dependence and withdrawal, begin searching for a detox center that will suit your needs, and safely navigate the intake process.