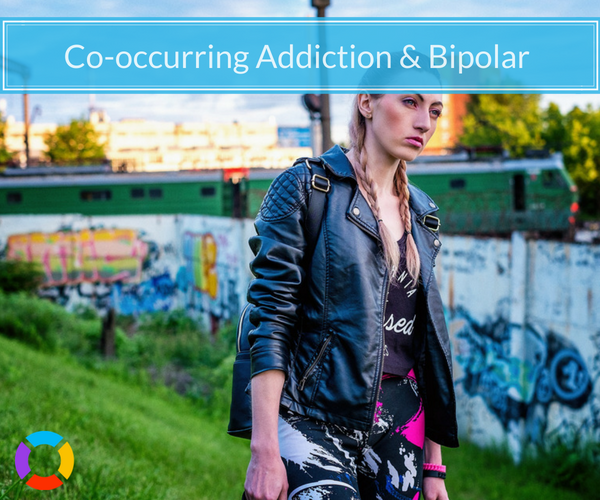 Bipolar disorder and addiction can be a dangerous combination when left untreated, with both conditions creating increasing emotional turmoil over time. As far as mood disorders go, bipolar disorder or BPD is a chronic mental disorder that disrupts your emotional stability and energy levels. When combined with the effects of drugs or alcohol, managing the affairs of day-to-day life becomes increasingly difficult.

Like most mood disorders and addiction, the two conditions form a vicious cycle that drives continued substance abuse while intensifying BPD symptoms along the way. Ultimately, your quality of life will continue to decline as bipolar disorder and addiction wear away at the brain and body’s systems.

Statistics on Bipolar Disorder and Addiction

Causes of Bipolar Disorder and Addiction

Causes of bipolar disorder and addiction can vary from person-to-person, though a strong genetic component does contribute to the development of BPD. Family-wise, you’re 10 times more likely to develop bipolar disorder if you have a parent who has it. Biological abnormalities in the brain may also predispose you to developing bipolar disorder.

Interestingly enough, a drug or alcohol abuse problem can increase the likelihood of developing this condition. Since prolonged substance abuse actually changes how the brain works, the risk of getting BPD is higher among substance abusers. This is especially true for individuals who already have a genetic or biological predisposition.

Forms of Bipolar Disorder and Addiction to Watch For

While there are any number and severities of addiction, there are only four basic types of bipolar disorder. Bipolar category types vary based on the range of moods experienced and energy levels involved.

According to the National Institute of Mental Health, bipolar types include the following:

When abusing drugs or alcohol, bipolar symptoms become more severe or may even shift from type to type.

It’s not uncommon for BPD sufferers to try to self-medicate bipolar disorder symptoms with drugs and alcohol. The temporary relief these substances provide is just enough to keep you coming back for more.

The catch is addictive substances disrupt the brain’s chemical processes, which in turn makes BPD symptoms worse, according to the Journal of Addiction Science & Clinical Practice. In fact, these same damaging effects can actually cause BPD to develop for someone who didn’t have it before.

Long-term effects of bipolar disorder and addiction develop out of the ongoing damage these conditions cause to the mind and body. As a general rule, any disruption in the brain’s chemical system weakens the brain’s ability to manage the body’s systems. Both BPD and addiction breed chemical imbalances in the brain, so ongoing damage will prevail in the absence of needed treatment help.

Over time, long-term effects of bipolar disorder and addiction may include one or more of the following:

Call Detox.com at 800-483-2193(Who Answers?) if you need help finding rehab programs that treat bipolar disorder and addiction.

Treating co-occurring bipolar and addiction disorders requires an integrated treatment approach. An integrated approach works to manage symptoms of both conditions at the same time, which greatly increases your chances of success in recovery.

Stopping substance abuse at the outset is an essential first step when dealing with BPD and addiction. Detox treatment programs offer a range of medical and behavioral treatment interventions, each of which works to help you break the body’s dependence on drugs and alcohol.

Detox programs also provide 24-hour care and supervision, which can go a long way towards helping you make it through this first stage of recovery.

Inpatient programs operate within a hospital-based setting or a residential-type living facility. Hospital-based inpatient programs treat serious medical conditions as well as conditions like BPD, anxiety disorders and severe depression. Residential-based programs focus on behavior-based interventions that help you develop the types of daily living habits and behaviors needed to maintain abstinence on a long-term basis.

Outpatient treatment programs allow you to live at home and attend treatment sessions around your daily schedule. These programs are designed to help you address the day-to-day challenges and problems that come up in recovery. Since you get to live at home, outpatient programs should only be considered after you’ve made considerable headway in the recovery process.

A number of medication therapies can be used to treat bipolar disorder and addiction. The severity of your addiction and the type of bipolar you have will likely determine which medications will work best.

According to the U. S. Food & Drug Administration, medications commonly used to treat bipolar disorder include:

According to the National Collaborating Centre for Mental Health, the debilitating effects of living with bipolar disorder are comparable to those brought on by chronic medical conditions like diabetes and multiple sclerosis. Not only does BPD diminish your emotional well-being, but it can also leave you unable to hold down a job, maintain a household or have genuine relationships in your life.

The presence of addiction makes this development even more likely. Once bipolar disorder and addiction start to disrupt major areas of your life, it’s time to consider getting treatment help.