Meth is used by 1.2 million Americans, and 24.7 million people worldwide. Meth use rates in the U.S. are on the rise again for the first time since the mid-2000s and are causing an uptick in nationwide overdose deaths. The rate of meth-related overdose deaths increased by over 68% from 2015 to 2016, indicating that meth abuse and addiction is quickly on its way to becoming a serious epidemic.

Meth is highly addictive, and can quickly lead to physical dependence when used consistently. Long-term meth use can cause a wide range of health problems including psychosis, stroke, and organ failure, and can interfere with your ability to lead a healthy, fulfilling, and successful life. If you’re struggling with meth addiction, getting help today is the best thing you can possibly do to get your life back on track and reverse the damages caused by meth use.

Meth detox is the first stage of meth addiction treatment and helps you overcome physical dependence on meth. A meth detox allows you to safely withdraw from meth while facing a lowered risk for adverse complications and side effects and often involves the use of medications that help make your recovery more comfortable.

Here’s what to expect from a meth detox, and what you can do to experience the safest, most comfortable recovery possible from meth addiction. 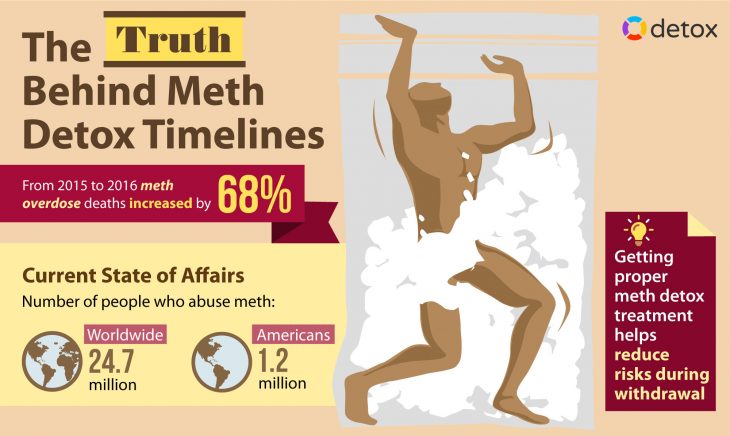 For the last several decades, meth use rates in the U.S. were consistently high year after year until the Combat Methamphetamine Epidemic Act was passed in 2005. The CMEA restricted sales of over-the-counter ingredients commonly used to make meth including ephedrine, pseudoephedrine, and phenylpropanolamine — making it difficult for domestic meth labs to continue operating. After 2005, meth use in the U.S. continued decreasing gradually from year to year. In 2006 there were 731,000 Americans who reported the past-month use of meth; by 2012 this number had fallen to 440,000 past-month users.

Since Americans could no longer easily make meth in homes and meth labs after the passing of the CMEA, drug cartels in Mexico increased production of meth to meet U.S. demand, and are now the leading suppliers of meth in the U.S. The new batches of meth coming from Mexico are found to be higher in purity, and far lower in cost than most other illicit street drugs including heroin and cocaine.

In addition to causing problems with dependence and addiction, long-term meth use can lead to a number of psychological problems including violent behavior, paranoia, and hallucinations. Other common effects of long-term meth use include tooth loss, brain damage, and weight loss. Sometimes these symptoms can last for years after stopping meth use, but getting help for meth addiction right away can give you a head start on reversing and improving many of these fatal health conditions. 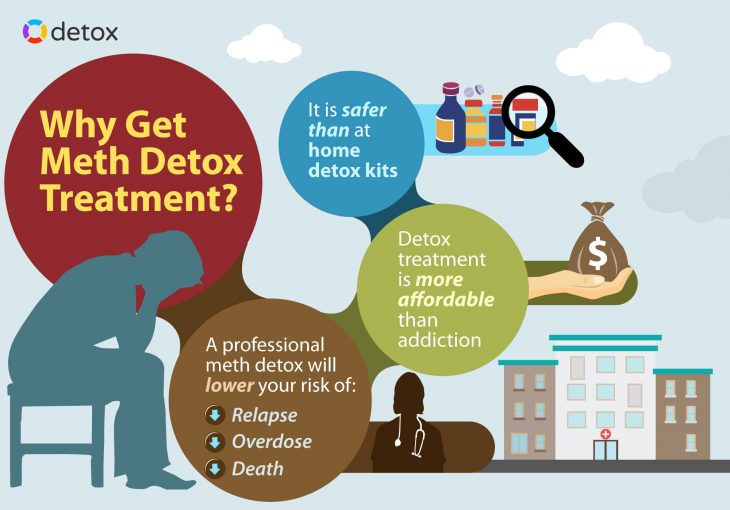 Withdrawing from meth can sound like a scary, risky, painful, and difficult experience to endure. In truth, meth detox is a highly manageable treatment, and can actually make your withdrawal from meth more comfortable and less painful. A meth detox helps lower your risk for relapse, overdose, and death, and offers countless benefits that far exceed any of those associated with continued meth use, and staying caught up in the cycle of addiction.

Factors that determine the length of meth detox include:

Here’s the timeline for a meth detox, along with common symptoms for each phase of meth withdrawal. 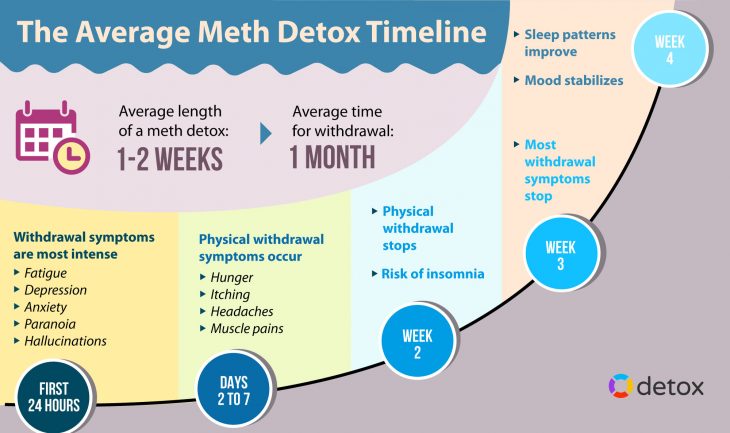 Since meth is a stimulant that speeds up your metabolism, you may gain weight during this time period as your metabolism slows down and regulates. However, this is your body’s way of recovering from meth dependency and doesn’t necessarily indicate a problem. Work with your doctor on developing a healthy detox diet that includes plenty of fruits, vegetables, beans, and other whole foods.

During week two of meth detox, most of your physical symptoms will strongly dissipate, though psychological symptoms will continue to persist. Insomnia may set in, while symptoms of depression, mood swings, and cravings for meth may continue for several weeks or months. After the worst of your symptoms have dissipated, you may be prescribed antidepressants and anti-anxiety medications to manage co-occurring mental health disorders interfering with your recovery.

Contact Detox.com now to find meth detox centers near you!

By week three of meth detox, most withdrawal symptoms will have cleared and you should start feeling more energetic. Lasting symptoms of fatigue, anxiety, and depression are common, though you may be already be improving these symptoms with psychotherapy, medications, and a combination of good nutrition and exercise. Many meth patients stop experiencing withdrawal symptoms by the end of week two, though some may continue to experience symptoms for a few extra days into week three.

Feelings of nervousness and jitteriness can occur around week four, which is normal and common as your central nervous system tries to heal and repair itself after being exposed to chronic meth use. But despite feeling nervous, your sleep patterns will noticeably improve and your mood will become more stabilized. Your appetite will also increase, which is your body’s way of seeking nourishment after having been dependent on meth. Continue working with your doctor on maintaining good nutrition so you can strengthen your immune system, and improve your mental clarity after overcoming meth dependence.

Post-acute withdrawal syndrome, or PAWS, is a set of persistent withdrawal symptoms that can last months or years after overcoming an alcohol or drug use disorder. Most PAWS symptoms are psychological in nature, though fatigue and sleep disturbances are also common with PAWS.

The most common symptoms of PAWS among those recovering from their meth use disorder are depression, anxiety, mood swings, and drug cravings. Recovering meth users with PAWS can benefit from ongoing therapy and aftercare that teaches them how to manage and treat their symptoms during these months.

Today’s meth detox treatments are safe, effective, and overseen by medical professionals who have experience with treating addiction. The largest risks associated with overcoming meth addiction are depression, suicidal ideation, relapse, overdose, and dangerous behavior due to psychosis. But those who detox from meth at professional inpatient medical facilities are often at low risk for experiencing these complications since medical staff and therapists can intervene at any time and offer patients the help and support needed to stay sober.

People who relapse on meth after overcoming dependence are usually at high risk for an overdose since their bodies are no longer tolerant of meth. A person who uses the same doses of meth they used prior to getting a meth detox can overdose instantly, and go on to experience organ failure, coma, or death. But many meth detox centers offer relapse prevention training that teaches patients how to avoid and manage triggers so they can stay sober long-term following detox.

Meth detox treatments are commonly performed as medical detox treatments, which involve the use of medications that can minimize or relieve certain symptoms. A medical detox is often conducted in a hospital or inpatient setting where patients have 24/7 access to nurses, doctors, and therapists. Antidepressants and anti-craving medications may be prescribed to patients as part of meth detox, along with medications like naltrexone have shown effective at reducing meth use.

The fastest way to detox meth is to undergo professional detox treatment at a meth detox center. Professional treatment is safe, thorough, and treats meth addiction as a whole both physically and psychologically so you face better odds of staying sober after treatment. Attempting to detox from meth on your own or with at-home detox kits can prolong your recovery since you face a higher risk for health complications, relapse, and overdose.

Aftercare, also known as extended care, is a set of ongoing therapies aimed at helping you stay sober for life after completing meth detox. Aftercare lowers your risk of relapse and teaches you skills that help you thrive and bounce back after overcoming meth addiction. Addiction experts recommend that addiction recovery programs last a minimum of 90 days, or as long as needed until patients feel confident and ready to re-enter society as sober individuals.

Patients who choose to participate in aftercare often have the freedom to select therapies they feel will work best at helping them stay on track with sobriety. Group therapy, recreational therapy, and 12-step support groups like Narcotics Anonymous are common therapies offered as part of aftercare. Patients can also move to sober living facilities that help them transition back into society as they secure employment and develop new daily routines packed with healthy activities.

Aftercare is an essential part of addiction recovery for former meth users since meth withdrawal symptoms can last for up to several months after detox. Continued therapy provides meth patients with the guidance, support, and encouragement they need to stay sober while facing ongoing symptoms such as depression, anxiety, and agitation. When choosing a meth detox center, ask whether the facility provides aftercare and extended care programs, or about programs you can join after going through detox.

If you’re unable to pay for meth detox on behalf of low income or financial hardship, find out whether you can receive a free drug detox from your health insurer, or qualify for other benefits. All health insurance plans purchased at HealthCare.gov cover the cost of meth detox, as well as plans with Medicare and Medicaid. Free detox treatment may also be available on behalf of federal and state funding if you live in a state that suffers high rates of drug addiction and overdose deaths.

Sliding scale fees, grants, and scholarships are other ways to get free or low-cost detox treatment if you don’t have health insurance or need additional help paying for treatment. Most drug detox centers are open to evaluating your finances and setting up payment arrangements that can help you or your loved one get treatment.

Find help for meth addiction by speaking with your doctor, local hospital, or someone at Narcotics Anonymous who can connect you with professional meth detox treatment. If you know people who have successfully overcome meth addiction, ask these individuals for referrals to programs that can also help you.

Use our detox center directory to explore local treatment options by city and state, or call our 24/7 confidential helpline at 800-483-2193(Who Answers?) to speak with a drug abuse counselor who can discuss all your options. We’ll provide you with all the resources you need to find the fastest way to detox meth, and become healthier, happier, and addiction-free.