For some Americans, work is about collaborating with colleagues, climbing the ladder, and busting glass ceilings. But for others, workday highlights may include getting high, shooting up, or snorting a line.

To get an inside perspective on drug use in the workplace, we surveyed 1,000 Americans on the subject. Who’s using drugs on the job? What kinds of careers do they have? Which drugs do they take and when? And how the heck are they beating those employee-mandated drug tests? Read on for an insider’s view of using drugs in the workplace.

Most People Have Used Drugs at Work 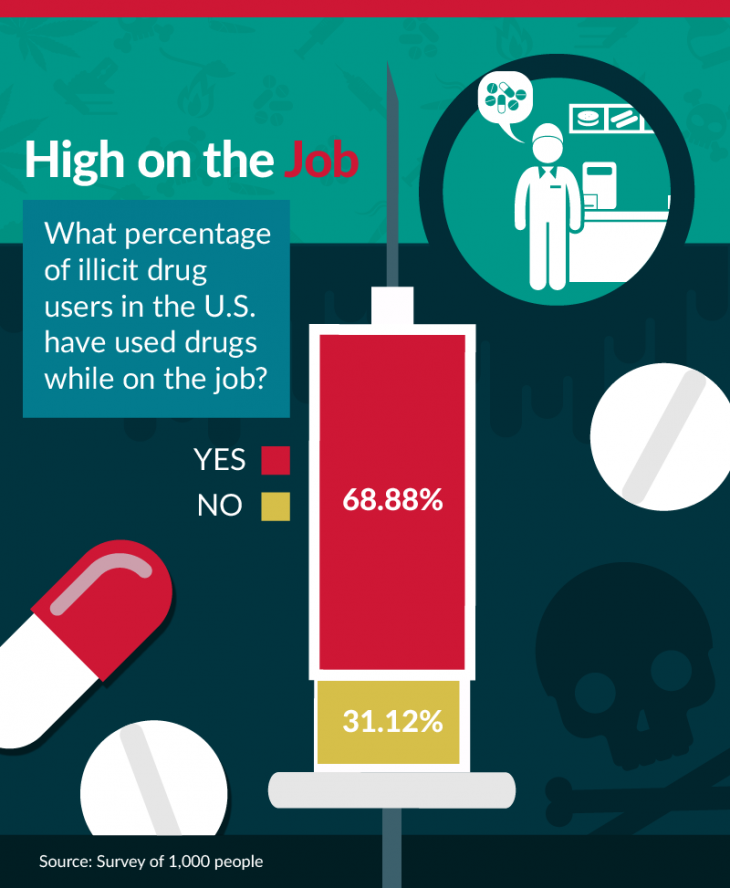 According to our survey, nearly 7 in 10 Americans have used drugs while they were at work—a surprisingly high proportion. According to experts, this type of substance use on the job can take a major toll on workplace health, safety, and productivity due to factors such as injuries and accidents, an increase in illness, absenteeism, and low morale.

Some believe the rise in drugs among workers simply reflects the country’s growing acceptance of drugs. For instance, more and more Americans support the legalization of marijuana and reject jail time for those found to possess the drug. In Colorado, where marijuana has been legal for years, many companies have even stopped including marijuana on pre-employment drug tests.

On an individual basis, drug use at work may stem from a variety of factors: the stresses of a position, the dislike of a job, sheer boredom, or simply a need or desire to take drugs immediately rather than waiting for later. Some may simply take drugs to stay awake during an exhausting day.

Who’s Really Getting High on the Job? 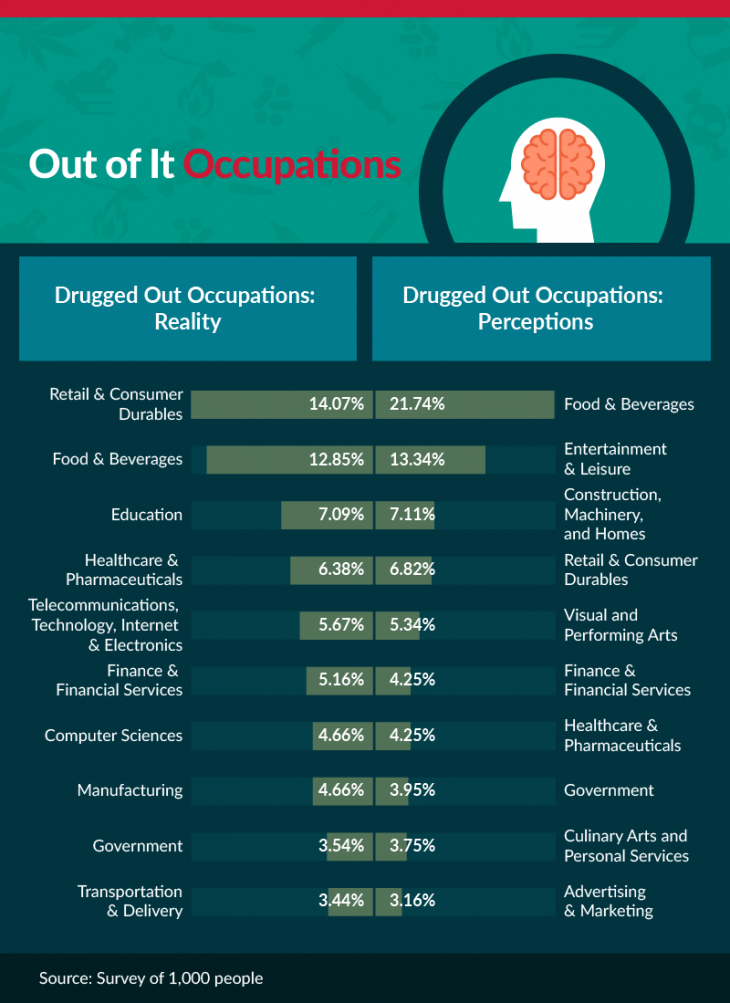 Among respondents who report having used drugs while at work, the retail and food/beverages sectors were the most common. Around 14 percent of those who had used drugs worked in retail, and another 13 percent were in the food/beverages industry. Education (7 percent) healthcare/pharmaceutical (6 percent), and telecommunications (6 percent) were also among the most common sectors for drug use.

Reality doesn’t always match perception. When asked which occupations they believed had a high number of people using drugs, our respondents ranked the food and beverages industry first by far, at 22 percent. They also suspected drug use among those in the entertainment and leisure industry and the construction and machinery sector.

As our survey reveals, some industries may simply get a bad rap for drug use prevalence—particularly the arts and entertainment industry and the food and beverages sector. Is the restaurant staff getting baked before cooking your appetizers? Do the workers at your local stadium get high before the big game? According to our survey, the checker at your favorite grocery store is more likely to do drugs at work than they are.

Making Time for Drugs at Work 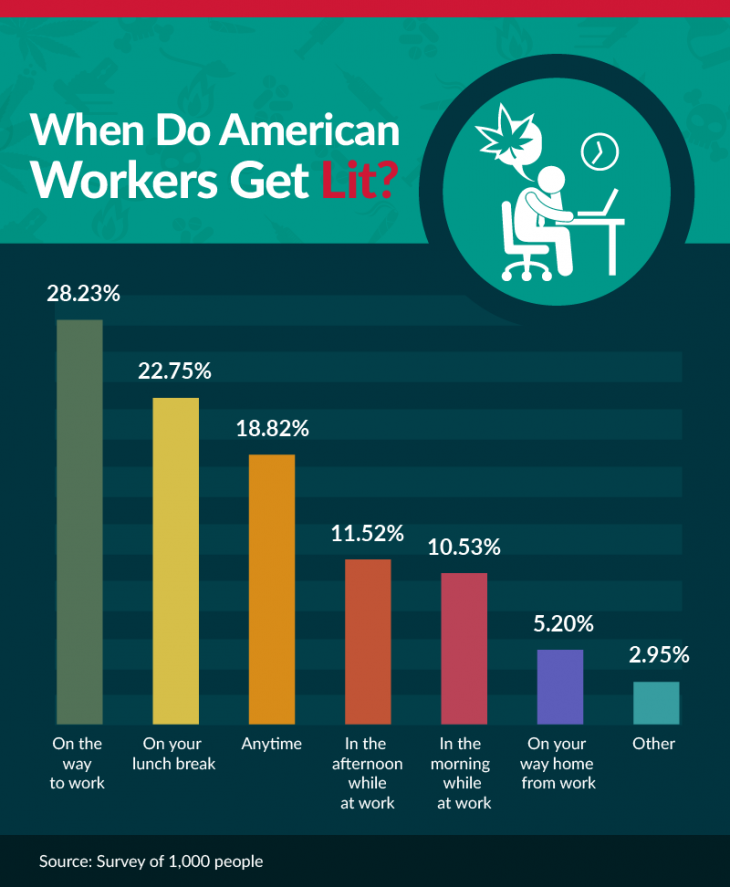 According to one study, workers waste an average of around 34 minutes during each workday. And it seems at least some of these people are skipping the Slack chats and kitten videos in favor of devoting that time to using drugs: According to our survey, many workers use drugs during the workday—around 11 percent in the morning, 12 percent in the afternoon, and nearly 19 percent do it “anytime.”

For many people, though, workplace drug use doesn’t actually mean getting high during the workday. Nearly 30 percent of people who use drugs at work actually do so on the way to work. Another 23 percent use their lunch breaks to get lit, around 5 percent wait until they’re on the way home.

Making Space for Drug Use in the Workplace 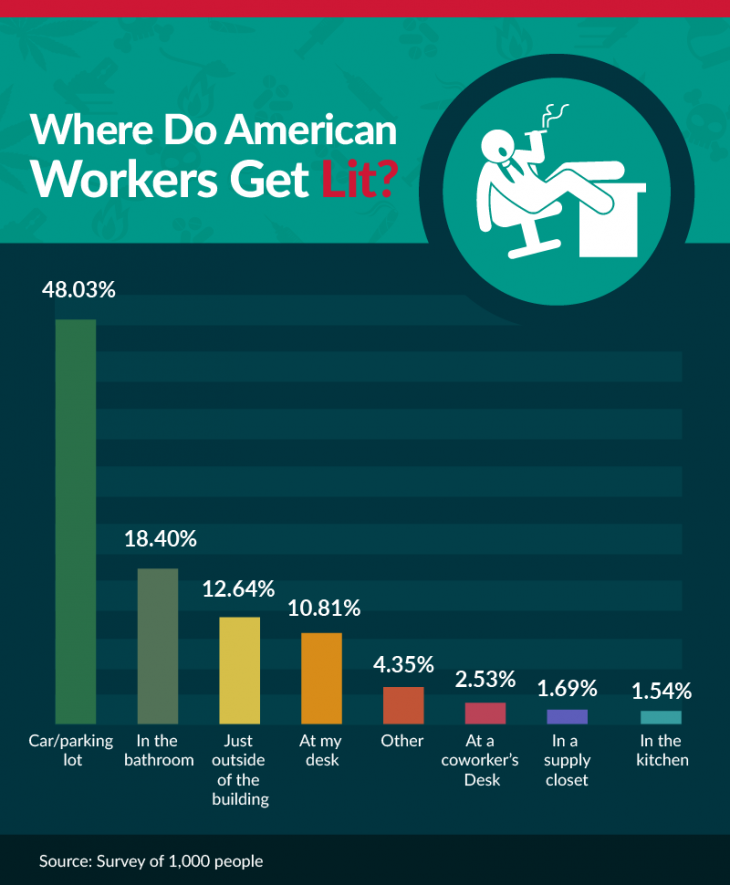 Imagine a boss, coworker, or client walks into your office just as you’re about to light up. For some workers, that may be a reality. Among those who take drugs during the workday, a staggering 11 percent are brazen enough to use drugs right at their desk; another 3 percent do so at a coworker’s desk.

The majority are a bit more discreet: Nearly half move their drug use to their cars or in the parking lot. Another 18 percent duck into the bathroom, while 13 percent choose to head just outside the building. A few will actually hide in the supply closet to avoid being seen.

However, even when workers are discreet about their drug use, many employers are becoming more savvy about spotting telltale signs: among them, bloodshot eyes, noticeable odors, or an employee who walks around a lot without getting much done. Employers also know to watch for frequent absences or people who come in late and/or leave early. 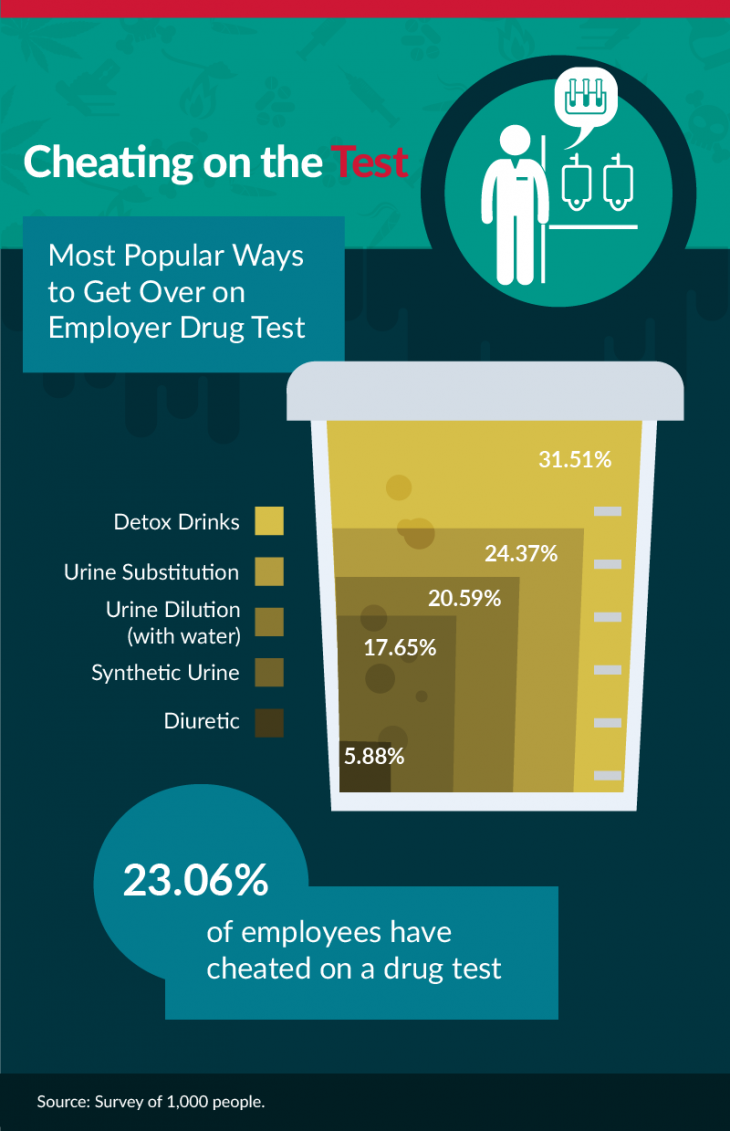 Around 56 percent of American employers make potential workers take pre-employment drug tests. In response, people have turned to various test-busting methods in hopes that their urine will turn up negative.

Among our respondents, gulping down detox drinks was the most popular way to attempt to pass a drug test. Found online or in local stores, these beverages are purported to flush out drug metabolites for a negative urine result.

Swapping urine with a clean sample was another popular method for thwarting the tests, as was diluting urine with water. Using synthetic urine was a slightly less favored way to beat the test (perhaps because it’s not readily available at local stores). The least popular tactic? Taking a diuretic—possibly due to the potential side effects, including headaches, dizziness, constipation, and muscle cramps. 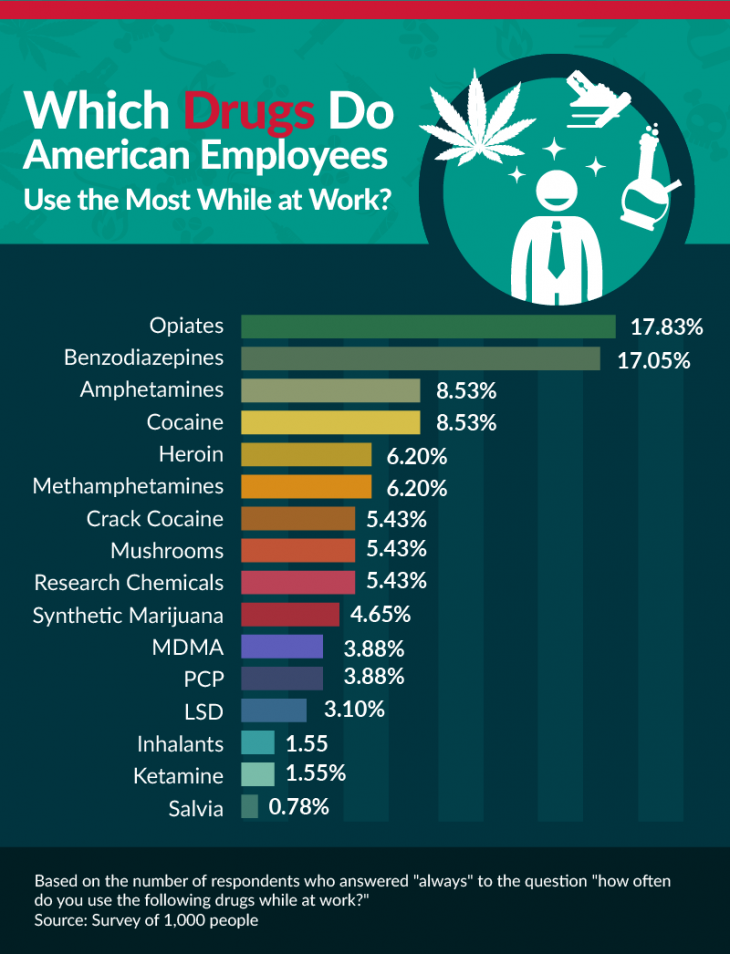 In light of the current opiate crisis, it may come as little surprise that opiates are the top drug our survey respondents report using at work. Though sometimes prescribed by doctors, drugs such as OxyContin, Fentanyl, Lorcet, and Vicodin are much like heroin—highly addictive and potentially lethal. Benzos such as Xanax and Valium are nearly as common on the job among our participants. While not as headline-grabbing as the opiate crisis, the benzo situation has also become a serious concern in the U.S.

Though popping pills may be the simplest and most discreet way to use drugs at work, substances like cocaine, heroin, meth, and crack cocaine all made the list. Among the least common drugs at work were salvia, ketamine, and inhalants.

It’s possible some people choose drugs to take at work based on their effects. On online messages boards, workers swap advice about the pros and cons of taking various drugs on the job. Some mentioned using drugs that increased their focus; others chose substances that helped them to be outgoing, friendly, and polite. And some simply note that due to an addiction, they had to take a specific drug at work or risk an unpleasant withdrawal.

Drug Use Among Coworkers

At many workplaces, collaboration is the name of the game. Among our respondents, about 58 percent say they’ve used drugs with someone else at their workplace. 32 percent choose to get high with co-workers, around 5 percent with a subordinate, and nearly 4 percent with a superior. And nearly 17 percent of these social butterflies have taken drugs with all three.

Beyond just sharing drugs, some people buy and sell illicit substances at work. Coworkers at the same level are the most common when it comes to both buying and selling. However, a surprisingly high percentage of respondents report they’ve sold drugs to coworkers, subordinates, and superiors.

While bosses are generally the least likely to be involved in transactions, still 9 percent of respondents say they’ve sold drugs to superiors and 12 percent say they’ve bought drugs from them. HR would not be pleased.

Making It Through the Workday

As our survey reveals, a surprising number of Americans across a variety of industries are regularly taking drugs at work. A number of factors come into play, from the stresses of the job to the availability of the substances, however one thing is certain: Taking drugs on the job is never a good idea. If you or someone you care about is struggling with addiction, there is help available.