Think smokers mostly chill on the couch and eat chips? No way. Armed with a knack for problem-solving and a vast array of household materials, today’s innovative marijuana fans are designing and crafting creative bongs. From mason jars to apples, aluminum foil to cucumbers, the material possibilities for making bongs, pipes, and other paraphernalia are virtually endless.

To gain unique insights into the fascinating practice of making what is known as “MacGyver bongs (or pipes)”, we surveyed 1,000 men and women about their bong-making habits and engineering prowess. Keep reading to discover all the secrets we smoked out—their go-to materials (including items typically used as food), their ages, their favorite DIY smoking devices to create, and why they embark on this interesting hobby. 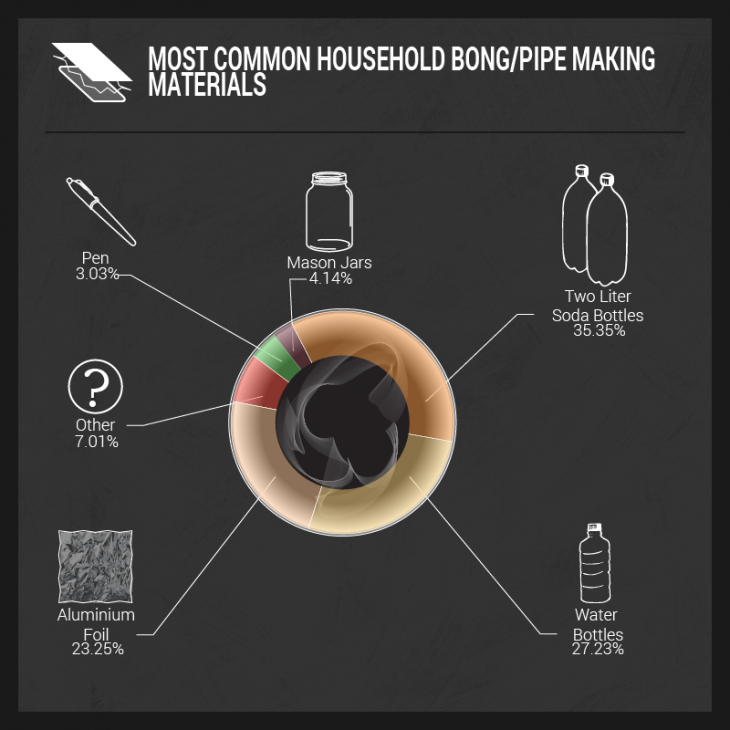 Like MacGyver with his string, bent paper clips, and gum, our survey respondents report that their go-to bong-making materials are actually pretty simple. Smoking devices generally contain three or four components: a chamber, a downstem, a bowl, and sometimes a mouthpiece. Bottles are used to create the chamber, and pen tubes and metal pipes can form the downstem tube. Aluminum foil can be used to craft the pipe (aka “bowl”).

More than one-third of our participants rely on 2-liter soda bottles for their chamber, while just less than one-third prefer water bottles. Only 3 percent use Mason jars. Nearly one-quarter incorporate aluminum foil in their designs, and only around 4 percent make use of pens.

Soda bottles can be used to make a basic bong or paired with large juice bottles to make gravity bongs. However, some experts advise against soda bottles due to the sticky residue and recommend water bottles instead. Aluminum foil is arguably the most controversial material. But while some have worried about ill health effects from using aluminum foil, it is generally believed to be safe.

Bongs Made from Edible Materials 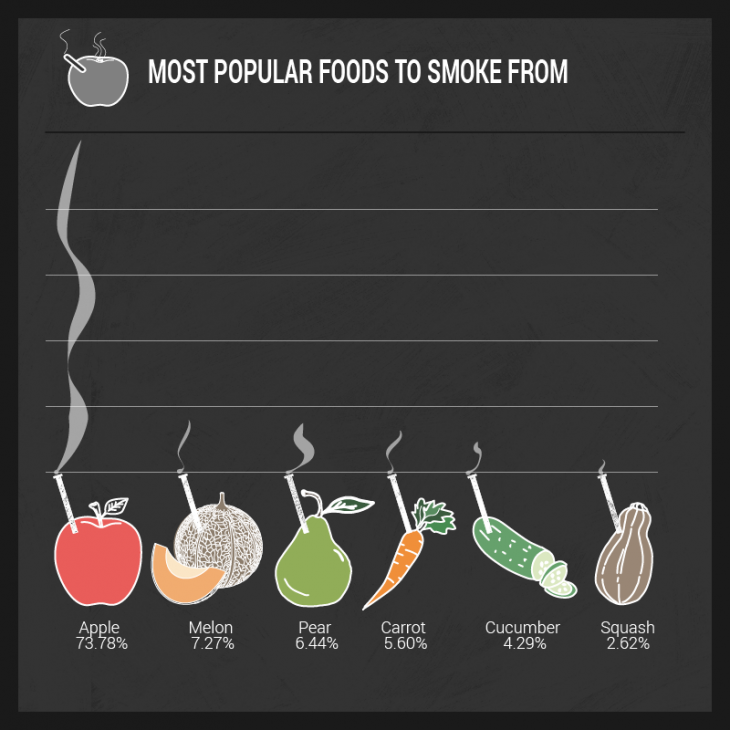 Apples. Melons. Carrots. While that may also sound like the content of a kindergartener’s lunch box, these fruits and veggies are actually popular devices for smoking. Among our respondents, apples win by a landslide: Nearly three-quarters of participants report they’ve made a bong or pipe from the fruit touted to keep the doctor away (this probably doesn’t apply in this case).

Melons, pears, carrots, cucumbers, and squash were the go-to produce for a handful of participants. (Carrots are often used as chillums.) Bananas didn’t make the cut; however, Vice Smokeables offers a tutorial for crafting a makeshift pipe from a banana.

Why fruit and veggies? For one thing, many people generally have these in their fridge or fruit bowl. It’s also touted as a more natural alternative to using, say, aluminum cans. However, there are downsides to using produce: Some require lots of prep to make a pipe or bong (consider the work involved in hollowing out a cucumber), and others are simply not very functional (think gooey bananas). Taste matters, too: One Thrillist writer who tested produce pipes was not a fan of the “distinctly cucumber-tasting residue” left on his lips. 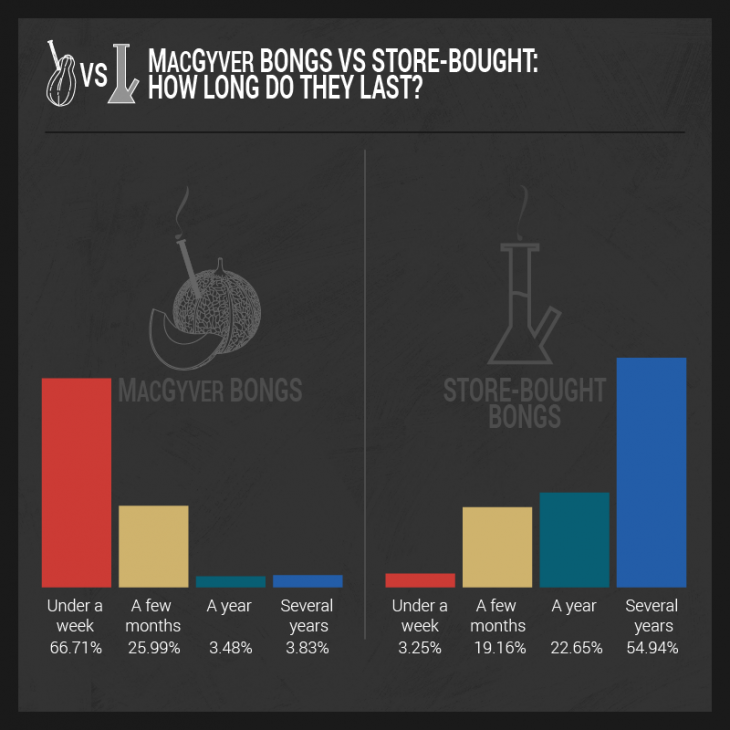 For people who want their bongs for the long haul, a DIY project is probably not the best way to go. Around 67 percent of our respondents reported their MacGyver bongs last less than a week—but only around 3 percent discarded their commercial bong at the seven-day mark.

On the flip side, fewer than 4 percent say their DIY bong is still working several years down the road, while more than half report their store-bought bongs see them through at least a few birthdays. But not every MacGyver bong quickly self-destructs: Just over one-quarter of respondents note that the bongs they created are able to make it a few months.

The nature of MacGyver bongs generally dictates their fates: For instance, someone who simply wants an immediate solution might throw together a quick fruit bong and not expect it to last. However, some enthusiasts care about quality: Rather than soda bottles and fruit, they might use pricier materials, such as glass vases, tire pressure gauge tubes, and rubber grommets.

How Old Are Macgyver Bong Makers? 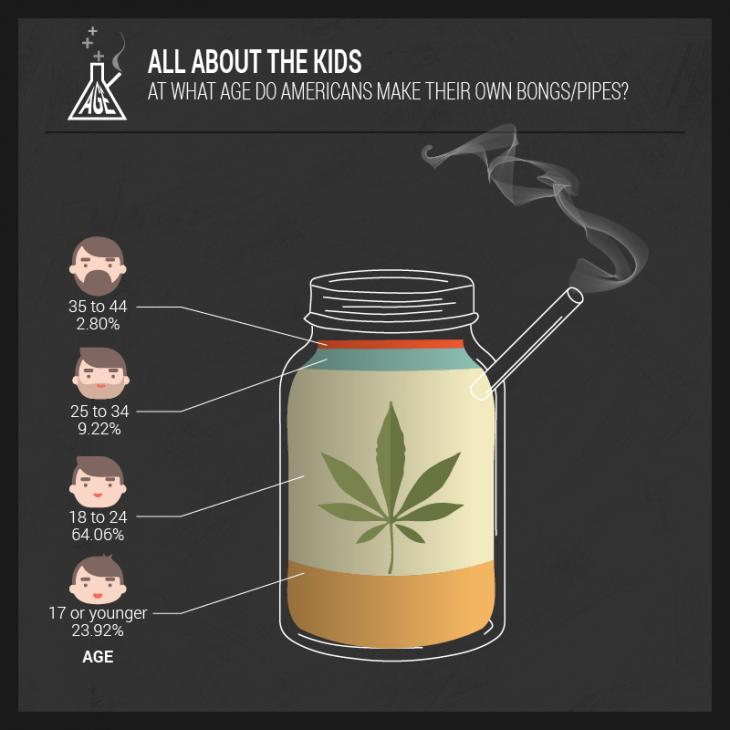 The majority of our respondents who make their own bongs or pipes are young millennials aged 18 to 24. Millennials have been called “the new hippie generation” and “the stoner generation.” The majority of these young adults support legalization of marijuana—even the conservative ones. According to Pew Research, 77 percent of Millennial Democrats and 63 percent of Millennial Republicans think pot should be legal. (One ambitious 22-year-old even makes a living crafting bongs, though they’re made with hand-blown glass rather than fruit.)

Nearly one-quarter of those who make their own bongs are still kids (17 and under). The legal age to purchase tobacco products (including pipes) is generally 18 years old, but in some areas it is 21. For minors, crafting a bong with household materials can be a way to skirt this issue. It’s also the cheapest method in most cases, as well as a tactic that may deter suspicious parents (after all, for a teen, leaving apples lying around is less obvious than stashing a storebought pipe in a bedside drawer).

Fewer than 1 in 10 of our DIY bong makers are aged 25 to 34, and fewer than 3 percent are between the ages of 35 to 44. Interestingly, CDC data reveals that middle-aged parents are actually more likely than their teenage children to smoke marijuana these days. However, it’s safe to assume that older adults have the money and means to get their hands on store-bought bongs. 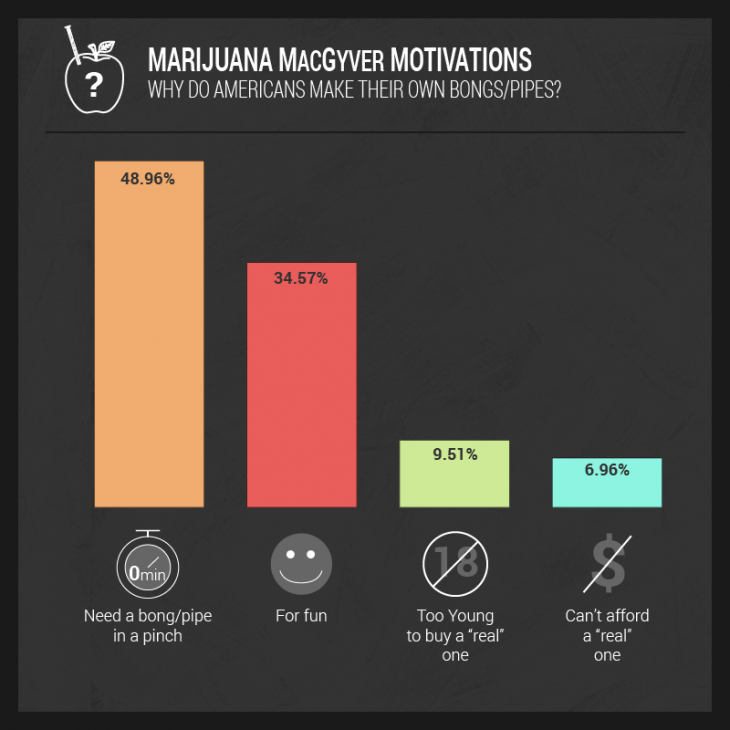 Why would you create a MacGyver bong when smoke shops across the country are filled with regular ones? For nearly half of our respondents, the answer is simple: They want a bong now—not later. Just like people who scrounge together substitute ingredients when they want to bake cookies, for many, gathering household materials and crafting a bong may simply be quicker, more convenient, and more appealing than going to the store.

Another 36 percent do it for fun. Like any hobby, MacGyver bong making has a legion of passionate fans. These enthusiasts might frequent message boards dedicated to stoner engineering, read tutorials for new ideas, and watch videos to master the art of bong making. Interestingly, fewer than 1 in 10 say they make bongs because they’re not old enough to buy them—and only 7 percent cite cost as their motivation. 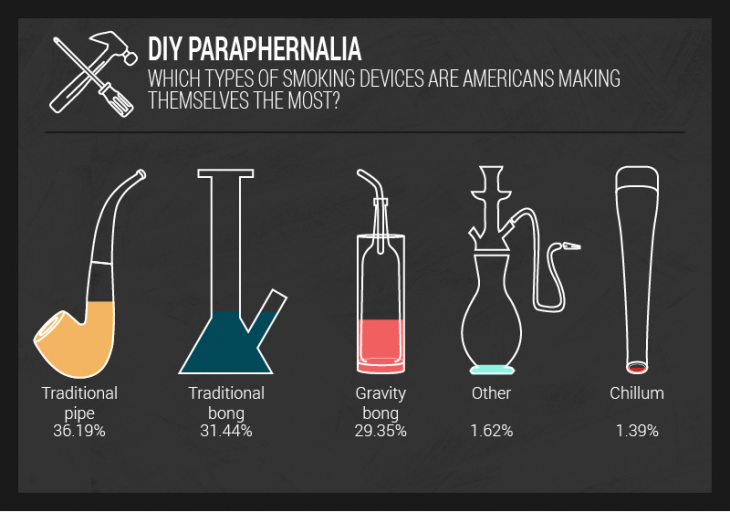 After gathering their soda bottles and aluminum foil and fruit and pens, what types of paraphernalia are people making? Just over one-third of our respondents craft traditional pipes, while just under one-third are making traditional bongs. Around 3 in 10 are creating gravity bongs, which involve submerging one vessel into another to actively propel smoke into the lungs. Fewer than 2 percent create chillums, which are straight and slightly cone-shaped pipes.

What Other Materials Work for Making Bongs? 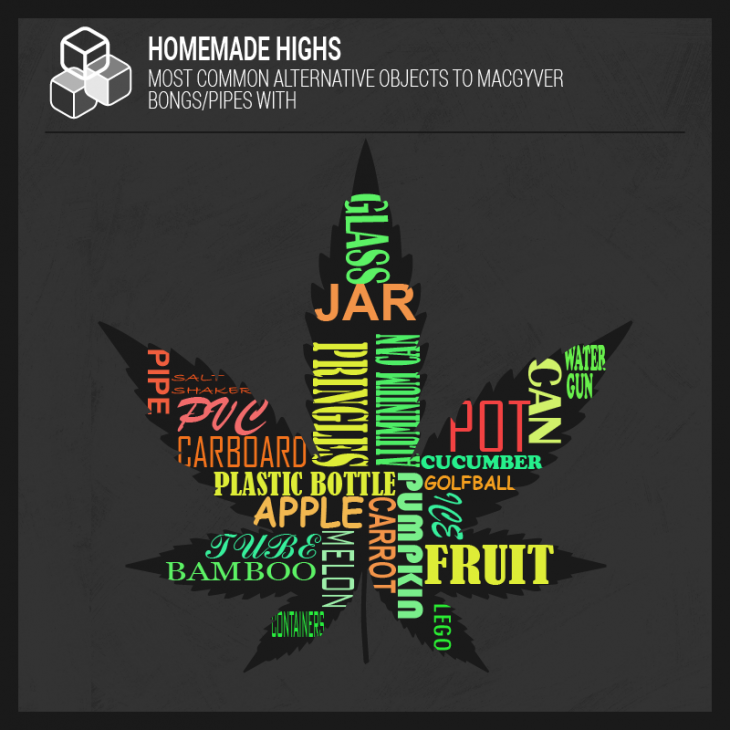 Our survey respondents also mentioned alternative materials to those already covered above. While these items weren’t quite popular enough to make the cut in the main graphs, the above word cloud provides intriguing insights.

Pumpkins stand out as a favorite alternative fruit. Halloween is a popular time to carve a jack-o’-lantern-style bong—and according to experts, a pumpkin can basically be treated like an oversized apple. Oranges also appear to be a popular alternative. However, when comparing apples to oranges, it’s clear why apples come out on top: Along with being juicy and sticky, oranges don’t have a natural bowl shape like apples do, so a little carving is necessary. Bananas, peppers, strawberries, lemons, limes, and eggplants are also alternate produce options..

As for vessels, it seems milk jugs, various glass and plastic containers, buckets, and even Pringles tubes can be used in place of soda bottles, water bottles, and Mason jars. Some people take it up a notch, relying on materials that are less household and more hardware store: copper, PVC, fittings, and plumbing materials.

With the increasing legalization of marijuana, it’s easy to take a lax attitude about the drug. But the fact is, marijuana is a drug—and like any drug, it is possible to overdo it. Marijuana can be addictive, it can interfere with your daily life and relationships, and you may experience withdrawal symptoms if you try to quit. If you or someone you love needs a hand getting a marijuana habit under control, visit Detox.com today for the help you deserve.

We surveyed 1,080 people in the United States who reported using marijuana. Our respondents chose to participate in the survey and the only qualifiers were that the people surveyed had to have used cannabis.