As of 2011, as many as 42 million Americans reported having tried heroin on at least one occasion. According to the National Institute on Drug abuse, an estimated 23 percent of those who try heroin will become dependent on the drug. Heroin’s wrenching effects on the mind and body of the individual make this particular addiction difficult to conceal. Anyone who becomes dependent on the drug will likely need heroin detox treatment.

Once a person reaches a certain point, heroin detox may be the only way to regain control of his or her life. Heroin detox specifically addresses the physical, psychological and behavioral changes caused by heroin use. The sooner an addict enters heroin detox the better the chances of recovering from the effects of the drug. Call 800-483-2193(Who Answers?) to find heroin detox centers near you!

Anyone concerned about an encroaching heroin addiction may want to keep a look-out for the following signs.

Not surprisingly, the brain readily accepts heroin much like it accepts its own morphine chemicals. In the process, the brain stops producing its own regulating chemicals and becomes dependent on heroin supplies. Signs of heroin addiction stem from the drug’s effects on the brain.

Physical signs of heroin addiction develop from the brain’s inability to regulate chemical processes in the body. Without heroin detox treatment, a person’s condition will grow progressively worse.

Physical signs of heroin addiction include:

Ongoing heroin use disrupts vital chemical processes in the brain. These processes not only regulate bodily functions, but also psychological or cognitive functions. 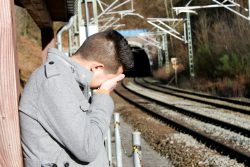 Don’t let heroin take over your life! Get help today!

Psychological signs of heroin addiction include:

As addiction takes hold, a person’s interest in getting and using heroin will become more pronounced. In the process, he or she will start to neglect other responsibilities. At this point, friends and family may start to wonder if heroin detox treatment is needed.

Heroin abuse can make you lose your job, your family, and everything that matters to you. Call now to seek treatment help.

Compulsive drug-seeking behaviors inevitably transform a person’s lifestyle to where heroin becomes the focus of everything a person does.

Changes in lifestyle commonly take the form of:

Removing the focal point of the addiction lifestyle becomes the primary objective of heroin detox treatment.

It’s all but impossible to miss the signs of addiction in someone with a long history of heroin abuse. Signs of long-term heroin abuse include:

At this point, any remaining friends and family will insist the addict seek out heroin detox treatment.

You can find heroin detox centers by searching our directory, or by calling our treatment helpline: 800-483-2193(Who Answers?).