Krokodil is the street name for an opiate analog called desomorphine. Touted as being 10X more potent than morphine and equally lethal, Krokodil gains its name as a result of the toxic effects that this drug has on a user’s body. Dark, scaly, green infections are common in chronic Krokodil users–an image similar to a crocodile. 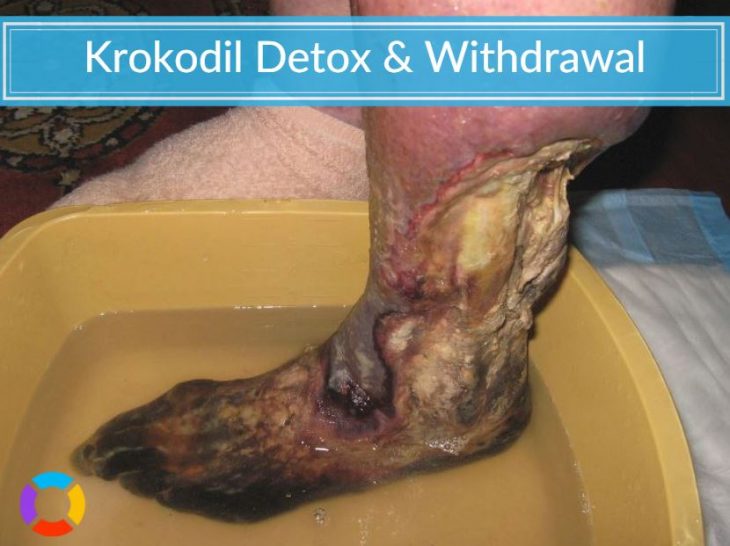 This flesh-eating drug was widely abused throughout Russia for many ten years but only recently made its debut in America in 2013. Ohio, Arkansas, and Illinois are among some of the first states to document the use of this dangerous opiate. Also called a “zombie drug,” Krokodil essentially eats human flesh from the inside out.

You may ask, “WHY would someone want to use a drug that will create an immediate addiction that is certain to end in death?” You’re not alone! According to NIDA, “many people don’t understand why or how other people become addicted to drugs.” Unfortunately, drugs change the way the brain works making quitting even more difficult for those who abuse them.

The fact is, people don’t generally say “I want to be an addict.” But, they use drugs not realizing the potential for addiction to occur. They think “It won’t happen to me.” But it does. And once addicted, quitting becomes a challenging effort that requires medical attention, support from friends, family, and peers, and a STRONG will to survive.

Unfortunately, First Coast News mentions that extreme risk of Krokodil being like NO-OTHER opiate. Users are almost certain to become addicted due to the mere power and potency of the drug and they have a 1-2 year life expectancy following their first dose. No other drug at this time has such a rapid rate of creating dependence and subsequent death.

Desomorphine originates in Switzerland where it was synthesized for pain relief in the 1930s. In the US, Krokodil became a controlled substance in 1936. It continued to be used in Switzerland for about 20 years before researchers realized the strong potential for Krokodil use to lead to addiction. As a result, Krokodil was removed from medical use in 1952 and has since been labeled a Schedule 1 substance by the DEA and has NO ACCEPTED MEDICAL USE.

Krokodil ran under the radar for the next 60 years. Recent rises in opiate abuse have caused this powerful synthetic opioid to make a rapid comeback. Russia has reported increased use of the drug since 2002. In the US, desomorphine abuse was initially spotted in Arizona but has since spread throughout the country.

How is Krokodil Made?

Desomorphine (4,5-a-epoxy-17-methylmorphinan-3-ol) has a similar chemical structure to morphine but is much more powerful. The active ingredient in the street version of Krokodil is Codeine. Codeine is a mild opiate that is commonly sold over-the-counter in many countries outside the United States.

Codeine, alone, is not too dangerous except in high doses. But when it is mixed with other dangerous substances and ingredients such as paint thinner and hydrochloric acid it becomes lethal. Krokodil is a mixture of these substances as well as red phosphorus which can be found in the strike pad of a matchbox according to Time Magazine.

When these ingredients are mixed together they create a horrible smelling liquid that produces powerful effects similar to heroin at a fraction of the cost. Users report Krokodil costing about 1/5th or less than heroin but equally or more potent.

The most notable effects of Krokodil abuse are seen on the skin. Users appear to be rotting from the inside out. Short-term effects of Krokodil use appear much like those of any other opiate abuse. Shallow breathing, pinpoint pupils and euphoria are common. Chronic use leads to:

Abusing this powerful drug has its own set of serious dangers separate from those that are evident with most opiates. Repeat use most certainly leads to death within 12-24 months of the initial use. This is because chronic Krokodil abuse causes widespread, flesh-eating infections that often result in the need to amputate. Eventually there is nothing left to amputate and the user dies as a result of his or her substance abuse. 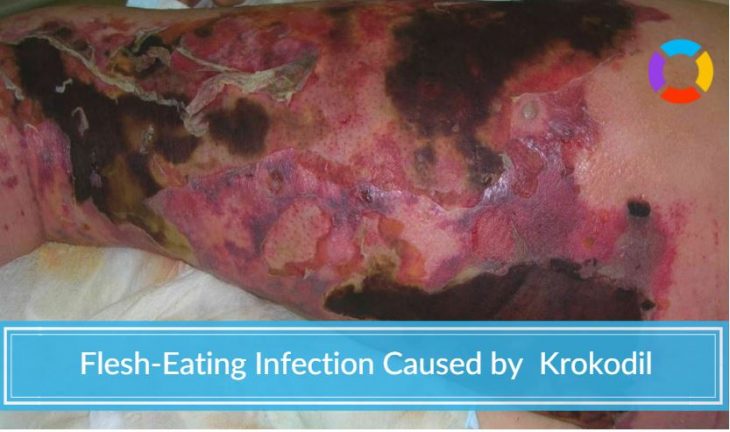 Like other opiates, repeat use of Krokodil can lead to a heightened risk of HIV, AIDS, Hepatitis C and other disease that can be contracted through shared needles. Addiction develops quickly with this opiate and the decision to quit is not enough to get sober on your own–if you or someone you love has abused Krokodil or other opiates, call our helpline at 800-483-2193(Who Answers?) to find a local detox center that will help you get sober in a safe, pain-free medical facility.

Physical dependence develops rapidly when abusing Krokodil. In fact, users report an almost immediate addiction to the drug due to the powerful nature. Most users are already addicted to an opiate such as prescription painkillers or heroin prior to using Krokodil. Regardless, once addicted to Krokodil the process of getting sober requires a walk through withdrawal first.

Opiate withdrawal is a well-documented process that generally follows a relatively predictable timeline. Upon immediate discontinuation of Krokodil or any opiate, the user will notice symptoms of withdrawal within the first 6-24 hours. The amount of time it takes for symptoms to appear depends on the half-life of the drug (the amount of time it takes for half of the drug to be eliminated from the system.)

The half-life of Krokodil is 1-hour. As such, repeat use is highly common because users begin to feel the effects of withdrawal within just 1 hour of the dose. After 4 hours following the last dose, heightened withdrawal symptoms are in full swing.

While the rate at which withdrawal begins for Krokodil users is much faster than for those who use morphine (which has a significantly longer half-life and therefore generally does not produce withdrawal symptoms for up to 12 hours following the last dose), once symptoms of withdrawal begin, the timeline is mostly the same as any other opiate. It appears something like this: 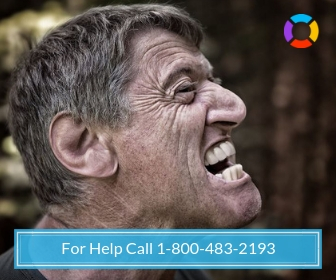 Opioid withdrawal can be very painful, but it doesn’t have to hurt. Many treatment options are available to ease symptoms of withdrawal so that you can focus on recovery and healing. While you MUST pass through the period of withdrawal in order to recover, you do not have to pass through without help.

Krokodil detox will help to stabilize you in preparation for recovery in a rehab center. Although opiate withdrawal is generally non-life-threatening, it can be highly uncomfortable and potential dangers may arise unexpectedly. Some of the potential risks of detox, which are best treated in an inpatient detox center, include:

Safe, medical detox centers are available to help you stabilize and break free from Krokodil addiction. You don’t have to feel horrible during withdrawal, that’s a myth. In fact, detox professionals can help you to feel at ease and even comfortable during these early days of recovery–but you have to call for help. Our helpline is available 24 hours a day, 7 days a week to support you. Call 800-483-2193(Who Answers?).

Each of these medications increases the retention rate and overall effectiveness of detox and rehabilitation treatment efforts. If you’ve been abusing Krokodil or other opiates long-term, a maintenance medication that treats addiction beyond the withdrawal period can help you to stay sober. According to the Journal of Addictive Diseases, “methadone, buprenorphine, and naltrexone are each FDA approved for the long-term treatment of opiate addiction.”

Additionally, some medications can be utilized during the withdrawal period to ease symptoms that are uncomfortable or otherwise unwanted. The following medications may be provided to you during Krokodil detox:

Some try to detox at home or without supervised help, but it’s important to accept and admit that you cannot do it alone. Opiate withdrawal is a painful process that generally leads to failure for those who try to get sober without professional help. However, medical detox can make an uncomfortable process much easier and safer too.

Call our helpline toll-free at 800-483-2193(Who Answers?) for help getting sober. We realize it’s scary and that you probably fear what will happen when you call, but this call could literally save your life.