China recently announced its plans to add two new dangerous chemicals to its list of controlled substances in an effort to help the U.S. curb its opioid epidemic. The chemicals, known as NPP and 4-ANPP, are two main ingredients used to make fentanyl analogues, or synthetic fentanyl, which has been linked to a number of fentanyl overdoses in the U.S. When approved by the State Council, this new restriction will make it more difficult for black market laboratories in China to produce and distribute fentanyl. 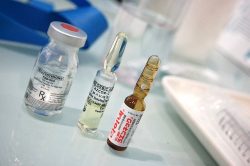 Certain fentanyl chemicals will be banned in China in an effort to combat opioid abuse.

Fentanyl is an opioid drug between 50 and 100 times stronger than morphine. But fentanyl entering the U.S. from China is entirely synthetic, and made with a combination of strong, dangerous chemicals that can instantly trigger an overdose. At present, China is home to a large number of chemical and pharmaceutical companies that produce mass amounts of synthetic fentanyl.

In July 2017, Chinese agencies including the Ministry of Public Security, FDA, and the National Health and Family Planning Commission added four fentanyl substances to its list of controlled non-medical drugs. Hua Zhendong, technical director of China’s National Narcotics Laboratory, says these four fentanyl substances had been detected in several parcels that were making their way to the U.S. In a recent press release, China’s Narcotics Control Bureau announced that the new fentanyl chemicals NPP and 4-ANPP will be joining other fentanyl analogues on the list of dangerous substances banned in China earlier this year.

In recent months, the China Narcotics Control Bureau has strengthened ties with the United States DEA to share intelligence, evidence, and investigations surrounding the manufacturing and distribution of fentanyl. China is also working with over 20 countries including the U.S. and Canada to reduce the number of crimes involving new psychoactive substances — including fentanyl.

Synthetic fentanyl caused over 20,000 overdose deaths in the U.S. in 2016, and is projected to cause an even higher number of deaths in 2017. The DEA states that the majority of synthetic fentanyl is entering the U.S. via the Mexico border and shipments from China. Anyone in the U.S. with access to the Dark Web can easily purchase fentanyl from China at a low cost, and have it shipped directly to their doorstep.

Fentanyl from China is impure, and made with a cocktail of deadly chemicals not meant for human ingestion. Each batch of fentanyl differs from the next in terms of potency and purity — making it difficult for users to prevent an overdose. The DEA says that some batches of fentanyl are so strong that first responders like police can overdose on the drug just by touching or inhaling the substance.

Using synthetic fentanyl can quickly lead to physical dependence and addiction, and substantially increases the risk for a drug overdose. Keeping synthetic fentanyl in the home can be deadly, and even puts pets and family members at risk. But getting help for fentanyl addiction can save your life, or that of your loved one struggling with opioid addiction.

Fentanyl addiction can be safely and effectively treated at any opiate detox center using a medical detox, medication-assisted treatment, and therapy. A medical detox allows you to withdraw from synthetic fentanyl, heroin, and other opioids under close medical supervision to lower the risk for complications. A medical detox usually involves the use of medications that eliminate your withdrawal symptoms, and lasts an average of 10 days.

Medication-assisted treatment also involves the use of medications that reduce opiate withdrawal symptoms, but can be conducted over the course of several weeks or months for a more gradual withdrawal. Patients who receive opiate detox can also receive therapy to learn strategies for overcoming cravings and psychological causes of addiction.

If you or someone you love is fighting opiate addiction, understand that help is available and nearby. Call our 24/7 confidential helpline at 800-483-2193(Who Answers?) to speak with an experienced addiction specialist who can discuss all your options for opiate detox, and help you find a nearby detox center.