Opiant Pharmaceuticals, the manufacturer of opioid overdose reversal drug Narcan (naloxone), has announced it developed a new version of the drug powerful enough to revive fentanyl overdose victims. The new overdose reversal drug for fentanyl is called nalmefene, but will be sold under the brand name Revex when ready and approved by the FDA in 2020. Scientific trials show Revex is more effective than Narcan at reviving people who overdose on fentanyl.

How Does Revex Work to Reverse a Fentanyl Overdose? 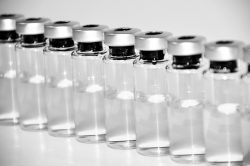 People who overdose on strong opioids like fentanyl and carfentanil will usually stop breathing and lose consciousness. Heroin, fentanyl, and painkillers will bind to opioid receptors in the brain to produce effects like pain relief, sedation, and euphoria. At the same time, opioids slow down breathing and can lead to respiratory depression when people use too-high doses.

Revex reverses an overdose by blocking the effects of opioids on receptors to instantly revive overdose victims. Opioids were linked to more than 53,000 overdose deaths in 2016 — over 20,000 of which were caused by fentanyl.

What’s the Difference Between Revex and Narcan?

Revex works in exactly the same way as Narcan to reverse an opioid overdose, but has a longer half-life — meaning the drug produces effects that last longer than Narcan. The half-life of Narcan is only two hours, while the half-life of Revex stands strong at between 6.7 and 7.8 hours.

Fentanyl is up to 100 times more potent than morphine, while carfentanil is up to 10,000 times more potent than the drug. Fentanyl and carfentanil have an average half-life of between seven and 10 hours, and usually call for repeated doses of Narcan to prevent victims from suffering back-to-back overdoses. Some fentanyl overdose victims still die after being treated with Narcan — especially when family and first responders have limited doses on hand. But Revex may be able to revive these victims with just one dose.

Nearly 2.5 million Americans are dependent on opioids like fentanyl. The majority of opioid overdoses are unintentional and accidental, and can happen to anyone who uses these drugs for any reason — whether it be for recreational use or for legitimate medical reasons. Having an overdose reversal drug for fentanyl like Narcan or Revex on hand can save lives, and give people another chance to get help and become clean.

Narcan is commonly used in addiction treatment settings to keep opioid patients safe from unintended overdoses, which can sometimes happen when opioid medications are used as part of drug detox. Patients who start using new medications can take naloxone to counter any overdose effects and reduce the risk for relapse and overdose.

Narcan can be obtained at pharmacies by anyone without a prescription in 41 states. If you or someone you love is addicted to fentanyl, heroin, or painkillers, ask your local pharmacy about state laws surrounding purchasing Narcan. The drug is available as a nasal spray or injection, and can be used to save your life, or that of your loved one in the event of an overdose.

Recovering from opioid addiction can be difficult and dangerous to do on your own without professional help. Call our 24/7 confidential helpline at 800-483-2193(Who Answers?) to speak with an addiction counselor about nearby drug detox centers that treat opioid addiction. We’ll help you find the nearest opiate detox center ready to help you or your loved one achieve improved health and lifelong sobriety.