Native Americans and Alaska Natives experienced a five-fold increase in the number of opioid overdose deaths between 1999 and 2015 — an increase higher than that for any other ethnic group. Officials are even saying the death count may be as much as 35% higher than what statistics show, since death certificates often list some Native Americans as belonging to other races. Opioid overdose deaths are putting excess strain on tribal communities across the U.S. — many of which already lack financial resources and treatment options before taking the opioid crisis into consideration. 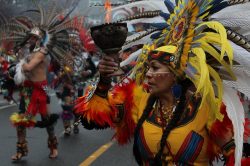 Public affairs managers for Native American tribes say the majority of tribes do not have access to funding from Congress that is allocated for opioid addiction treatments. Most tribes are self-sufficient sovereign nations, with many tribal members lacking jobs that provide health insurance. Yet, the Indian Health Service only spends about $3,330 on each Native American addiction patient, which is roughly one-third of the national average spending of $9,200 per patient on those who are not Native American tribal members.

Lawmakers have suggested that the 21st Century Cures Act be updated to give tribal members greater access to federal resources for addiction treatment and overdose prevention, but at this time, no hearings are scheduled. Secretary of Interior Ryan Zinke has announced that the federal government plans to send first-responder kits with naloxone directly to tribes, and that a special task force will be formed to help tribal leaders and police identify and prosecute local drug traffickers contributing to local opioid overdoses.

Why Are Native Americans Vulnerable to Substance Abuse?

Native Americans tend to be more vulnerable to addiction than other ethnic groups due in part to limited socioeconomic opportunities. Native Americans often suffer high rates of unemployment and poverty, have lower education levels, and commonly lack health insurance and access to healthcare. Other factors that contribute to high rates of substance abuse among the Native American population are cultural loss, historical trauma, violence, racism, and discrimination, among many more.

In 2013, nearly 15% of all Native Americans in the U.S. over the age of 12 was diagnosed with a substance use disorder, which is higher than the rate for any other ethnic group. In comparison, substance abuse affected only 8.6% of Hispanics, 8.4% of Caucasians, and 7.4% of African-Americans.

Getting Help for Addiction as a Native American

When choosing a detox center, look for facilities that acknowledge the importance of incorporating Native American cultural and spiritual traditions into treatment. You may also want to choose programs that offer family therapy or that involve other tribal members in the recovery process, and that offer social services such as child care and transportation to the treatment center.

If you are a Native American who needs help recovering from addiction, call our 24/7 confidential helpline at 800-483-2193(Who Answers?) to receive assistance with finding a treatment center. We’ll discuss your available treatment options, and help you find affordable treatment on behalf of sliding scale fees, tribal funds, and other discounts, grants, and scholarships for which you might qualify.