Fentanyl is one of the deadliest drugs in the U.S., and can cause an overdose in anyone who comes into contact with the drug — including first responders like law enforcement. A new bill is requesting that Congress invest millions of dollars into purchasing small handheld devices that can detect and identify fentanyl without direct contact. If the bill is passed, law enforcement can use these devices to prevent fentanyl from crossing U.S. borders, and help curb the nation’s opioid epidemic while saving thousands of lives in the process.

Detecting Fentanyl to Save Lives 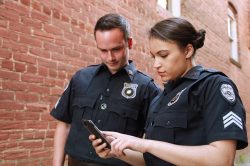 Giving law enforcement access to TruNarc could save thousands of lives.

Fentanyl is an opioid drug up to 100 times stronger than morphine, and can instantly trigger an overdose in anyone who breathes or touches the substance. But a new handheld drug scanner called TruNarc can detect fentanyl in the lab or field without coming into direct contact with the drug. When activated, TruNarc uses a built-in laser to read the molecular fingerprint of every substance it detects, and compares it to other drugs in the database so the substance can be properly identified.

Initially, the TruNarc drug database contained unique fingerprints for only 115 substances. Today, the database contains fingerprints for 415 substances, and continues to grow as users submit new readings to the TruNarc lab for evaluation. A recent study conducted at Marshall University shows that TruNarc provides consistent results 84% of the time, but the device’s manufacturer says that results will become more consistent as the drug database continues to grow.

The TruNarc device was introduced in 2012 by Thermo Fisher Scientific Inc., and costs $22,000. In Spring 2017, Massachusetts Senator Ed Markey introduced the Interdict Act, which requests that Congress buy handheld devices like TruNarc to help law enforcement prevent fentanyl from entering the U.S. But now that the opioid epidemic is a public health emergency, Markey’s bill has been stalled in the Senate since there are limited funds available to address the opioid crisis.

Fentanyl Use is Rising in the U.S.

Illicit fentanyl sold on the streets is known as synthetic fentanyl, or fentanyl analogues. Each batch of fentanyl is different from the next, and contains a cocktail of chemicals that can lead to an overdose or death after just one use. Devices like TruNarc could help detect every unique batch of fentanyl, and prevent new fentanyl mixtures and substances from entering the country.

Additionally, many coroners across the U.S. lack resources to run toxicology tests on drug overdose victims, which makes it difficult for state officials to pinpoint which substances are causing overdoses. But TruNarc can help identify substances that are triggering overdoses so the right steps can be taken to eliminate deadly drugs from U.S. streets.

Getting Help for Fentanyl Addiction

Fentanyl is highly potent, and can trigger an overdose at any time even in those who are tolerant to high doses of heroin, fentanyl, and all other opioids. If you or someone you love is struggling with fentanyl or opioid addiction, getting help now at an opiate detox center can greatly reduce the risk for a deadly overdose.

Fentanyl addiction can be safely, comfortably, and effectively treated using a medical detox or medication-assisted treatment. Both detox methods help you overcome physical dependence on fentanyl and other opioids, and involve the use of medications that completely relieve withdrawal symptoms. Medical detox and medication-assisted treatment can help you stay sober by eliminating drug cravings, and lowering your risk for a relapse.

To find an opioid detox center near you, call our 24/7 confidential helpline at 800-483-2193(Who Answers?). Our experienced addiction specialists will discuss all your opioid treatment options, and help you find the nearest opiate detox center ready to help you achieve lifelong sobriety.