As the U.S. opioid death toll continues rising, 12 states are expanding their Medicaid programs to cover alternative pain treatments. Acupuncture, yoga, and massage will now be offered to treat pain in those who want non-opioid treatments, or who meet risk factors for opioid dependence and addiction. States being hit hardest by the opioid crisis like Ohio and Vermont are hoping these Medicaid changes can help lower the number of opioid overdose deaths on both the state and national levels.

States that expanded their Medicaid programs under Obamacare have recently come under fire since data shows enrollees are using more than two times the amount of opioids than those with private health insurance. More than 15% of all Medicaid enrollees have at least one opioid prescription, and people on Medicaid are 5.7 times more likely to die from opioid overdoses than the general population. In 2012, Medicaid paid for over 34 million opioid claims.

Alternative pain treatments that may soon be available under Medicaid: 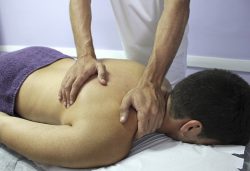 Massage and acupuncture may soon be available under Medicaid.

During acupuncture treatment, a series of fine, tiny needles are inserted into the skin at points that release endorphins and boost serotonin levels to naturally relieve pain. An acupuncturist usually inserts between four and 10 needles into the skin and leaves them in place for up to 30 minutes while patients rest. Pain normally goes away within three months after attending between six and 12 treatment sessions.

Massage therapy stimulates endorphin and serotonin production much like acupuncture does to relieve pain, while yoga uses a combination of meditation, breathing, and muscle-strengthening movements to reduce pain. Cognitive-behavioral therapy changes the way a person thinks about pain so the body and brain can cope with and respond better to pain.

While the Vermont study produced positive results in regards to using acupuncture to help curb the opioid crisis, U.S. policymakers remain hesitant to replace opioids with alternative pain treatments citing lack of scientific evidence as the reason. Lead study author and acupuncturist Robert Davis says acupuncture alone may not be enough to solve the opioid crisis, but that the treatment has been proven effective at reducing feelings of pain, depression, and fatigue in patients.

Opioid dependence and addiction carry a number of serious health risks that can actually worsen pain. Pain sensitivity is a common side effect of opioid dependence, along with respiratory failure and death. Opioid dependence can be safely and effectively treated at an opioid detox center.

Many opioid detox centers treat opioid dependence using a medical detox or medication-assisted treatment. Both treatment methods involve the use of medications that fully eliminate all opioid withdrawal symptoms while helping you overcome dependence. Opioid detox treatments are safe, and conducted by medical professionals who monitor your vitals, reduce the risk for complications, and teach you how to avoid relapse.

If you or your loved one is addicted to prescription opioids and use Medicaid, understand you may be eligible to receive a free opiate detox. Call our 24/7 confidential helpline at 800-483-2193(Who Answers?) to discuss all your treatment options, and to find the nearest detox center ready to help you achieve sobriety.