Bicodone is a brand name medication that contains hydrocodone bitartrate. Hydrocodone is a potent opioid drug that has been considered for many years to be one of the most (if not the most) abused opioid on the market. Normally, drugs like Bicodone are prescribed to treat moderate to severe pain, but many people misuse them because of their ability to create euphoria when taken in high doses. Those who become dependent or addicted often require professional Bicodone detox treatment.

However, even someone who takes Bicodone exactly as prescribed for at least a few weeks could easily become dependent on it. This leads many people to take higher doses than prescribed in order to maintain their need to use the drug every day, and addiction will soon follow. The government is putting forth a number of changes in order to minimize the issue of Bicodone and other types of opioid abuse, but still, it continues to be one of the most serious substance abuse problems in the United States.

Hydrocodone, according to the National Library of Medicine, should only be prescribed to treat those who have severe, around-the-clock pain and who will need to take the drug consistently in order to treat it. However, many people are prescribed a high-strength opioid-like Bicodone even if they do not require it. This is just one of the ways a person can become dependent on the drug, which can lead to a host of other issues.

There are many ways in which the government is trying to curb this abuse. For example, the Drug Enforcement Administration cut the number of prescription opioids being produced in the country by 25 percent. However, many people are still abusing Bicodone and drugs like it.

Most doctors who treat patients with this medication are careful to wean their patients off the drug afterward. However, if this does not occur, the patient can experience severe withdrawal symptoms.

Bicodone withdrawal occurs when an individual who is dependent on the drug is not weaned off it properly. This often happens when the person does not realize they are dependent, as stated by the NLM, and because it feels similar to the flu, the person may just think they are sick. People who have been abusing the drug will also withdraw if they are unable to obtain more.

Though not as life-threatening as some other withdrawal syndromes, Bicodone withdrawal can be uncomfortable and even extremely painful. In addition, those who do not go through the proper treatment for opioid withdrawal often relapse back to abusing the drug.

Signs and Symptoms of Bicodone Withdrawal

Opioid withdrawal symptoms are fairly similar across the board, and Bicodone is no exception to these. When a person stops taking the drug after becoming dependent, they will experience uncomfortable symptoms that, as a whole, feel similar to a very bad case of the flu. The severity of the symptoms will fluctuate depending on the person, but you should be able to recognize the symptoms listed below in someone going through Bicodone withdrawal. 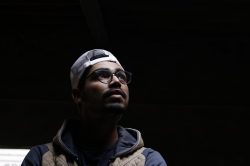 The symptoms are extremely disagreeable and can even become intolerable in some instances. The dependent individual isn’t used to experiencing pain and the vomiting, sweating, and runny nose all give the illusion of going through the flu. In addition, the individual will become very anxious and agitated at not having more of the drug. In some cases, they could become extremely depressed. If they were abusing the drug, cravings will also occur.

According to the World Health Organization, long-acting opioids such as hydrocodone will often produce withdrawal symptoms about 12 hours after one’s last use of the drug. This is because the drug’s effects last longer than others, such as heroin, which causes withdrawal effects to occur less than 8 hours or so after one’s last use.

In most cases, Bicodone withdrawal will last about a week or two.

After the general timeline of withdrawal ends, many individuals experience PAWS or post-acute withdrawal syndrome. This often includes long-lasting depression, anxiety, sleep disturbances, irritability, fatigue, and dysphoria. These symptoms can linger for weeks or months after the individual has stopped abusing Bicodone and gone through acute withdrawal.

Bicodone withdrawal is not considered one of the most dangerous withdrawal syndromes, but there are many dangers associated with this drug and its dependence. It is important to be aware of these issues, especially if you are struggling with Bicodone abuse.

Avoiding all these issues is extremely important. Any of the common withdrawal symptoms can be uncomfortable enough to cause an individual to return to abusing Bicodone, so one must be extremely careful when going through withdrawal.

Am I Dependent on Bicodone?

you are likely already dependent on Bicodone. If you have been abusing the drug, there is also a strong chance you are addicted as well. Abusing this drug—or even taking it as prescribed for a long enough time—can easily lead to dependence, and unfortunately, without the proper treatment, you can experience intense, even dangerous side effects.

Should I Go through Bicodone Withdrawal at Home?

Bicodone detox starts with an assessment of the severity of your symptoms, usually with a scale called the Clinical Opiate Withdrawal Scale or COWS. Afterward, your medical staff will provide you with treatment options that will suit your needs.

Most individuals require medication during Bicodone detox, usually either buprenorphine or methadone.

Many patients also start behavioral therapy of some kind in order to help them cope with their withdrawal symptoms and prepare for rehab.

Not everyone going through opioid detox will require inpatient care, and some may feel comfortable in an outpatient program, especially if they have a job and a strong social network of friends and family members who can support them during treatment.

After detox, patients require rehab treatment for addiction. This is because detox itself does not treat addiction, only dependence. Individuals who do not seek rehab often relapse after detox, so it is extremely important you find a rehab program that suits your needs. The staff at your detox facility will likely assist you with this, and after rehab has ended, you may choose an aftercare program to round out your treatment.