Opiate addiction is a wide spread and serious problem affecting millions of people in America alone. Although heroin is the most well-known abused opiate, according to the World Health Organization, as of 2010, the number of people addicted to prescription opiates such as Vicodin and Oxycontin in the United States has reached an estimated 2 million people and counting. There are many different treatment options available for opiate detox, and once an addict is ready for treatment there are medications available to treat their addiction. Although some critics say that prescribing another drug to treat a drug addiction is only replacing one with another, there has been much success in using these methods to treat addiction. Of course this is only true if the addict is monitored closely by a medical professional, has a good support system, and is truly ready to be free from their addiction.

Contact Detox.com now to find opiate detox centers near you!

The following is a list of medications commonly used in detox rehabilitation centers to treat opiate addiction: 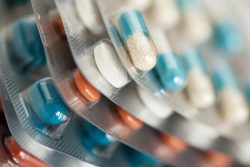 Medications help to alleviate withdrawal symptoms and reduce the risk of relapse in opiate detox.

After WWII heroin use started to rise in the US, and over the next decade or so became a serious epidemic, not only with incidents of overdose but also the spread of disease amongst users. Researchers at the Rockefeller Foundation in the 1960’s developed a system of dosing heroin addicts with methadone to prevent their use of heroin. It is a Synthetic Analgesic with long lasting effects, where one dose will last the patient all day. It is only administered under close medical supervision, and usually only at a clinic or pharmacy daily, as to prevent abuse of the drug. It eases the withdrawal symptoms for the addict without the “high.” Methadone is the most commonly used medication to treat opioid addiction.

Also known as buprenorphine, this drug was approved by the FDA in 2002 and is a partial agonist, and it works by binding to receptors in the brain and nervous system to help prevent withdrawal symptoms. It is a sublingual tablet and dissolves under the tongue.

Suboxone is also a buprenorphine-based drug like Subutex and works similarly, but also contains naloxone. Naloxone is a special narcotic that actually reverses the effects of other narcotics and helps to prevent overdoses. Suboxone comes as a sublingual tablet as well as in a dissolving strip.

Naltrexone belongs to the class of drugs known as opiate antagonists. It works in the brain to prevent opiate effects such as feelings of well-being, euphoria and pain relief. It also decreases the desire to continue take opiates.

Are you ready to begin opiate detox? Call 800-483-2193(Who Answers?) now to speak with a treatment specialist about your options.