Roughly 50% of all state and federal prisoners suffer from a substance use disorder. However, drug and alcohol treatment programs in prisons are few and far between — meaning inmates who don’t receive treatment often face a higher risk for repeat offenses and death following their release. Evidence suggests that expanding access to drug addiction treatment in prison can actually reduce drug-related incarceration rates in the U.S., and help addicted inmates become healthier, well-adjusted individuals. How does jail help addicts recover from addiction, and what can be done to improve recovery outcomes among U.S. inmates? Here’s a closer look at drug and alcohol treatment programs in prisons, and what you can do to help a former inmate recover from addiction. 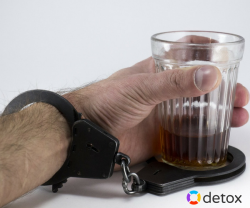 One in six male inmates have an alcohol use disorder.

Half of all U.S. inmates struggle with drug and/or alcohol addiction. Alcohol addiction affects roughly 24% of U.S. inmates, with one in six men and one in 10 women meeting criteria for alcohol use disorder at the time of entry into prison. In comparison, U.S. community rates of alcohol use disorder are 8.7% for men and 4.6% for women. A 2002 study found that roughly 35% of all male inmates and 31% of female inmates reported they had been under the influence of alcohol at the time they committed their offenses.

The rate of drug use disorders among U.S. inmates is just as high as that for alcohol use disorder, and may be slightly higher among female prisoners. Evidence suggests that 51% of prisoners with drug use disorders are female. In comparison, U.S. community rates of drug use disorders are 3.4% for men and 1.9% for women. Roughly 70% of all U.S. inmates have committed a drug-related offense, and/or are reported to have used drugs regularly prior to their arrest. An estimated 35% of inmates are under the influence of drugs at the time of their arrest. Within the first two weeks of release from prison, a former inmate’s risk for death becomes 12 times greater than that for the general population, with drug overdose being the leading cause of death.

The Lack of Drug Addiction Treatment in Prison

Between 80 and 85% of inmates who could benefit from drug addiction treatment end up receiving no treatment at all. Inmates who do receive treatment for their substance use disorders may only receive drug education or behavioral treatment, which are the most commonly used methods for treating drug and alcohol addiction in the U.S. criminal justice system. Over 25% of state prisoners and one in five federal prisoners who suffer from addiction participate in 12-step programs like Alcoholics Anonymous while in prison, but this therapy alone isn’t always enough to help inmates overcome their substance use disorders in full.

Inmates who suffer from substance use disorders and who fail to receive drug addiction treatment in prison face a high risk for relapse and death within two weeks following their release. A study examining overdose death rates among former prisoners in Washington State found that mortality rates were 12 times higher among this population for the first two weeks compared to that of the general population. Accidental drug overdoses make up roughly 25% of deaths post-release, and are mostly caused by cocaine, opioids, alcohol, and psychostimulants.

During incarceration, addicted inmates lose tolerance for alcohol and any drugs they were using, which means their bodies may only need small doses of these substances to experience the effects. After being released from prison, those still struggling with drug dependence and addiction may suffer an unintentional overdose after returning to using the same doses they were using prior to being incarcerated. Evidence also suggests that some former inmates may overdose on drugs intentionally to escape certain situational and environmental stressors, such as those related to transitioning back to life within the community. Suicide is found to be the fourth leading cause of death among former inmates within the first two weeks of release, and likely includes intentional overdoses.

Which Treatments do Addicted Inmates Need?

Addicted inmates need the same treatments as everyone else in order to fully conquer and overcome addiction. Detoxification, therapy, and aftercare are vital components of any successful addiction treatment program. Even when jails and prisons do provide drug addiction treatment, the continuation of treatment in the form of aftercare and extended care programs following incarceration can help former inmates stay clean and healthy. Untreated drug use disorders among inmates can lead to a return in criminal activity, reincarceration, and risky, impulsive behavior that can lead to the spreading of serious diseases like hepatitis and HIV.

Call Detox.com now to find addiction recovery programs for yourself or a loved one.

How Many Addicted Inmates Return to Jail?

Many inmates who struggle with addiction start using drugs again shortly after their release. Former inmates who don’t suffer fatal drug overdoses often end up being arrested once again for drug-related crimes. Evidence suggests that between 60 and 80% of former inmates with substance use disorders will commit another crime after being released from prison. An estimated 25% of inmates released from prison become reincarcerated within three years for various technical violations that include testing positive for drug use.

Former inmates with substance use disorders have reported that many halfway houses, homeless shelters, and similar types of environments offer high levels of exposure to drugs, alcohol, and drug trafficking. Environmental exposure to these factors make it difficult for former inmates to stay sober, overcome addiction, and avoid committing new drug-related crimes to fuel their addiction. A group of former inmates with substance use disorders who were interviewed following their release from prison cited exposure to drugs as the top challenge they faced in regards to staying sober. Many of these former inmates reported they lacked skills that would otherwise help them overcome relapse triggers, and avoid situations involving drugs and alcohol.

Some former inmates who suffer from addiction decide to abscond on purpose shortly after release just so they can go back into prison. Former inmates with drug use disorders have reported they often lack housing, financial security, and social support after release from prison — all of which are environmental factors that can drive the risk for drug abuse, crime, relapse, and death. Many former inmates who struggled with addiction prior to incarceration and who purposely abscond may do so to avoid exposure to environments where they might relapse. For instance, former inmates who were once dependent on heroin and who are released to halfway houses in communities where heroin is readily available may abscond to avoid relapse, and to prevent themselves from having to experience heroin withdrawal.

How the Issue is Being Addressed

Drug and alcohol treatment programs in prisons that use therapy and counseling are between 1.4 and 1.5 times more likely to reduce reoffending rates among former inmates after their release. Inmates who receive prison-based drug addiction treatment and then participate in community-based programs following their release are seven times more likely to stay sober, and three times less likely to be arrested for criminal behavior than former inmates who did not receive jail-based treatment. But does jail help addicts truly overcome addiction in full?

Drug education is the most common service offered to inmates who suffer from drug dependence and addiction. However, drug education isn’t a substitute for detox and therapies that effectively treat addiction as a whole. Many correctional facilities do have access to addiction treatment services, yet only a small percentage of these facilities use those services to help their inmates overcome addiction.

In 2016, Rhode Island started offering medication-assisted treatment to prison inmates suffering from opioid use disorder. The majority of inmates chose either buprenorphine or methadone to treat opioid dependence, though naltrexone was also available. After six months, the treatment program produced a 61% decrease in drug overdose deaths following incarceration.

Treatment providers that work with U.S. criminal justice systems are urged to adhere to the Principles of Drug Abuse Treatment for Criminal Justice Populations, published by the NIDA.

Summarized, these principles are:

What Else Can We Do?

What else can be done to improve recovery outcomes and reduce drug-related incarceration rates in the U.S.? First, those in police custody should be screened for drug use disorders and treated for withdrawal. Second, the criminal justice system must facilitate MAT and other treatments for inmates upon arrival to prison. Next, inmates who suffer from addiction must be connected with community-based treatment programs and continuing care following release. Court-ordered rehab may also be an option for offenders who have committed nonviolent drug-related crimes. These strategies may help prevent relapse, reduce the risk for overdose death, and reduce recidivism rates.

If you or a loved one has recently been released from prison, understand that drug addiction treatment can help you or your loved one lower the risk for relapse and reincarceration. Use our drug detox center directory to find an addiction treatment center near you, or call our 24/7 confidential helpline at 800-483-2193(Who Answers?) to speak with a drug abuse counselor who can discuss all your available treatment options.