Benefits of Detoxing from Marijuana with Medical Support

Marijuana is a controversial topic that has been on the news lately. Even though there has been a significant push to legalize marijuana, particularly for medical use, it remains a Schedule I drug under the Controlled Substances Act of 1975. This means that the federal government considers it to have no medicinal value, and no purpose in research. This opinion is gradually changing but it does not change the fact that many heavy users still report symptoms of withdrawal. Perhaps the best answer for these sufferers is detoxing from marijuana.

Additionally, according to the National Institute on Drug Abuse, addiction treatment with medical support is far more successful, and dramatically reduces the rate of relapse. When considering the options it is important to understand marijuana addiction, its timeline, its symptoms, and the medications available to help with the detox procedures.

Call Detox.com now to find marijuana recovery centers near you!

Many proponents of marijuana are fond of saying that marijuana is not dangerous, because it is not addictive. This is not true. Though not as destructively addictive as heroin or crack cocaine, marijuana is, nonetheless, addictive. Marijuana addiction is almost as prevalent as alcohol addiction. Most people who are addicted are not knowingly so.

Although many people will attempt to say differently, marijuana withdrawal is a very real thing. According to the CNS Drugs article, “Pharmacotherapy for Cannabis Dependence: How Close are We?” the psychological symptoms of marijuana addiction are: 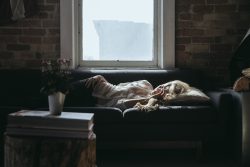 Insomnia is common during marijuana withdrawal.

These symptoms are not the only ones. Despite protestations that there are no physical withdrawal symptoms, most patients suffer from:

Although some people claim these symptoms are psycho somatic, many say they are actual physical symptoms of withdrawal.

The marijuana withdrawal timeline depends on a variety of factors. These factors are:

Depending on the frequency of use, withdrawal starts a few hours after the last time you used it. The cravings are usually relatively intense at first. Acute withdrawal usually lasts between 24 and 72 hours, although it can last longer with heavier use. If you are experiencing physical symptoms they normally last around the same amount of time or less.

The more intense psychological symptoms such as mood swings and aggression usually peak between three and four days after last use. These symptoms often last for between seven and ten days. Many of the symptoms can last longer before gradually tapering off. These symptoms will subside.

For particularly heavy users there is a danger of post acute withdrawal. This is a pattern of intense cravings, irritability, mood swings, and other psychological symptoms that appear on and off throughout the next few months. These episodes will gradually become less frequent as time goes on.

According to Current Pharmaceutical Design, doctors are currently experimenting with several medications to ease withdrawal. They have had some success. These medications are:

They have the most success with dronabinol. This drug closely resembles the effects of marijuana and proves promising for helping patients get over marijuana addiction much the same way that Suboxone helps with opiate withdrawal. The dosage of dronabinol is then reduced to achieve complete sobriety. This treatment is still in its infancy and only time will tell whether or not it is safe and effective.

Many people agree that medical detox is the way to stop using marijuana if you are a long term addict. You do not have to suffer through withdrawal alone. We can help, call 800-483-2193(Who Answers?) for more information about detoxing from marijuana with medical support.