How to Cope with Morphine Withdrawal Symptoms During Detox

Morphine addictions take an incredible toll on the body making it all the more difficult to stop using. Knowing how to cope with morphine withdrawal symptoms can mean the difference between a successful detox and resuming drug use.

While detoxing at a drug treatment facility offers the best chance of overcoming morphine withdrawal symptoms, there are still ways to reduce the severity of symptoms when detoxing on your own.

Contact us for more advice and resources concerning morphine withdrawal and treatment options. 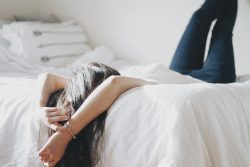 Much of the discomfort that occurs during detox stems from morphine’s damaging effects on neurotransmitter processes in the brain. With each dose of morphine, brain cell receptors develop a higher tolerance for the drug. At the same time, brain functions become increasingly dependent on the drug’s effects. These effects account for how a person can experience morphine withdrawal symptoms while still using the drug.

These effects also work against the detox process, as brain functions and brain structures have grown weak from ongoing morphine use. During detox, the brain has to work twice as hard to make up for its dependency on morphine effects. As a result, morphine withdrawal symptoms come on fast and strong within the first few days of detox. By reducing the severity of the symptoms experienced, a person can better cope with the detox process.

While everyone experiences withdrawal differently, certain symptoms are likely to develop during the detox process, some of which include:

Getting some form of exercise, be it walking, doing housework or calisthenics, can help reduce the degree of restlessness, irritability and depression a person experiences during detox. In effect, these symptoms result from the brain’s inability to regulate the body’s endorphin levels. Since endorphins work as the body’s own natural pain relievers, low endorphin levels leave the body in a hypersensitive state.

Here are a few other approaches to consider for coping with morphine withdrawal symptoms:

Over-the-counter analgesics, such as naproxen, ibuprofen and acetaminophen do a good job at relieving the aches and pains that develop during detox.

For people who rely on morphine as a pain reliever, aches and pains will be considerably worse during detox. Since ibuprofen and naproxen are both nonsteroidal, anti-inflammatory drugs, taking both at the same time can provide some relief from pain symptoms.

Insomnia symptoms persist throughout much of the detox period. Not getting proper rest can make the other withdrawal symptoms that much worse.

Eliminating caffeinated and sugar-based foods can help the brain settle into a sleep cycle. Daily exercise can also help burn off excess energy making it easier to relax and fall asleep at nighttime.

Probably the worst of all the morphine withdrawal symptoms is the ongoing depression that develops during detox and lasts for months after.

As isolation can quickly fan the flames of depression, getting out of the house as often as possible can help reduce feelings of depression during detox. Attending support group meetings, such as Narcotics Anonymous can provide the added support and guidance needed to get past the rough periods both during and after detox.

Seeking professional care is the best way to cope with morphine withdrawal. Search our directory of detox centers, or call our helpline at 800-483-2193(Who Answers?) to speak with a treatment specialist today!