Experts Find Women are at a Higher Risk of Cocaine Addiction

As mothers and caregivers who play multiple roles in their communities, women tend to suffer higher rates of anxiety and depression than men. Women are often in charge of raising children and running households, and are expected to manage their careers in addition to these important responsibilities. Sometimes, when anxiety and depression become chronic, painful, and unbearable, women turn to drugs and alcohol to relieve their symptoms.

Statistics show that adult men are between two and three times more likely to suffer from drug addiction than women. But when it comes to cocaine use specifically, evidence shows that women are at a higher risk for addiction. Women become addicted to cocaine at a faster rate than men, and face a higher number of challenges with quitting due to the way their bodies and brains enhance the drug’s effects.

Here’s an in-depth look at how cocaine affects the female body, and how a women’s detox center can effectively help females of all ages safely and comfortably overcome cocaine addiction. 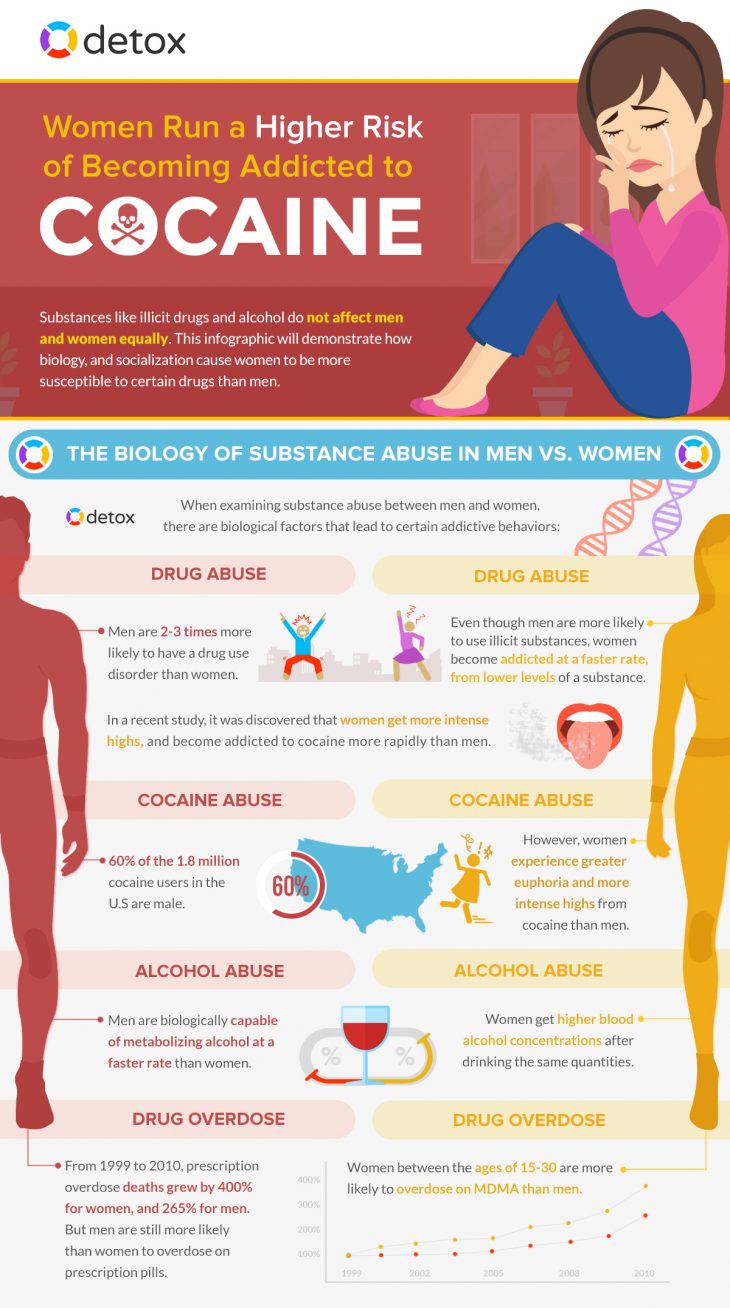 The Science Behind Cocaine Addiction in Women

Of the 1.8 million cocaine users in the U.S., roughly 39.5 percent are female. Women are reported to experience greater euphoria and more intense highs from cocaine than men, which is partly why women become addicted to the drug more quickly. According to scientists, estrogen is the main driving factor behind cocaine use disorders in women.

In women, estrogen activates two receptors known as CB1R and mGluR5. When women use cocaine, these receptors heighten the drug’s effects to produce greater euphoria. CB1R and mGluR5 can only be coupled with estrogen in women, and not in men. Therefore, women who use cocaine and other stimulants will typically experience more intense effects from these drugs than those experienced by men.

Research also shows that women may be more sensitive to cocaine when using the drug during the follicular phase of the menstrual cycle. The follicular phase occurs on days one through 13 following menstruation. During the follicular phase, estrogen levels rise slowly to prepare the female body for ovulation. Women using cocaine during this phase will experience heightened feelings of euphoria, energy, desire, and cognition — all of which fuel the need for more cocaine and increase the risk for dependency and addiction.

Cocaine is a powerful, illicit stimulant that increases one’s risk for an overdose, stroke, and heart failure, among other serious health problems. Cocaine addiction in women can be successfully treated with cocaine detox, along with therapies that help them overcome addiction as a whole physically and psychologically. Women-only treatment centers that understand the unique challenges women face with overcoming addiction can help you or your female loved one successfully conquer addiction and get back to living a healthier, fulfilling life.

Contact Detox.com now to find cocaine detox and addiction treatment centers near you!

Compared to men who suffer from addiction, women tend to have more obstacles that stand in the way of their ability to seek and receive addiction treatment. For instance, many women lack the time and money needed for treatment since they’re expected to invest both into their families. Though women are less likely than men to seek cocaine addiction treatment, studies show that women who do receive treatment often fare better than men at achieving long-term sobriety.

Women are addicted to cocaine and who have young children are often at greater risk for losing custody of their kids, and for facing serious legal consequences associated with child endangerment. These factors alone can scare women into avoiding addiction treatment.

Plus, many women who suffer from cocaine addiction tend to lack responsible, trusting friends and family who can care for their children as moms recover in detox and rehab. Women without good friends or the resources to pay for childcare often neglect their own treatment needs so they can stay home and care for their kids. Fortunately, many addiction treatment facilities do offer housing and childcare for women and their families, which is helpful in situations where women need to know their children are safe and being cared for while recovering from addiction. 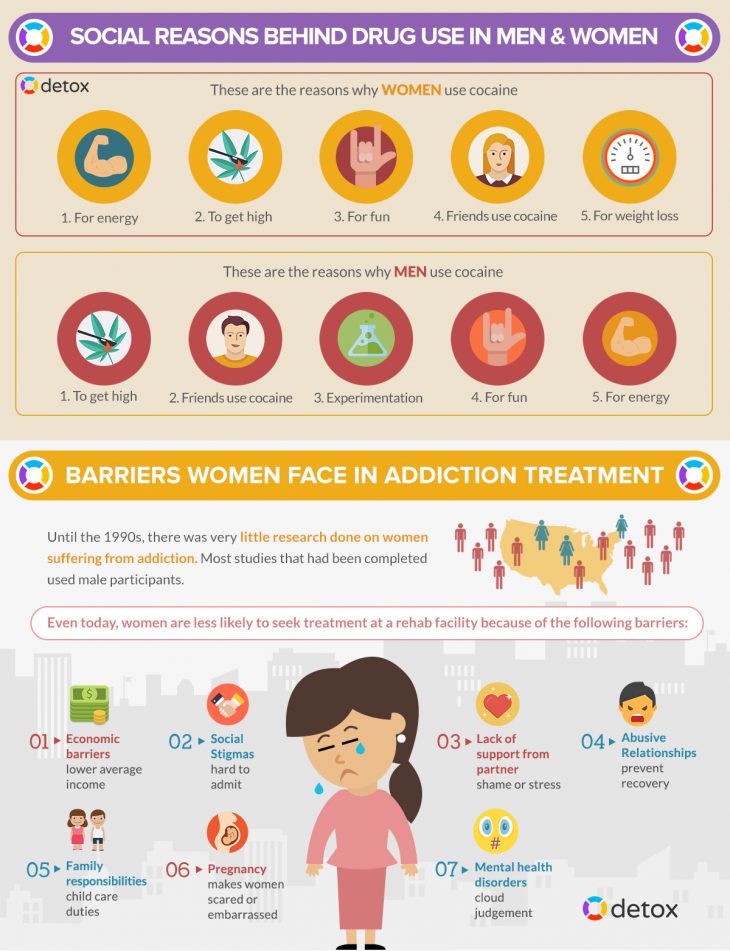 Sociocultural factors such as stigma surrounding addiction and lack of partner support are also common reasons women may avoid seeking cocaine addiction treatment. Some women may feel embarrassed about their addiction, or do not want to be viewed as weak for needing help for their addiction, while others may have partners who also struggle with addiction and do not support the female’s decision to seek treatment. Research shows that women who suffer from anxiety and depression on top of cocaine addiction are also less likely to seek addiction treatment.

Since women become addicted to cocaine for different reasons than men, many women can benefit from recovering from cocaine addiction at women-only treatment centers. Separating genders at the treatment level helps prevent distractions such as relationships and sex from interfering with recovery. Women patients suffering from co-occurring disorders such as sex addiction can also lower their risk for relapsing during treatment when separated from men.

The first stage of women-only addiction treatment is cocaine detox. Cocaine detox helps women overcome physical dependency on cocaine so they no longer experience cravings and other withdrawal symptoms associated with drug use. Following cocaine detox, women receive therapy aimed at helping them overcome psychological causes of addiction — including anxiety and depression. Other co-occurring disorders that commonly affect women who struggle with cocaine addiction are eating disorders, postpartum depression, and PTSD.

If you or someone you love is interested in women-only addiction treatment, call now to find the best program for your needs.

Does Your Loved One Need Cocaine Detox?

Sometimes it can be difficult to determine whether you or your loved one is suffering cocaine addiction. Cocaine addiction often produces physical and behavioral symptoms that develop gradually over time. Those who suffer from addiction to any substance tend to prioritize drug and alcohol use above important life responsibilities such as career, education, and family.

If you or a female loved one is exhibiting any of the above symptoms, cocaine detox may be the next big step toward becoming healthier and addiction-free. Contact a women-only treatment center that specializes in treating cocaine addiction, or use our detox center directory to find the nearest cocaine detox center in your area.

Cocaine detox could save your loved one’s life. Get them the help they need today!

Cocaine detox treatments help individuals safely and comfortably overcome physical dependency on cocaine with a lowered risk for serious health complications. Quitting cocaine on your own without professional medical treatment increases the risk for an overdose, stroke, and heart failure. This is because many individuals return to using the same amounts of cocaine they were using prior to quitting, unaware that their bodies may not be able to handle the same doses. 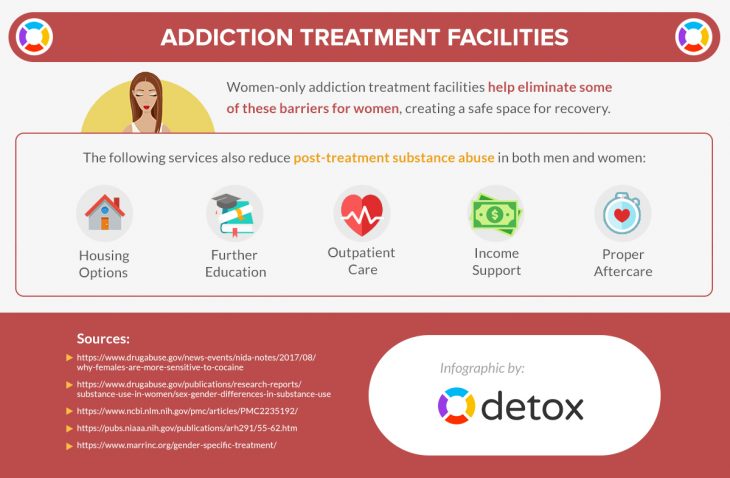 Unlike with opioid and heroin addiction, there are no treatments that effectively eliminate cocaine cravings and all other withdrawal symptoms at once. Many times, cocaine detox is conducted using medications that can minimize certain withdrawal symptoms. For instance, an anticonvulsant drug called topiramate can help reduce agitation caused by cocaine withdrawal.

A recent study found that a beta blocker known as propranolol can be effective at reducing feelings of reward associated with cocaine use, along with severe withdrawal symptoms such as anxiety and agitation. Another medication called disulfiram, which is commonly used to treat alcohol dependence, helps lower the risk for cocaine relapse by blocking the effects of cocaine on dopamine. Disulfiram isn’t always used as part of cocaine detox, but may be prescribed following detox as on ongoing relapse prevention treatment.

Cocaine accounts for roughly six percent of all admissions to addiction treatment programs in the U.S.

About 68 percent of those who seek cocaine addiction treatment use more than one drug to fuel their addiction. Cocaine detox treatments are often customized for each individual patient based on other substances they may be abusing. For example, a woman abusing opioids and cocaine may also be prescribed buprenorphine and naltrexone to curb opioid withdrawal symptoms and block the effects of illicit opioids.

What Happens After Cocaine Detox?

Cocaine addiction treatment often involves a number of behavioral therapies that address underlying core causes of addiction. Cocaine doesn’t often trigger physical withdrawal symptoms such as nausea and vomiting like alcohol and other drugs. However, withdrawing from cocaine does trigger a range of psychological symptoms including lack of pleasure, anxiety, and paranoia.

Following detox, the psychological components of cocaine addiction are treated using a combination of cognitive-behavioral therapy, individual and group counseling, and contingency-management therapy. These therapies are effective at helping women identify and overcome negative thoughts and behaviors that led to their addiction in the first place. Many cocaine detox centers also prescribe medications such as antidepressants to treat co-occurring disorders like depression and bipolar disorder.

If you or your loved one is suffering from a cocaine use disorder, understand that affordable addiction treatment is available and nearby. Call our 24/7 confidential helpline at 800-483-2193(Who Answers?) to speak with a caring addiction recovery counselor about finding a women’s detox center. We’ll help you find cocaine detox centers ready to guide you or your loved one along the path to lifelong sobriety.