After so many months or years of chronic drug abuse, the addict’s mind enters into a self-perpetuating cycle that revolves around getting and using drugs. At this point, all other areas of life take a backseat to the role drugs play in an addict’s life as they begin facing addiction and recognizing the control it has over their mind.

While the loss of control may seem blatantly obvious to friends and family, the addict has little to no awareness of the damaging effects of drug use or the steady state of decline his or her life reflects. This loss of control extends well past the addict’s external circumstances, disrupting fundamental areas of his or her psychological make-up as well as essential chemical processes in the brain.

Until a person makes the decision to get needed treatment help, the control factors that drive addictive behaviors will grow stronger, making it all the more difficult to break the hold of addiction on his or her life. 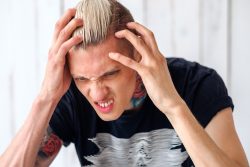 Drug abuse often stems from a lack of control over one’s emotions.

To an addict, facing addiction requires a total breakdown of entrenched belief systems brought on by the effects of chronic drug use. Equally important are the issues that place a person at risk of engaging in drug-using behaviors at the start.

According to the National Institute on Drug Abuse, a lack of control over one’s emotions and behaviors predisposes a person to drug abuse and addiction. Issues involving self-control reflect an overall lack of maturity in terms of being able to cope with the affairs of daily life in healthy ways.

Turning to drugs offers a means of escape as well as a means for replacing difficult emotions with the desirable effects of a drug. Unfortunately, these attempts to manage one’s emotions come with harmful consequences that leave a person worse off than where he or she started. Ultimately, facing addiction means dealing with the addiction itself as well as the emotional issues that drives a person to drugs.

Addiction, in general, encompasses a wide spectrum of substances, activities and behaviors that all reflect the underlying mechanisms that drive the addictive process. The various forms of addiction today include:

In effect, any substance, activity or behavior that becomes the sole focus of a person’s life falls under the category of addiction. In many ways, addiction works in the same way as an obsession that takes over a person’s life.

The addictive process relies on the physical effects of the “obsession” on the brain’s chemical processes, which in turn, mold and warp the addict’s psychological make-up. Whether it’s an activity or a substance, the compulsive behavior that takes shape during the course of an addiction reflect the addict’s attempts to control his or her quality of life.

Along with the direct effects of drugs on brain chemical processes, people most at risk of drug abuse also struggle with impulse control issues in general, according to the U. S. National Library of Medicine. People struggling with impulse control experience difficulties in four key areas:

A lack of impulse control not only paves the way for initial experimentation with drugs, but also makes it easier for addicts to overlook the negative consequences that come from drug abuse. These characteristics can develop as early as childhood.

In this light, facing addiction has more to do with a person’s base psychological make-up than the effects of the drug itself.

According to the Journal of Addictive Disorders & Their Treatment, ongoing drug use impairs the areas of the brain regulating attention, behavior control and executive cognitive functions. These effects inevitably disrupt the centers responsible for decision-making, logic and reasoning. In effect, months of chronic drug use gradually skew a person’s thinking processes, motivations and belief systems.

These changes essentially rewire a person’s psychological make-up creating belief systems supported by the ongoing effects of drugs. In turn, the addict’s sense of control over his or her drug use has no basis in sound logic and reasoning. For these reasons, facing addiction requires a complete overhaul or “reprogramming” in terms of retraining the areas of the brain warped by addiction’s effects.

Dopamine, an essential neurotransmitter chemical, plays a pivotal role in a developing addiction. Dopamine output regulates an important area of the brain known as the reward system. According to Harvard Health Publications, the gradual loss of control that takes place during the course of drug use stems from the repeated surges of dopamine in the brain.

Every time an activity or substance triggers dopamine secretions, the reward system interprets this stimulus as essential to a person’s survival. With continued drug use, rising and falling dopamine levels set the stage for psychological dependency to develop.

Facing addiction starts with overcoming the physical effects of the drug over a person’s thinking and behaviors. These effects gradually worsen as the brain loses its ability to regulate the chemical activities that support normal bodily functioning.

The brain’s loss of control over drug effects becomes increasingly apparent, taking the form of:

Control factors take various forms throughout the course of a developing addiction. One thing’s for sure though: the longer a person keeps using drugs the more out-of-control his or her life becomes.

Facing addiction starts with stopping drug use since the physical effects of drugs keep the addiction cycle in motion. Dealing with addiction per se requires ongoing treatment past the detox stage; otherwise, the psychological aftereffects of addiction will pull a person right back into addiction’s web.

For help finding a detox center or addiction treatment program, search our directory or call 800-483-2193(Who Answers?) to speak with a specialist.