A drug that failed to treat osteoarthritis as intended may be more useful at treating opioid dependence, according to a new study. The experimental drug, which remains unnamed, was found ineffective at treating osteoarthritis during previous clinical trials, but when combined with opioids like morphine, can treat pain without causing opioid tolerance. This new pain treatment could soon join the arsenal of non-addictive pain treatments being developed to reduce the number of opioid overdose deaths in the U.S., which totalled more than 53,000 in 2016. 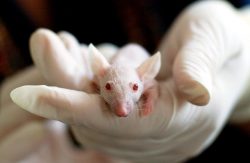 After the experimental drug was proven safe to use in people but ineffective at treating osteoarthritis, scientists at Indiana University looked for other ways the drug could be used to treat pain. Results from the IU study, which was published in the latest issue of Molecular Pharmacology, suggest that combining the experimental drug with an opioid can allow patients to experience pain relief while preventing opioid tolerance. A person becomes tolerant to drugs like opioids when their bodies require higher amounts of the drug to experience its effects.

To test the effects of the experimental drug when combined with opioids, IU scientists injected a small dose of the test drug with morphine into mice suffering from neuropathic pain. They discovered that the mice did not become tolerant to the morphine, and continued to lack tolerance even after discontinuing morphine therapy. The test drug was also found effective at reducing pain on its own when used at higher doses.

People who use opioids can quickly develop a tolerance to these drugs due to the way they trigger euphoria and alter levels of brain neurotransmitters linked to feelings of reward. Opioids are usually only intended for short-term use due to the way they can lead to tolerance and physical dependence. But using opioids long-term, or in ways other than directed can cause people to become tolerant, and use higher doses in an effort to experience euphoria and pain relief.

Unfortunately, people who become tolerant to opioids are at higher risk for addiction and overdose — the latter of which can happen when high doses of opioids lead to respiratory depression and coma.

Other ways to prevent opioid tolerance:

If you’ve become dependent on painkillers or heroin, understand that getting help now is your best option for avoiding an overdose, and preventing your opioid use from becoming a full-blown addiction. There are many safe, effective ways to overcome opioid dependence, including a medical detox, medically assisted detox, and medication-assisted treatment. All three detox treatments allow you to safely withdraw from opioids under close medical supervision so you face a lower risk for overdose, relapse, and other complications.

Opioid dependence is commonly treated using methadone, buprenorphine, and naltrexone, which are medications that relieve opioid withdrawal symptoms, block the effects of opioids, and reduce drug cravings. These medications allow you to recover from opioid dependence with less pain and discomfort so you can experience a safe, successful recovery.

Call our 24/7 confidential helpline at 800-483-2193(Who Answers?) to learn more about your options for recovering from opioid addiction. We’ll discuss all your available treatments, and help you find the nearest drug detox center devoted to helping you become healthier and sober for life.