Ohio law enforcement is warning neighboring states about dangerous batches of heroin being laced with substances found to eat away skin and cause instant drug overdoses. The origination of these substances, known as Rizzy and bromadol, remains unknown at this time, but police are also warning drug users about the risks of using heroin laced with unknown substances. The number of heroin-related deaths in the U.S. more than quadrupled between 2002 and 2013, and continues to rise as the country struggles to overcome its opioid epidemic.

What are Bromadol and Rizzy? 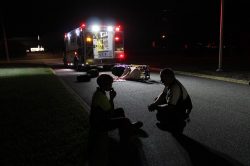 Heroin laced with bromadol can cause an instant overdose.

Bromadol, also known as BDPC, is a synthetic opioid between 30 and 10,000 times stronger than morphine, depending on the formulation. The potency of bromadol can be compared to another synthetic opioid called carfentanil — a powerful elephant tranquilizer also found to be up to 10,000 times stronger than morphine. Up to now, bromadol has not been detected in heroin batches in the U.S., though reports show Canada police seized batches of the drug in 2013.

Rizzy is a chemical dye used to enhance the color of rose petals and flower arrangements, and is said to be available online at a low cost. But florists interviewed by Ohio police say they have never heard about or used Rizzy for their businesses.

Heroin mixed or cut with bromadol can stop a person’s breathing and cause an instant overdose — increasing the risk for coma and death. Rizzy, on the other hand, has a toxic effect that can cause skin necrosis, and lead to rotting, peeling skin. A 25-year-old Ohio man who was arrested for using heroin had admitted to injecting heroin mixed with Rizzy before his flesh started peeling away.

The Dangers of Using Laced Heroin

Heroin is one of the most addictive illicit drugs easily accessible to Americans, and caused more than 15,000 overdose deaths in 2016. In recent years, heroin dealers have started mixing and cutting their supplies with substitutes that are far cheaper, and much more deadly.

Fentanyl — a synthetic opioid up to 50 times stronger than heroin — is currently driving heroin overdose rates across the U.S., and was linked to more than 20,000 deaths in 2016. Using heroin that has been laced with substances like fentanyl, carfentanil, and bromadol can significantly increase your risk for an overdose due to the latter drugs’ potency levels. A heroin user with a certain tolerance level can accidentally use too high a dose and instantly lose consciousness.

Aside from other opioids, heroin mixed with substances like Rizzy can produce adverse effects that increase your risk for serious health problems, including death. Many of these synthetic products are not meant for human ingestion, and can produce unknown and unpredictable side effects.

How to Get Help for Heroin Addiction

Heroin addiction can be deadly and difficult to fight on your own without professional help. The safest way to overcome heroin addiction is to receive heroin detox at an opioid drug detox center. An opioid detox center can guide you through heroin withdrawal with fewer risks and complications, and may even prescribe medications that relieve all your withdrawal symptoms — including drug cravings.

If you or your loved one needs help fighting opioid addiction, call our 24/7 confidential helpline at 800-483-2193(Who Answers?). Our understanding addiction specialists will discuss all your treatment options, and connect you with the nearest drug detox center ready to help you achieve improved health and sobriety.