Scientists recently developed a new drug that can be used in addiction treatment to reduce cravings for substances like cocaine, methamphetamine, and alcohol. The drug, which is yet unnamed, is said to be an improved version of vigabatrin — an anti-epilepsy medication that has been used to treat substance use disorders in the past. If approved by the FDA, the new medicine may be able to successfully fight addiction, as well as epilepsy and related conditions.

How Will the New Drug Treat Addiction? 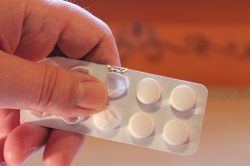 The new medication reduces drug and alcohol cravings by blocking an enzyme that breaks down GABA — a neurotransmitter that helps regulate brain function. People who abuse drugs like cocaine and alcohol generally have less inhibitory GABA in their brains, which is why medications that increase GABA levels are commonly used in addiction treatment. But the new drug will prevent GABA from breaking down and reducing a person’s dopamine levels — the latter of which is a neurotransmitter that drives cravings and feelings of reward in drug users.

The new anti-addiction drug is similar to vigabatrin, but has a different compound that makes it 10 times more efficient than vigabatrin for treating drug dependence. Early scientific trials for the drug outlined in the latest issue of the Journal of the American Chemical Society show that when compared to vigabatrin, the drug is less likely to cause adverse side effects, and is better at preventing the release of dopamine when people use cocaine and nicotine.

The latest anti-addiction medication is an improved version of the anticonvulsant drug vigabatrin, which is primarily used to treat epilepsy and other seizure disorders. Vigabatrin works by boosting GABA levels in the brain to prevent seizures, but can also reduce cravings for drugs and alcohol — especially stimulants like cocaine, meth, and nicotine.

Studies show that vigabatrin is effective at eliminating cocaine addiction in up to 28% of those diagnosed with cocaine use disorder. But at the same time, long-term vigabatrin therapy has been linked to serious side effects such as vision impairment and eye damage in up to 40% of users. Vigabatrin is also found to cause suicidal thoughts in roughly one in every 500 patients.

Other risks of using vigabatrin to treat addiction:

Detox is always the first stage of addiction treatment, and helps you overcome physical dependence on drugs and alcohol. Many of today’s detox treatments involve the use of FDA-approved medications that can safely relieve cravings, nausea, and other withdrawal symptoms — such as methadone for opioid addiction. But at this time, there are no drugs used in addiction treatment that can reduce cravings for stimulants like cocaine without posing the risk for serious side effects.

If you need help recovering from cocaine and meth addiction, look for drug detox centers that offer a medically supervised detox or a medical detox. Both detox methods allow you to withdraw from drugs under close medical supervision so you can recover with a lowered risk for side effects. Some medications may be used to treat specific withdrawal symptoms like insomnia so you can recover more comfortably.

A medical detox is also one of the safest detox treatments for alcohol addiction, since heavy, long-term users may be at risk for a severe form of withdrawal called delirium tremens that can lead to seizures and death. Medications like disulfiram may also be used in alcohol addiction treatment to prevent relapse by causing adverse reactions when used with alcohol.

Do you need help finding safe, affordable treatment for addiction? Call our 24/7 confidential helpline at 800-483-2193(Who Answers?) to speak with an addiction counselor about nearby detox centers ready to help you achieve improved health and lifelong sobriety from drugs and alcohol.