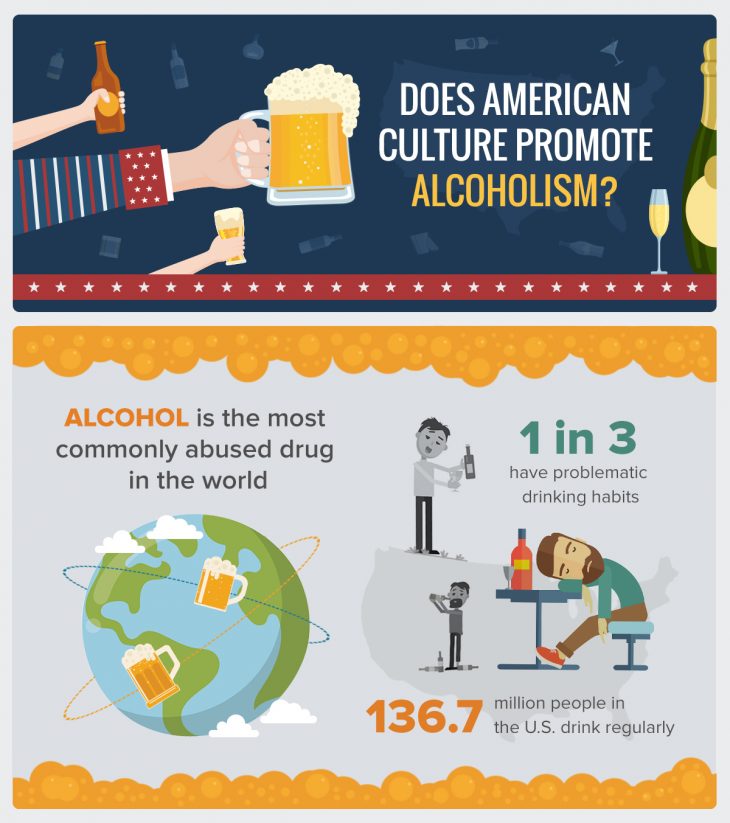 Alcohol is regularly consumed by 136.7 million people in the U.S., with one in three adults qualifying as excessive drinkers. Alcohol is the most socially promoted drug of choice in America — yet, excessive alcohol consumption costs the country roughly 88,000 deaths per year and more than $249 billion in lost wages, hospitalization, incarceration, and related expenses.

It’s not surprising that drinking alcohol is strongly embedded into the American culture, since alcohol consumption is often considered a rite of passage into adulthood, and included in celebrations like graduations, weddings, and birthdays. Alcohol consumption is even heavily promoted by movies, music, advertising campaigns, and social media platforms commonly used by children and teens.

Although drinking alcohol regularly may be the societal norm among most Americans, excessive alcohol consumption is risky and unsafe and can cause problems among individuals, families, communities, and future generations. Excessive alcohol consumption also causes serious problems with a drinker’s health and increases the risk for liver disease, heart disease, and cancer, as well as physical dependence and addiction.

Here’s a closer look at the history of alcohol in America, along with facts surrounding the dangers of problematic drinking and how to help an alcoholic stay sober in a country that strongly promotes the act of drinking.

A Brief History of Alcohol in America

Alcohol is consumed by nearly every country in the world, and is linked to roughly 4% of all deaths worldwide. This is greater than the number of worldwide deaths caused by violence, tuberculosis, HIV, and AIDS. But alcohol consumption didn’t become problematic in the U.S. until after Prohibition — a constitutional policy that lasted from 1920 to 1933 and was designed to reduce drinking by preventing businesses from manufacturing, distributing, and selling alcohol.

Prohibition was enacted mainly by activists who felt that alcohol consumption led to political correction, violence, and alcohol addiction. Many leaders of the Prohibition movement were concerned about growing rates of alcohol abuse among Americans being influenced by the cultural backgrounds of European immigrants. Countries in Western and Eastern Europe have always consumed higher amounts of alcohol than most other countries, with Belarus topping the charts at 17.5 liters of alcohol being consumed by each resident every year.

Shortly after alcohol was banned, rates of nationwide alcohol consumption decreased by 30%. Researchers found that rates of intoxication, alcohol addiction, cirrhosis, and psychosis also decreased during the early years of Prohibition by between 50% and 70%. But as years passed, rates of alcohol consumption gradually started to rise on behalf of factors such as increased demand for a product that was now illegal, and advancements in women’s rights that led to a higher number of women drinking alcohol.

Researchers say that although Prohibition was effective for a short while at reducing nationwide alcohol consumption, the movement failed to deter newer generations from alcohol — particularly the Lost Generation, which was the generation reaching maturity during and shortly after World War I. Those who had grown up having restricted access to alcohol began idealizing and glorifying the act of drinking through music, movies, novels, and other forms of printed media, which eventually helped reshape the country’s negative views toward alcohol. The increased presence of women in saloons also helped normalize the act of drinking in America.

By the 1950s, alcohol consumption had risen to roughly two gallons per capita, and rose again to 2.4 gallons per capita during the 1960s. Alcohol consumption levels didn’t rise past pre-Prohibition levels until the early 1970s. By the end of the 1990s, two-thirds of alcohol in the U.S. was consumed at home or at private parties. The legal drinking age also fluctuated over the years, with some states allowing residents as young as 18 years old to legally consume alcohol. In 1984, the majority of states changed the legal drinking age to 21, which is still in effect in most parts of the U.S. today.

How Alcohol Consumption is Promoted in America

If you pay close attention, you’ll realize that alcohol is promoted nearly everywhere in America. Billboards, television and radio ads, magazines, novels, and music all play roles in supporting alcohol consumption. A number of films even feature drinking and alcohol consumption as the main plot point — including the Hangover movies, Superbad, and Neighbors — all of which have indirectly inspired excessive drinking among the general population. During the first quarter of 2016, the alcohol industry spent $421 million on advertising, with 89% of those dollars being used for television ads. This was a 26% increase in spending from 2015.

Alcohol is also often made available at most social events attended by adults over the age of 21. Alcohol is commonly served at weddings, sporting events, and concerts, as well as at many work-related functions and after-hours events. It is even available at many grocery stores and restaurants across the U.S. to provide Americans with greater access to alcohol. 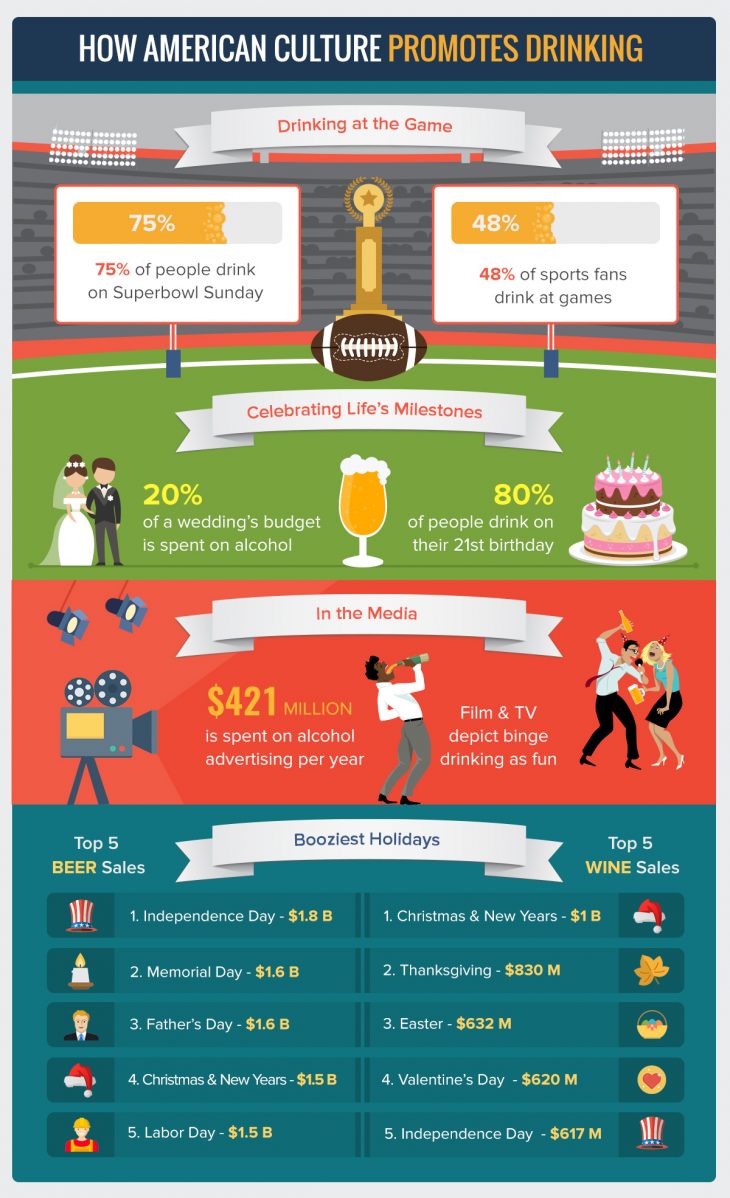 When sweetened, fruity, alcoholic beverages entered the market during the 1980s, alcohol advertising became more strongly targeted at women and younger adults. Though most companies in the alcohol industry insist all their marketing campaigns are directed at adults between the ages of 21 and 29, many younger adults and youth below the legal drinking age are being drawn to alcohol on behalf of engaging forms of advertising.

In fact, companies in the alcohol industry gear many of their advertising campaigns toward youth with hopes of influencing their future drinking preferences. A recent study examined the effects of alcohol advertising on youth who watched television shows featuring alcohol ads for certain brands. It was found that the alcohol brands that ran ads during the shows were linked to four times higher the amount of alcohol consumption than brands that did not advertise during those same shows. Another study found that 15% of middle school students provided with alcohol-branded merchandise like t-shirts and toys had started drinking alcohol within one to two years of receiving the items.

Why Alcohol Consumption Became a “Rite of Passage” For Most People

Alcohol is the most commonly used and abused substance among U.S. youth. Underage drinkers between the ages of 12 and 20 consume a higher number of alcoholic beverages per drinking occasion than adults, and drink 11% of all alcohol consumed in the U.S.

Alcohol consumption is commonly viewed as a “rite of passage” for many young adults between the ages of 18 and 25 as they transition into adulthood — especially for those who go to college. College students actually have higher rates of binge drinking and DUIs than others in their same age group who don’t go to college. At college, students are often unsupervised, have limited interactions with parents and other adults, and can often gain easy access to alcohol from other students who are over the age of 21. Kids who face high levels of academic pressure also frequently turn to alcohol as a way to cope with stress or to wind down after intense study sessions.

What’s more concerning is that 90% of alcohol consumed by underage drinkers is in the form of binge drinks. Binge drinking is the act of drinking an excessive amount of alcohol within a short period of time to achieve intoxication and is considered the most deadly way to consume alcohol. Binge drinking often leads to problems involving auto accidents, alcohol poisoning, violence, and assault, and can cause serious health problems including stroke, heart disease, sexually transmitted diseases, and addiction. Alcohol-related injuries caused by binge drinking kills roughly 1,825 college students every year.

College drinking aside, many young adults experience a wide range of lifestyle changes that pave the way for drinking as they make their way into adulthood. Changes in residence, employment, education, and romantic relationships often lead to an increased number of choices and opportunities, and to an exploratory mindset that involves trying alcohol and other substances. Studies show that some young adults choose to engage in problematic drinking since their lifestyles are no being constrained by teachers, parents, and guardians.

The Problem with Alcohol Consumption Rates in America

Of the 136.7 million Americans who drink alcohol regularly, 65.3 million report binge drinking, and 16.3 million people report heavy alcohol use within the last month. But because alcohol consumption has been normalized in the U.S. since the time of Prohibition, very few Americans with legitimate drinking problems are able to recognize they have a problem in the first place — leaving a huge treatment gap. One in seven Americans will develop a substance use disorder at some point in their lives, but only one in 10 will receive treatment.

Additionally, many Americans who consider themselves “moderate drinkers” are found to consume far more than the defined moderate amount, and are largely unaware that their drinking behavior is problematic.

The Struggles of the Recovering Alcoholic in an Alcoholic Induced America

Overcoming a substance use disorder can be challenging enough without being exposed to drugs and alcohol. But while people recovering from addiction to illicit substances like heroin, meth, and cocaine can change their lifestyles accordingly to avoid people, places, and situations that enable drug use, those recovering from alcohol addiction must often work harder at managing and avoiding their triggers. That’s because alcohol is everywhere and easily accessible in most communities across the U.S.

Given the history of alcohol in America, and the fact that alcohol is consumed at most social events and parties, recovering alcoholics often require extensive counseling and therapy that teach them how to stay sober and mingle alongside peers who don’t have a history of alcohol abuse. Anytime a recovering alcoholic visits a restaurant or other establishment serving alcohol, they must work harder at keeping cravings and tendencies in check to avoid an alcohol relapse. Those recovering from heroin or meth addiction may fare better in these situations since illicit drugs are not readily available, while those recovering from alcohol addiction must frequently and more heavily rely on skills to avoid relapse. Even watching alcohol commercials on television can trigger one’s urge to drink alcohol. 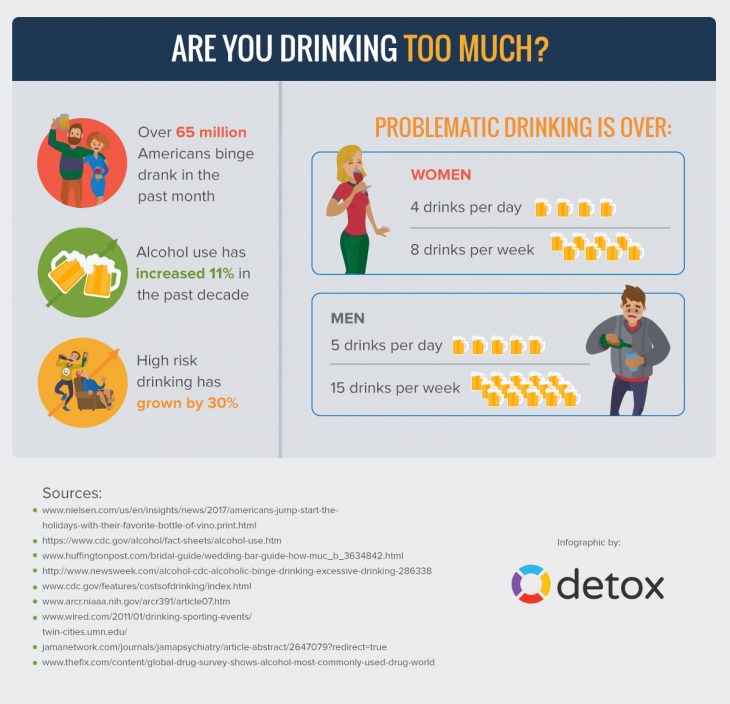 Here’s how to help an alcoholic stay on track with sobriety:

If you or your loved one needs help managing alcohol consumption, understand that help is available and nearby. Call our 24/7 confidential helpline at 800-483-2193(Who Answers?) to learn more about nearby alcohol detox centers devoted to guiding you along the path to lifelong sobriety from alcohol.