PTSD and Substance Abuse in the Military

Post-traumatic stress disorder and substance abuse affect more than two in every 10 veterans in the U.S. PTSD by itself is common among military men and women on behalf of factors such as combat and exposure to life-threatening situations. Many times, veterans who suffer from PTSD rely on drugs and alcohol to escape from symptoms associated with this trauma-driven mental health disorder.

While drugs and alcohol may numb PTSD symptoms for a short time, this coping method carries a high number of risks, and can lead to lifelong problems with addiction. Plus, using drugs and alcohol to relieve symptoms of PTSD fails to address the underlying root cause of trauma — leaving veterans caught up in a vicious, ongoing cycle of addiction and mental illness. Fortunately, many addiction treatment centers throughout the U.S. offer programs aimed at helping U.S. veterans overcome both PTSD and substance use disorders.

Here’s an in-depth look at VA substance abuse in the U.S., and at how PTSD and addiction can be successfully and effectively treated at a drug or alcohol treatment center.

Contact Detox.com now to find drug and alcohol detox centers near you!

Veteran Drug Abuse: How Common is it?

In 2008, roughly 47 percent of active military personnel reported binge drinking regularly, but this rate was 27 percent higher among those exposed to high levels of combat. Another study found that a quarter of young adult veterans between the ages of 18 and 25 suffered rates of substance use disorders that were five times higher than that for veterans over the age of 55. Drugs and alcohol also play large roles in military suicide rates — a 2010 report found that roughly 29 percent of suicides among active military between 2005 and 2009 were related to drug and alcohol use, while prescription drugs were involved in one-third of military suicides during 2009.

Alcohol, prescription drugs, and nicotine are the most commonly abused substances among active military personnel and veterans. This may be attributed to the fact that active military personnel undergo routine drug screening for illicit substances, and cannot be caught with substances like heroin, methamphetamine, and marijuana in their bloodstreams. Service members caught using illicit substances face the risk of being dishonorably discharged, and may even go to jail or prison for testing positive on their drug tests.

When it comes to prescription drug use, opioids and benzodiazepines are the most commonly abused substances among veterans, since these medications are prescribed to treat pain and anxiety, respectively. Opioids can relieve pain caused by combat-related injuries, while benzodiazepines can help relieve anxiety caused by stress and mental health disorders like PTSD. Research shows that the number of opioid prescriptions written by military doctors quadrupled between the years 2001 and 2009.

Common Causes of PTSD in the Military

PTSD is a mental health condition that develops after someone has experienced or witnessed a life-threatening event. PTSD is mainly characterized by reliving the event through nightmares and memories, avoiding situations related to the event, and feeling especially alert and jittery while being on the constant lookout for danger. Traumatic events that cause PTSD can also change the way a person feels about life, and trigger feelings of guilt, shame, anger, and sadness.

PTSD is the human body’s way of coping with dangerous, traumatic events, and usually goes away on its own after a few weeks or months. But PTSD that lasts longer can lead to more serious mental and physical health problems, especially when this mental health condition leads to drug abuse.

Detox treatment can address substance abuse and PTSD. Get the help you need today!

Here are common causes of PTSD among the military:

While PTSD and substance abuse may be closely linked, not all veterans who suffer from substance abuse do so because of PTSD. Common causes of substance abuse for the general U.S. population are environment, family history, and peer pressure. But compared to civilians, men and women in the military often work under more high-stress and traumatic conditions that make them more prone to substance abuse. 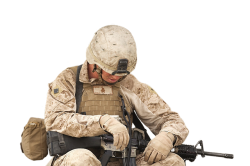 Veterans often turn to drugs and alcohol to “forget” about their trauma for a short time, and to treat adverse, debilitating symptoms. For example, veterans may binge drink alcohol to relax and block out unwanted thoughts about the event, or use prescription drug stimulants like Adderall with hopes of improving their focus and concentration, and to stay alert for the next potentially dangerous event.

In addition to PTSD, veterans also commonly suffer from depression and anxiety.

Veterans who sustained injuries while in combat can experience lasting chronic pain that is commonly treated with opioid painkillers. A recent study found that roughly 44 percent of veterans in the U.S. suffer from chronic pain, and that veterans are twice as likely as non-veterans to die from opioid overdoses. Veterans who are unable to overcome pain or who lack access to effective alternative treatments often abuse opioids to avoid chronic pain.

What is Being Done to Help Addicted Veterans?

Of the thousands of veterans who suffer from addiction, only 40 percent of those diagnosed with PTSD and substance abuse receive treatment as needed. Stigma often plays a major role in preventing military veterans from seeking treatment, since many fear that doing so will cause them to lose out on advancement or employment opportunities, and lead to personal embarrassment and disappointment among fellow soldiers and loved ones.

Other barriers that prevent addicted veterans from seeking treatment are cost and access to care. For instance, veterans who were dishonorably discharged due to illicit drug use are often not eligible to receive benefits that offer free access to care, while veterans who live in rural areas have less access to mental health and addiction treatments.

Now that addiction rates are higher among U.S. veterans — especially opioid addiction, which affects over 68,000 veterans — a number of healthcare providers and institutions are working on ways to expand access to treatment for these individuals. In a 2012 report to the Department of Defense, the Institute of Medicine suggested expanding insurance coverage for veteran drug abuse, and giving healthcare providers the resources and training needed to better identify substance use disorders among veterans. The IOM also suggested limiting access to alcohol on military bases, and increasing confidentiality for veterans who decide to seek treatment to negate problems surrounding stigma.

The U.S. Army recently put restrictions on opioid prescriptions so soldiers can use opioids for no longer than six months. Active Army personnel who do use opioids now have their medications closely monitored by doctors and pharmacists to prevent the incidence of an accidental overdose, or the mixing of deadly drug combinations like opioids and benzodiazepines. Government agencies are also continuing to work on studying causes of PTSD and substance abuse among veterans to develop better prevention and treatment methods.

If you or someone you love is a veteran struggling with PTSD and substance abuse, call now to find a detox program that can help you recover.

Treatment for Veterans with Substance Use Disorders

PTSD and substance abuse among veterans is commonly treated using detoxification, support groups, and therapy like cognitive-behavioral therapy, or CBT. All these treatments help veterans overcome physical dependence on drugs and alcohol, psychological addiction, and symptoms associated with PTSD. Furthermore, all these treatments are available at many drug and alcohol detox centers.

Detox is the first stage of treatment for VA substance abuse and PTSD, and helps veterans overcome physical dependency on drugs and alcohol. Detox allows veterans to achieve improved overall health and sobriety so they can move on with overcoming the root causes of their addiction and PTSD. Drug and alcohol detox is safest and most effective when conducted in an inpatient treatment setting, where veterans have 24/7 access to medical staff and counselors throughout withdrawal.

Use our comprehensive detox center directory to find nearby drug and alcohol detox centers in your city and state. Explore your options for medical detox programs, medically assisted detox programs, and medication-assisted treatments that involve the use of FDA-approved drugs designed to eliminate cravings and withdrawal symptoms.

Support groups for veterans who suffer from PTSD and substance abuse are often extremely helpful at making veterans feel more positive about their recovery. Support groups teach veterans how to handle daily challenges surrounding coping with PTSD and staying sober, and allow them to bond with other veterans who share highly similar struggles. Support group therapy also teaches veterans how to establish trust with new people, and how to discuss topics related to their traumatic experiences without suffering a relapse.

Research shows that CBT is one of the most effective treatments for PTSD in that this therapy strongly reduces related symptoms more than any other non-drug treatment. Trauma-focused CBT helps veterans tackle the negative thoughts and behaviors associated with the trauma, and discover new, healthier ways to cope with and overcome trauma.

Sometimes, CBT involves a treatment method called prolonged exposure, or PE, where veterans revisit their trauma with doctors in a safe clinical setting to change the way they react to triggers and stressful situations. PE is shown to be effective in roughly 60 percent of veterans who suffer from PTSD, and can be included as part of substance abuse treatment.

Other treatments for PTSD and substance abuse include individual, group, and family counseling. One-on-one counseling sessions allow veterans to speak openly and alone with medical professionals in a safe, confidential environment, while group therapy is similar to support group therapy in that veterans can recover by bonding with and learning from others. Family therapy helps family members of veterans better understand the struggles associated with PTSD and addiction so they can offer their loved one the support needed to stay healthy, happy, and drug-free.

If you’re a veteran struggling with addiction and PTSD, or know someone who needs help overcoming veteran drug abuse, call our 24/7 confidential helpline at 800-483-2193(Who Answers?). Our caring drug abuse counselors will help you find the best drug detox center in your area ready to guide you or your loved one along the path to sobriety.