State of Emergency: How to Fix the Opioid Epidemic

There’s no denying that the United States is suffering an opioid epidemic, and we need to take action before the terrible crisis gets even worse. In 2015, over 33,000 Americans died from fatal opioid overdoses, and in 2016, that number climbed to 59,000.

Drug overdose has become the leading cause of accidental death in the United States.

Everyone is impacted by the opioid epidemic, either directly or indirectly. In 2012, almost 22,000 infants were born dependent on opioid drugs, and considering the dramatic rise in addiction and overdose in recent years, those numbers could have easily doubled in the past five years.

The United States currently suffers over 100 opioid-related fatalities every day, and with dangerously potent synthetic opioids becoming more available all the time, these daily deaths could soon become as high as 250. Experts observing how 33,000 Americans dying of opioid overdose in 2015 rose to 59,000 fatal overdoses in 2016, say that the annual death toll could climb to over 93,000 within another year or two. In addition to the tragic deaths and emotional pain and devastation that individuals suffer due to the opioid epidemic, there is a massive financial toll on the U.S. economy—a drain of 78.5 billion dollars in 2015 alone.

But how did we even get here? One of the biggest reason is the overuse and misuse of prescription painkillers. In fact, 80% of heroin users first became addicted to prescription opioids.

The problem began as a combination of greed and misunderstanding. Pharmaceutical companies heavily marketed opioid pain relievers to physicians in the late 1990s, insisting that these drugs would not be addictive to their patients. By the time it became clear that this was completely false, it was too late. Widespread misuse, addiction, and illicit diversion of these drugs began driving up the overdose rate and causing a related rise in the demand for heroin. In addition, neonatal opioid dependency rates were rising, as was the spread of blood-borne diseases like Hepatitis C and HIV, thanks to increases in IV drug use.

What is being done to combat the opioid epidemic?

In a recent speech, President Trump declared that our country is facing “the worst drug crisis in American history,” and that “addressing it will require all of our effort.” He also said, “We can be the generation that ends the opioid epidemic.”

So, what exactly are the efforts that the Trump administration is employing to end America’s opioid epidemic?

This three-prong plan has been widely criticized by experts who claim that it neglects additional solutions that had been recommended by the White House commission on the opioid epidemic, such as:

The Trump administration stated that some of these solutions are also underway, with the FDA expanding education requirements for opioid prescribing, as well as working harder to promote medication-assisted treatment for opioid addiction, but there is no additional funding attached to these efforts, meaning their chances for success are limited. The 500 million dollars that Congress currently spends on rehab programs for addiction will run out next year, and efforts to find new funding for these programs are extremely problematic. For example, Republicans created bills that would dedicate $45 billion towards opioid abuse prevention if passed, while at the same time repealing the Affordable Care Act, which would leave millions of Americans who need addiction treatment without the insurance coverage they need to afford it. In addition, the Trump administration is proposing a $400 billion budget cut for the Substance Abuse and Mental Health Services Administration in 2018, which will seriously impair that organization’s ability to do the very work we need to remedy widespread opiate addiction and overdose.

So, what else can we do to fight the opioid epidemic? 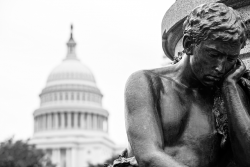 The American opioid epidemic has been declared a Public Health Emergency.

One solution that is already underway is that the DEA and Department of Justice are changing the status of fentanyl and fentanyl analogues from Schedule II drugs to Schedule I. Schedule II drugs are legally declared as dangerous with a high risk for misuse, dependence, and addiction; while Schedule I drugs, such as LSD and heroin, are legally declared as having no accepted medical use in the United States. Fentanyl is between 50 and 100 times more powerful than heroin, and the fentanyl analogues that overseas manufacturers create are 100 times more powerful than fentanyl, making these drugs a major contributor to the skyrocketing rates of opioid overdose fatalities.

Medication Assisted Treatment, which integrates medications and counseling to fight opioid addiction, needs to be better supported and more widely available as well. Commissioner of the Food and Drug Administration Scott Gottlieb believes that expanded use of this treatment approach could greatly reduce opioid overdose fatalities. Patients who receive Medication Assisted Treatment with medications such as methadone, naltrexone, and buprenorphine cut their risk of dying by half, but due to inadequate insurance coverage, many people aren’t able to get these treatments, or aren’t able to choose between them so that they receive whichever medication that they and their doctors decide is best. Even patients who are able to get the right medication for them may have to stop taking it prematurely due to time limitations on their prescription insurance coverage.

Medication Assisted Treatment could save your life. Get the help you deserve today!

Pew Charitable Trusts released a report last year that concluded Medication Assisted Treatment was the best-known way to combat opioid addiction, and was much more effective than either medication or behavioral counseling used on their own. Sadly, a lack of programs to help individuals with opiate detox and treatment means that Medication Assisted Treatment is often unavailable to reduce illicit use of opioids and decrease overdose fatalities the way the approach has been proven to do.

Accessible, effective treatment is important, but one of the best ways to end the opioid epidemic is through prevention efforts. Widespread addiction education is needed to ensure that everyone in the general public understands how addictive and destructive opioid drugs can be. Too many people assume that these medications are safe because they are prescribed by doctors, and too many fail to realize that misusing these drugs can rapidly lead to physical and psychological dependence—at times as quickly as the first use. Addiction is preventable, so it therefore makes sense to do everything we can to stop opioid addiction before it even starts.

Opioids are a legitimate treatment for pain, and need to remain available to treat short term pain, such as that caused by injury or surgery. But patients who take opioid drugs need to understand the dangers of long term use and any misuse of the drugs, and patients with chronic pain need to be given more non-opioid options for relief.

If you or someone you love struggles with opioid dependence, call now to find the best detox program for your needs.

Another aspect of addiction education should involve making people aware that addiction is a chronic illness and not a weakness, character flaw, or moral failing. The disease of addiction is treatable with proven methods that need to be delivered with the same dignity and compassion as treatments for other chronic diseases such as hypertension and diabetes. For example, a doctor who is reporting to a diabetic patient that their blood test revealed dangerously high blood sugar levels would never say that the test results came back “dirty,” so why would we say that to patients being given the results of a drug test?

Addiction education made a big difference to the rates of drug use in the recent past. The high rates of drug addiction in the 1970s and 80s were cut in half by 1992, thanks to nationwide, multi-sourced efforts. Politicians, healthcare providers, professional athletes, entertainment professionals, parents, and educators all banded together to make sure the anti-drug message was heard by America’s youth before they were even presented with the chance to use drugs. Those efforts worked then, and they can work again now.

Surgeon General Vivek Murthy stated that we not only need to make sure that healthcare professionals understand how to treat pain, we need to make sure that pain management alternatives are included in insurance coverage. The CDC reports that as many as three in four heroin users started off by misusing prescription painkillers. In 2010, the number of opioid painkillers prescribed were enough to keep every single person in the U.S. medicated 24 hours a day for a month straight.

In addition, research needs to be done into non-opioid painkillers, and other forms of non-addictive pain management techniques, for the millions of Americans who suffer from chronic pain.

Turning the Opioid Epidemic Around with Opiate Detox and Addiction Treatment

There is no one, surefire solution to the American opioid epidemic, but one of the best ways to turn things around is through quality opiate detox and addiction treatment. If you or someone you love is struggling with an addiction to opioids, it is time to seek professional help.

Opiate addiction is treatable, and opiate detox and addiction treatment can also be affordable, even to people with financial concerns. Most insurance plans cover opiate detox and treatment, and for individuals without insurance, there are low and no cost treatment facilities available. Some of these facilities charge on a sliding scale that is based on income, making sure you only pay what you can afford to pay, and some are free, funded by local churches, nonprofit organizations, or federal and state programs.

Sorting through the available options to determine the right opiate detox facility for your personal, financial, biological, and social needs can be overwhelming, but it doesn’t have to be. The detox center directory on Detox.com can connect you to quality treatment programs near you. If you would like more hands-on help, you can contact our addiction treatment experts via email, online chat, or by phone at 800-483-2193(Who Answers?). These treatment professionals are available to help you 24 hours a day, seven days a week, making it simple for you to take action to overcome addiction and transform your life.