How Long Does it Take to Detox from Fentanyl?

In recent years, fentanyl has become one of the deadliest drugs in the United States. Fentanyl is a Schedule II opioid drug commonly prescribed by U.S. doctors to treat severe pain, but can also be illicitly purchased on the streets and from China via the Internet. Fentanyl is up to 50 times stronger than heroin, and up to 100 times than morphine. Only two milligrams of this drug can trigger an overdose and cause death.

Fentanyl is highly addictive, and can quickly lead to physical dependence when misused. Thousands of Americans are suffering overdoses associated with this powerful, potent drug — including emergency responders who accidentally come into contact with fentanyl when arriving at overdose scenes. Though fentanyl is extremely dangerous and can lead to death after just one use, detoxing or withdrawing from this drug comes with its own serious risks due to the severe effects of this substance on the brain and body.

Continuing fentanyl use can drastically increase one’s risk for an overdose and death, but a professional fentanyl detox can help individuals safely quit using with a lowered risk for complications.

So, exactly how long does it take to detox from fentanyl? Here’s what you need to know about fentanyl detox, and how you or your loved one can stay addiction-free after overcoming fentanyl dependence and addiction.

Fentanyl Use and Addiction Rising in the U.S.

Medical examiners across the U.S. say these numbers are likely much higher, since many states do not test for fentanyl, and do not list specific prescription drugs on death certificates. As of 2017, New Hampshire has the highest recorded number of fentanyl deaths per capita, with two-thirds of all drug-related deaths in the state involving fentanyl.

Evidence shows that the majority of overdose deaths involving fentanyl across the U.S. are being caused by illicit fentanyl purchased on the streets and from China. The number of seizures and confiscations of illicit fentanyl increased seven-fold from 2012 to 2014, indicating that the rise in fentanyl use in the U.S. is mainly being driven by illicit sources.

Fentanyl use in the U.S. is also being driven in part by the nation’s opioid crisis. Those who become dependent on opioids such as heroin and oxycodone become tolerant to their usual doses, and require higher amounts to experience euphoria and other effects. When these individuals can no longer feel the effects of opioids they’re already using, they seek out fentanyl to experience a more powerful high.

The DEA reports than one kilogram of fentanyl can be purchased overseas for as little as $3,000, and then illicitly sold in the U.S. to generate more than $1.5 million. Since fentanyl is significantly cheaper to buy and produce than heroin and cocaine, many dealers are cutting or mixing these drugs with fentanyl — further driving the number of unintentional overdoses. People using these drugs are often unaware they’re using fentanyl, and are dying from overdoses as a result.

To address the nation’s rising fentanyl problem, policymakers suggest that doctors and prescribers minimize the use of opioids for treating pain, and look to other effective treatments that may be safer, such as acupuncture. Also, the CDC suggests that law enforcement continue to work toward reducing the distribution of illegal fentanyl. To reduce overdose deaths caused by fentanyl, lawmakers propose increasing access to fentanyl addiction treatment, as well as access to naloxone — an antidote with the ability to reverse opioid overdoses.

How to Detox From Fentanyl Patch, Tablets, and All Other Forms

Prescription fentanyl in the U.S. is often administered as a transdermal patch or injection, and also comes available in lozenge form. However, illicit fentanyl sold on the streets or purchased from China is often available in powder form, or transferred to blotter paper that users can put in their mouths. Fentanyl can also be cut or mixed into heroin and cocaine, or made into tablets that resemble less potent painkillers.

Over time, fentanyl abuse and dependence can alter normal brain and bodily function, making it difficult for users to quit without professional detox treatment. Quitting fentanyl abruptly, or cold turkey can trigger a range of mild to severe withdrawal symptoms that can put one’s overall health at risk. Stopping fentanyl use abruptly also increases the risk for relapse, overdose, and death — especially when people quit using fentanyl for a period of time, and return to using high doses their bodies can no longer handle.

With tapering, patients reduce their fentanyl doses gradually over time so their bodies can overcome dependence without suffering withdrawal symptoms and related health risks. Tapering is normally facilitated by doctors who can carefully monitor their patients’ symptoms and progress throughout fentanyl withdrawal.

The tapering detox method allows patients to slowly, safely, and comfortably overcome fentanyl dependence over a period of weeks or months without suffering cravings and other severe withdrawal symptoms. Some patients who detox from fentanyl using the tapering method can even resume daily life activities during treatment, which benefits those who also manage jobs, school, and families.

Sometimes, fentanyl in tapering is often replaced with other opioids that carry a far lower risk for dependence and addiction. Morphine, methadone, and buprenorphine are the most common medications approved by the FDA for use in treating fentanyl dependence.

Fentanyl dependence can also be treated using a rapid detox method –  an accelerated detox treatment that lasts two to three days. With rapid detox, patients are placed under general anesthesia and provided with medications that speed up opioid withdrawal. This allows patients to remain in a medically induced coma as their bodies go through withdrawal — eliminating pain and discomfort associated with symptoms.

The detox procedure itself often takes between four and eight hours to complete, but patients may spend two to three days in recovery as a whole so doctors and nurses can monitor their healing progress. Rapid detox is generally recommended for those in relatively good health whose bodies can withstand the intense, shortened withdrawal period associated with this detox method.

A detox program could save your life. Get the help you need today!

A medical detox typically takes place in an inpatient or hospital setting, and involves the use of medications that treat or eliminate one or more opioid withdrawal symptoms. Sometimes, the same medications used for tapering a patient off fentanyl are used in a medical detox, including methadone, buprenorphine, and naltrexone. An intensive inpatient medical detox usually lasts between three and five days.

Much like the tapering detox method, medical detox treatments allow patients to overcome physical dependence on fentanyl without suffering severe withdrawal symptoms. Patients can recover in a safe environment surrounded by medical staff who can quickly attend to their health needs in the event of complications.

How Long Does a Fentanyl Detox Last?

Fentanyl detox can last as little as three days, or as long as several months. The amount of time it takes to detox from fentanyl depends on a wide range of factors, such as the detox method being used, the severity of a person’s dependence and addiction, and whether a person also needs treatment for co-occurring disorders. Most detox centers work closely with patients to develop customized treatment plans based on each patient’s unique struggle with fentanyl dependence.

With the tapering detox method, the patient’s tapering schedule is often based on the severity of their dependence. For instance, those who have been using exceptionally high doses of fentanyl for a long period of time, or who abuse other substances along with fentanyl usually taper off the drug slowly over a long period of time to prevent and manage withdrawal symptoms. 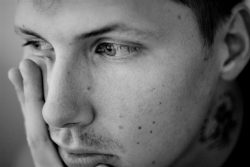 Fentanyl withdrawal symptoms are most severe on days 3 to 5.

While fentanyl withdrawal symptoms may not be fatal on their own, some symptoms can increase the risk for serious health complications in those who quit cold turkey without professional detox treatment, or who try at-home detox treatments. For instance, vomiting and diarrhea increases the risk for dehydration and malnutrition, while chronic depression increases the risk for suicidal thoughts. Withdrawing from fentanyl is safest when performed at an opiate detox center under close medical supervision.

Those who have been physically dependent on fentanyl for an extended period of time may experience post-acute withdrawal syndrome, or PAWS. PAWS is when withdrawal symptoms are intensified on behalf of long-term opioid abuse — especially psychological symptoms such as depression and suicidal ideation. In some people, PAWS can last for many years after finishing addiction treatment, which makes it more challenging for these individuals to stay drug-free without ongoing therapy.

Following fentanyl detox, many opiate detox centers offer continuing care in the form of 12-step support group therapy, relapse prevention training, and individual and group counseling. Patients who continue to experience feelings of anxiety and depression after recovering from fentanyl abuse may be treated for these conditions with prescription medications and counseling. Continuing care therapies teach patients the skills they need to fight psychological cravings, and navigate daily life without turning to fentanyl and other substances.

If you or someone you love is struggling with post-acute withdrawal syndrome, call now to find a treatment solution that is right for you.

Continuing care, also known as aftercare, is vital for helping patients stay addiction-free in the weeks, months, and years after overcoming fentanyl dependence. Continuing care helps patients identify, manage, and/or overcome the root cause of their addiction using a combination of therapies.

If you or someone you love is dependent on fentanyl, opioids, or another substance, understand there are nearby drug detox centers that can help. Call our 24/7 confidential helpline at 800-483-2193(Who Answers?) to speak with an experienced drug abuse counselor who can answer all your questions about fentanyl detox. We’ll help you find the nearest drug detox center ready to help you or your loved one achieve a healthier, more fulfilling addiction-free lifestyle.