Are Your Alcohol Blackouts Signs of Alcoholism?

Drinking usually has a negative effect on memory function. But did you know that drinking too much too fast can actually block your brain’s ability to create new memories?

These alcohol blackouts – where you have no memory of what happened at all – or alcohol brownouts – where you can only recall foggy bits and pieces of what you did while drinking – can be scary. Memory gaps due to drinking can result in everything from confusion or embarrassment to tragedy and trauma.

But are alcohol blackouts and brownouts signs of alcoholism?

When should you be concerned about blacking out from alcohol?

In the past, addiction experts saw alcohol blackouts as a basic early warning sign of alcoholism. If you experienced a blackout while drinking, you were diagnosed as an alcoholic. That perspective has shifted a little over time, due to more recent research which indicates that people without a drinking problem can also experience blackouts.

Alcohol blackouts are not uncommon, especially in new drinkers.

Over half of college students have experienced an alcohol blackout at least once in their lives.

An alcohol blackout can be brought on by inexperienced drinking, or one night of overdoing it. If this is your first time blacking out, you probably don’t have to worry about early signs of alcoholism.

In order to experience an alcohol blackout, you have to drink heavily in a short period of time, meaning more than three drinks for women, and more than four drinks for men, per day. Twenty-five percent of people who drink in this way on a regular basis, even if limited to only once a month, already have an alcohol use disorder and those who don’t are at risk of developing a problem if the heavy drinking continues.

What causes an alcohol blackout?

Simply put, an alcohol blackout is caused by a rapid increase in your blood alcohol concentration, which is brought on by drinking a high volume of alcohol in a short period of time.

The memory impairment caused by alcohol is a result of alcohol’s ability to suppress the functions of the brain associated with memory. This effect can be noticed after only one or two drinks, and rapidly gets worse as alcohol consumption increases.

In some people, this impairment becomes so severe that their ability to form memories while drunk is completely blocked, which results in an alcohol blackout. At this point, alcohol can also impair other brain activity associated with bodily functions, balance, motor control, decision making, speech, and cognition.

Encoding – when you register information around you

Storage – when you store that information as a memory

Retrieval – when you recover that memory from your brain

Alcohol blackouts can be dangerous; get the help you need today!

Alcohol interferes with each step of this process. It dulls your perception so that you cannot properly register what you see, feel, and hear; and it lessens your ability to accurately interpret whatever sensory information you are able to register. This encoding impairment is one of the reasons why it is so dangerous to drive while intoxicated.

Alcohol’s impact on storage and retrieval is so profound that it can cause you to forget a conversation you had while completely sober if you follow up that conversation with a session of binge drinking.

People in the midst of a blackout may appear to be relatively normal, if intoxicated, throughout their state of intoxication, because they are still able to keep information in their short-term memory for a couple of minutes at a time. This allows them to have conversations and perform tasks in a way that conceals how impaired they truly are—which puts them at risk of suffering from their own actions, as well as the actions of others around them.

Are blackouts and memory loss early signs of alcoholism? 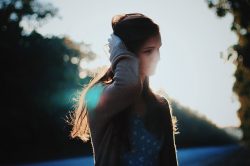 If you engage in heavy drinking despite experiencing blackouts, you may have an alcohol use disorder.

If you have experienced repeated alcohol blackouts and are continuing those drinking patterns, you may have reason to be concerned about your alcohol consumption.

To figure out if your own alcohol blackout is a sign of alcoholism, take a closer look at your overall behavior:

If you answered yes to two or more of the questions above, you may be suffering from alcoholism. Know that it is dangerous to drink to excess often, to feel unable to control your own drinking, and to develop an unhealthy dependence, both physical and psychological, on the effects of alcohol.

Self-medicating with alcohol is particularly concerning. If you are experiencing a great deal of personal conflict, high stress, or any other undesirable emotions or mental state, excessive drinking can provide an easy—and dangerous—escape, allowing you to temporarily remove yourself from your usual experience of reality. When you are drinking to “forget” and intentionally blacking out on a consistent basis, you are likely suffering from an alcohol use disorder.

College years are a particularly dangerous time to black out, as an estimated 1,825 college students die each year from unintentional alcohol-related injury.

The college environment has a way of promoting excessive drinking in students. Over 80% of college students report drinking alcohol, and nearly half of them report binge drinking within the previous two weeks. This behavior can have a massively negative impact on students, from academic problems such as missing class and failing exams to liver damage caused by excessive alcohol consumption to car accidents caused by intoxicated driving.

Students don’t even have to drink alcohol themselves to be hurt by excessive drinking. Approximately 696,000 college students are physically assaulted each year by another student who has been drinking, and over 97,000 are sexually assaulted by someone who is under the influence of alcohol. College drinking is an issue that impacts all college students, whether they are sober or not.

While most college students will leave their binge drinking days behind after graduation, some will be unable to, and the consequences of their inability to stop drinking will only worsen over time. Alcohol use disorders after college can interfere with your personal obligations, finances, career, relationships, and health.

Common Behaviors of an Alcoholic

If you have experienced multiple alcohol blackouts and still continue to drink, you should examine your life for any common behaviors of an alcoholic:

Is it time to seek alcohol detox treatment?

It isn’t unusual, or even necessarily problematic, for a person to occasionally try and ease stress or negative emotions with a couple of drinks, or to prep themselves for a social event by drinking a little “liquid courage.” The danger comes in when you start to rely on alcohol as a regular solution to problems and challenges.

This pattern of alcohol use will cause you to begin losing your ability to cope with problems and challenges without turning to alcohol. Eventually, the alcohol consumption itself can become a problem, causing health issues, emotional reactions, depression, anxiety, and life conflicts and challenges that would not have existed if it weren’t for your excessive drinking.

If alcohol use is disrupting you or your loved one’s life, call now to discuss detox options with a caring treatment specialist.

It comes down to this: you may have started out using alcohol to control aspects of yourself and your emotions, but over time, alcohol started to take control of you.

Your drinking feeds on itself, creating more problems that push you to consume more alcohol in response, which only makes the situation worse and your compulsion to drink more intense. No one sets out to become an alcoholic; addiction simply takes over your life, actually altering your brain chemistry in ways that teach you to prioritize drinking over other, healthier behaviors.

Getting an alcohol detox, followed by an addiction treatment program, is the best chance you have to break free from alcohol’s sway and reclaim your life. There are a wide range of treatment programs and rehab facilities available across the nation, and no matter your location, finances, preferences, or problems, there is a good option out there to facilitate your own recovery.