Discover the Cost of Heroin Addiction Per Day in the U.S.

As millions of Americans continue to struggle with opioid addiction, it should come as no surprise that heroin use is also becoming more widespread. Heroin is stronger, lower in cost, and easier to obtain than most painkillers. But though heroin is favored for its low cost among those who abuse painkillers, heroin addiction is still an expensive habit that not only drains your savings account, but may end up costing you your life as well.

Surveys show that roughly 4.8 million Americans have used heroin at some point in their lives, and that 435,000 people use heroin regularly. Research also shows that within the last decade, heroin use has more than doubled among Americans between the ages of 18 and 25. Heroin-related overdose deaths have more than quadrupled since 2010, and increased by over 20 percent from 2014 to 2015.

Heroin addiction is quickly on its way to becoming a serious epidemic, and is draining U.S. resources. If you suffer from heroin addiction, continuing to use this opiate without seeking professional help significantly increases your chance for experiencing a deadly overdose.

Here’s a close look at the cost of heroin addiction per day, and how using this drug can lead to serious life problems and health complications. 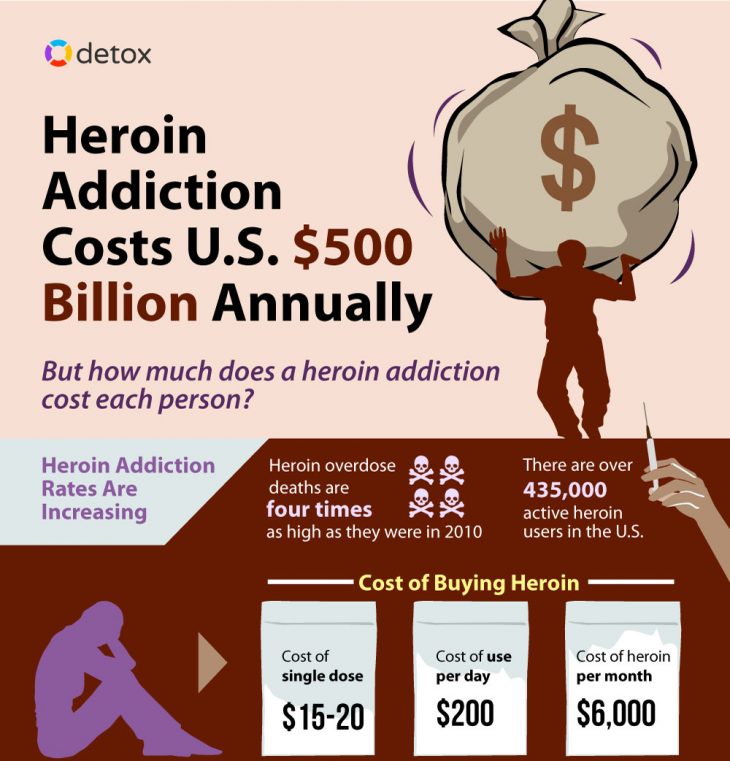 The Cost Per Day of Being a Heroin Addict

When it comes to the true cost of heroin addiction, people often fail to consider the many other costly factors that can result from drug use. For instance, ambulance rides and visits to the emergency room can quickly add up, as can the amount of wages you might lose calling in sick to work. The cost of heroin addiction per day is actually much greater than the cost of the drug itself when you add in all these other x-factors.

Cost of the Drug

The average cost of a single dose of heroin sells for between $15 and $20 on the streets in most U.S. cities. Someone dependent on heroin will spend between an average of $150 and $200 per day just on drug supply. This daily amount can be made even higher when you factor in extra costs such as transportation to and from the heroin dealer, and the cost of lost wages from missing work to obtain more heroin.

Research shows that the average cost for one full year of methadone maintenance therapy for heroin addiction is about $4,700 per person, while one full year of incarceration can cost about $24,000 per person. Though heroin addiction treatment may seem costly at first glance, choosing this route offers a long list of benefits that can lead to improved health and a much more fulfilling life.

Heroin use puts people at high risk for drug overdoses that require immediate medical attention. Ambulance rides, visits to the doctor, and other various health-related treatments can cost up to several thousand dollars per instance. A heroin addict without health insurance will often end up paying around $1,000 for an ambulance ride, and up to $3,500 for a trip to the emergency room after suffering an overdose.

Heroin addiction can negatively impact your work performance, and lead to fewer opportunities for advancement, raises, and recognition. Heroin addiction can even lead to a higher number of sick days and late arrivals as you cope with the effects of cravings and withdrawal, and start prioritizing heroin use over your career.

Many who struggle with heroin addiction often end up quitting or losing their jobs, or lack the motivation to find employment in the first place. Those who become incarcerated for heroin-related crime also suffer loss of wages due to being in jail or prison. Considering the median U.S. household income is nearly $60,000, those with heroin use disorders risk losing this yearly amount for as long as they stay caught up in addiction. 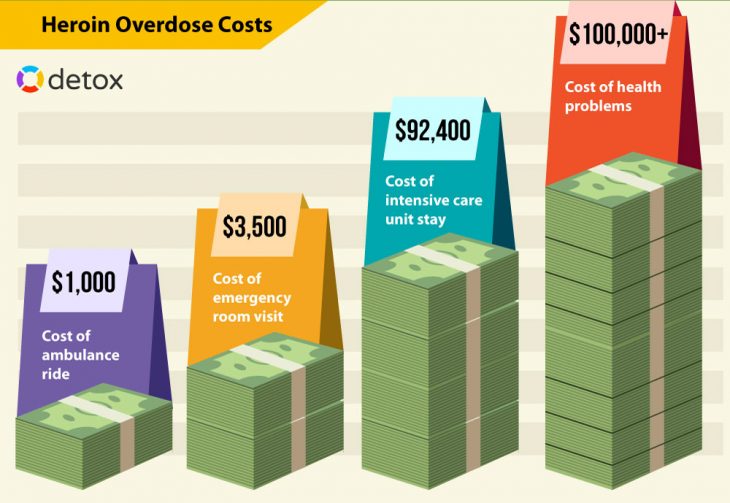 The Cost to your Health

Heroin addiction can cause a number of serious long-term side effects that will lower your immunity and overall life expectancy. Not only do many heroin-related health problems require costly medical treatment, but they can cost you your comfort, physical appearance, physical activity levels, mental well-being, and much more. Feeling sick and constantly suffering from health problems isn’t fun for anyone, and can prevent you from enjoying your favorite interests and spending time with loved ones.

Cost to your Relationships

Addiction changes your behavior, and causes you to lie, become more secretive, and do things that hurt the ones you love. Many who struggle with heroin addiction often suffer loss of relationships with friends, family, and romantic partners. Heroin addicts may even lose custody of their children due to factors such as neglect, abandonment, and incarceration.

Those who are caught possessing, manufacturing, selling, or distributing heroin may be charged with state and federal legal penalties that can cost up to $150,000. For instance, selling heroin can result in prison time and a $100,000 fee at the state level, as well as additional prison time and a $50,000 fee at the federal level. Factor in the cost of a lawyer and you may be paying up to thousands more for service fees.

Some heroin addicts may even pay for legal costs associated with crimes they performed while under the influence, as well as legal costs for divorce, child custody disputes, and other legal incidents that stem from heroin addiction. 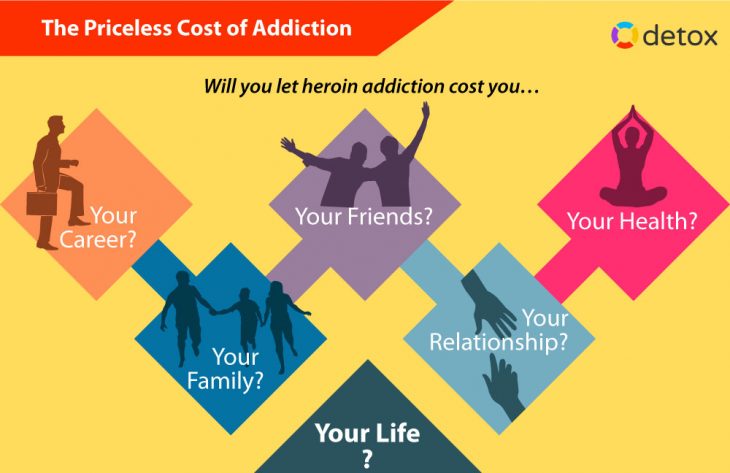 Cost of your Life

Heroin is sold illicitly on the streets — meaning the drug is unregulated and often mixed or cut with deadly substances that instantly trigger an overdose. Recent reports show that heroin is being mixed with dangerous synthetic opioids like fentanyl, carfentanil, and U-47700 — all of which are also causing accidental overdoses when inhaled by first responders who arrive at overdose scenes. Heroin often varies in purity levels from one batch to the next, which makes it difficult for some users to determine the safest dose.

In the long run, heroin will eventually end up costing you your life — whether it be over dangerous heroin-related crime, heroin-related health problems, or an overdose.

The Heavy Price Tag of Addiction in America

A recent study examined the effects of opioid addiction on the U.S. economy for the year 2013. Researchers found that the U.S. spent $78.5 billion on costs related to health care, substance abuse treatment, and incarceration costs revolving around illicit drug use.

Data from the study revealed that the U.S. spent almost $8 billion on criminal justice costs related to the selling and using of opioids, and that opioid overdose deaths cost the country almost $22 billion on health care and loss of business productivity for employers. Additionally, the average cost of treating an opioid overdose victim in a U.S. intensive care unit increased by 58 percent from 2009 to 2015, and is now around $92,400 per patient.

Heroin abuse causes lasting changes to the body and brain that can usually only be reversed with intensive medical treatment. For instance, heroin users are twice as likely to suffer from mental illnesses like depression, bipolar disorder, and PTSD. Heroin abuse can also lead to tolerance, dependence, and addiction.

Here are common long-term health effects associated with heroin use:

Heroin abuse weakens your immune system, which makes you more susceptible to illness and disease. Many of the above health conditions can become costly regardless of whether one has health insurance. For instance, gum disease causes gums to recede and teeth to rot, and requires the need for cosmetic dentistry and tooth implants — elective treatments that aren’t always covered by health insurers.

Unfortunately, many long-term health effects caused by heroin abuse can cost you your life — especially infections like hepatitis C and AIDS that often cannot be reversed. But on the plus side, heroin dependence and addiction can be fully and successfully treated at most heroin detox centers.

Heroin addiction can be safely treated at drug rehab centers that offer detox and counseling. Heroin detox is the first, most important stage of addiction treatment, as detox helps you overcome physical dependence on heroin. Heroin detox can be performed one of several ways, depending on the method that works best for you as both a patient and individual.

The purpose of heroin detox is to remove all traces of heroin from your body so you can function normally without craving the drug or suffering withdrawal symptoms. Heroin detox can take a few days, a few weeks, or a few months, depending on the detox method chosen. Many times, your doctors will replace heroin with an FDA-approved medication that eliminates heroin cravings and other withdrawal symptoms.

Methadone, buprenorphine, and naltrexone are drugs commonly used as part of most heroin detox treatments. Methadone and buprenorphine can be taken once per day to manage symptoms, while naltrexone can be taken once per month to block the effects of other opioids and to lower the risk for relapse. Patients using these medications are usually put on a tapering schedule — meaning doses will be reduced gradually over a set period of time until patients are completely drug-free.

Heroin detox is safest when conducted as a medical detox in an inpatient rehab setting. This allows you to recover under the close supervision of nurses and doctors who monitor your symptoms around the clock until withdrawal is complete. An inpatient medical detox also gives you 24/7 access to medical staff and addiction counselors who can support and guide you through your recovery.

Cognitive-behavioral therapy, support groups, and individual, group, and family counseling are just some therapies that help you overcome psychological causes of addiction. These therapies help you identify and correct negative thoughts and behaviors that may have triggered your addiction in the first place. Therapy is also available for those who suffer co-occurring mental health disorders on top of heroin addiction. 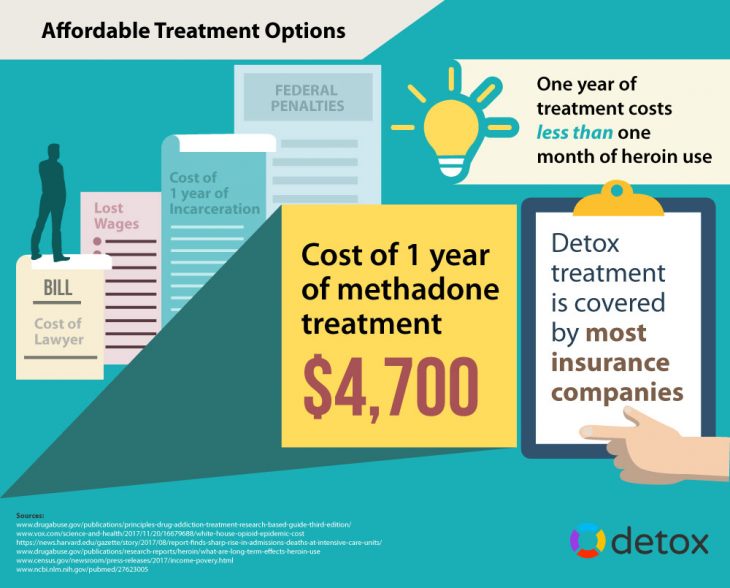 The Cost of Heroin Addiction Treatment

Heroin addiction treatment is proven to reduce heroin use and its related health and social costs. Considering the cost of heroin can be as high as $72,000 per year, those who struggle with addiction can easily benefit from receiving heroin treatment, which often ranges between $1,000 and $60,000. Inpatient programs generally cost more than outpatient programs since housing, meals, and other accommodations are often included.

Some who struggle with heroin addiction may qualify for free or low-cost heroin treatment on behalf of government funding and nonprofit organizations. Health insurers including Medicare, Medicaid, state-financed insurance, and military insurance may cover all costs associated with heroin treatment. Most heroin treatment centers offer a long list of payment options, and are willing to help you arrive at a financial solution that provides you or your loved one with treatment as needed.

If you or a loved one needs help fighting heroin addiction, call our 24/7 confidential helpline at 800-483-2193(Who Answers?). One of our caring addiction counselors will discuss all your heroin treatment options, and help you find affordable detox centers in your area ready to guide you along the path to lifelong sobriety from heroin.