The Scary Truth Behind States Affected By Drug Overdose

There were over 64,000 deaths caused by drug overdoses in the U.S. in 2016 — a death toll that ranks above the number of American soldiers who died during the entirety of the Vietnam War. The majority of those overdose deaths were caused by highly addictive opioids including fentanyl, oxycodone, and heroin. Scarily, the number of Americans who died from recent drug overdoses is expected to climb substantially in upcoming years, and could rise to more than 1.6 million over the next decade.

Drug overdose tends to carry a stigma that many people associate with those who party too much, those who are homeless, and hard-core addicts on the streets who inject deadly drugs like crack cocaine, crystal meth, and heroin. But in reality, drug overdoses are usually accidental and unintentional, and can happen to anyone who abuses or misuses legal or illicit drugs.

Here’s the hard truth behind drug overdose deaths in America, and at how these overdoses can be stopped and prevented.

Preventable Deaths are Soaring Due to the Opioid Crisis

Opioid overdoses led to 33,000 deaths in 2015, and 53,000 deaths in 2016. Opioids, also known as opiates or painkillers, are commonly prescribed to treat moderate to severe pain, as well as chronic pain. Opioids — especially heroin — are among the most highly addictive drugs in the world, and can lead to dependence and addiction in as little as two weeks.

A recent report from the White House said the opioid epidemic cost the U.S. economy $504 billion dollars in 2015. The Trump Administration declared the opioid epidemic a public health emergency in October 2017 to free up federal resources that could be used to help prevent overdose deaths. Under the declaration, a higher number of healthcare workers will be trained to assist in the crisis, and access to addiction treatment will be expanded to offer care to those in rural areas and states being hit hardest by the crisis.

In 1999, the U.S. suffered 23.1 deaths per 100,000 residents that were caused by drugs, alcohol, and suicide. But that number rose to 39.7 deaths in 2015 — a staggering increase of 72 percent driven in part by the opioid epidemic. Drug overdose deaths alone more than doubled from 1999 to 2015, and are expected to nearly double again from 2015 to 2025 unless the U.S. implements strategies that prevent drug dependence and addiction from occurring in the first place.

Certain states are being affected by drug overdose deaths more than others on behalf of factors such as lack of treatment facilities, poor prescribing methods among doctors, and lack of resources like prescription monitoring database programs that inform doctors of existing prescriptions by patient. In 2015, the state with the highest rate of deaths caused by drugs, alcohol, and suicide was New Mexico, followed by West Virginia.

Here are states predicted to have the highest rates of drug overdose increases in upcoming years.

Presently, for every 100,000 residents in New Mexico, there are 77.4 deaths caused by drugs, alcohol, and suicide. This number is projected to rise by 37 percent in the next 10 years to 105.7 deaths for every 100,000 residents. Drug use rates among teens in New Mexico are among the highest in the nation, and the state was the first in 2001 to increase access to naloxone — an opioid overdose antidote drug that reverses the effects of an overdose.

Contact Detox.com now to find drug and alcohol detox centers in your state!

There are 66.4 deaths in Wyoming for every 100,000 residents that are caused by suicide and substance abuse. This death rate is expected to increase by 34 percent in the next decade to 88.8 deaths per 100,000 residents. Local news sources report that Wyoming officials are unsure about the number of deaths caused by opioid prescriptions due to incomplete and inconsistent record-keeping practices among state coroners.

The Granite State suffers 60.6 drug, alcohol, and suicide-related deaths for every 100,000 residents — a number expected to increase by 45 percent to 88.1 deaths within the next decade. Fentanyl is associated with roughly 70 percent of all drug overdose deaths that take place in New Hampshire.

In Alaska there are 63 people who die from drug, alcohol, and suicide-related causes for every 100,000 residents — a number expected to jump by 34 percent to 84.4 by 2025. Opioids including heroin were responsible for 74 percent of drug overdose deaths in Alaska in 2016.

Rhode Island suffers a death toll of 54.5 for every 100,000 residents due to suicide and substance abuse. This number is expected to increase by 46 percent to 79.7 within the next decade. The majority of recent drug overdoses that occurred in Rhode Island in 2016 were caused by fentanyl.

The number of deaths in Nevada caused by drugs, alcohol, and suicide is 53.8 per 100,000 residents, and is expected to climb 40 percent to 75 deaths for every 100,000 residents by 2025. Nevada ranks second in the nation for the highest number of oxycodone and hydrocodone prescriptions.

How to Stop Overdose Deaths in America 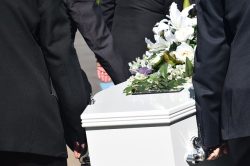 Drug overdose deaths are expected to double by the year 2025.

Drug overdoses in America can be entirely preventable as long as strategies are implemented to educate the public about the potential dangers surrounding drug use. Many states are increasing access to alternative pain treatments that don’t involve the use of addictive drugs like opioids, and are expanding access to addiction treatments to help those currently struggling with drug dependence.

Here are eight ways the United States can fight its overdose death tolls and the opioid crisis:

Physicians who have their patients’ best interests at heart can use alternate pain management treatments that don’t involve the use of opioids. Acupuncture, massage therapy, and yoga are all alternative treatments shown effective at treating pain.

The federal and state governments can improve policies surrounding the prescribing of opioids to prevent addiction from affecting new painkiller users. For instance, opioids can be a last-resort pain treatment doctors can use after other treatments have failed to offer pain relief.

Health insurers can start covering a higher percentage of costs associated with addiction treatments like drug detox, versus covering the cost of addictive painkillers.

Since drug detox treatments fail to address the psychological root causes of one’s addiction, those trying to overcome drug addiction can receive behavioral therapy and counseling to avoid relapsing on drugs and alcohol and suffering an overdose.

5. Educate the public about the opioid crisis

U.S. communities can offer and implement public education programs that teach Americans about the dangers surrounding prescription drug misuse, and of storing unused painkillers in their medicine cabinets.

6. Reduce the impact of drug use on children

Environment is a major risk factor for drug addiction — especially for children and teens who spend time in environments with exposure to drugs and alcohol. The U.S. can improve its support for children exposed to drug use on behalf of parents, other relatives, and the foster care system.

Alcohol abuse rates can be lowered by increasing alcohol costs, enforcing underage drinking, and limiting the hours during which alcohol can be purchased.

Injecting drugs intravenously increases the risk for diseases like HIV and hepatitis C, but implementing needle-exchange programs can help addicts stay safer and introduce these individuals to comprehensive treatment programs.

How to Prevent an Overdose

A drug overdose is often unintentional, and can be caused by any one of several reasons. One of the most effective ways to prevent an overdose is to gain complete understanding of how all types of drugs affect the brain and body. Drug education can help patients stay safe when using prescription drugs, and prevent Americans from abusing drugs under the assumption that all prescription drugs are safe to use with or without a prescription.

Here are other ways to prevent you and your loved ones from suffering a drug overdose.

Naloxone is an opioid overdose antidote that instantly reverses the effects of an overdose. Someone who is overdosing on heroin or painkillers can be administered naloxone and avoid falling into a coma or suffering death. Naloxone is available as an injection or nasal spray, and can be administered by anyone — including those who lack any medical training.

Naloxone is available in many states without a prescription, and can be obtained at most local pharmacies. Naloxone is also commonly carried by first responders such as law enforcement, paramedics, and firemen who are first to arrive at drug overdose scenes. If you think that you or someone you love is at risk for suffering an opioid overdose, talk to your doctor or local pharmacist about obtaining naloxone.

The root causes of addiction are often psychological, and stem from mental health disorders, trauma, and early exposure to drugs and alcohol. Addiction treatments focus on addressing these root causes so patients recovering from substance abuse benefit from a lower risk for relapse following treatment. Those who relapse often face a higher risk for a drug overdose since their bodies can often no longer able handle the high doses they were once using.

Cognitive-behavioral therapy, support groups, and individual and family counseling are therapies commonly offered as part of addiction treatment. These therapies help patients identify and overcome the root causes of their addiction so they can stay sober for life.

Detox is usually the first step of addiction treatment before therapy, and helps patients overcome physical dependency on drugs and alcohol. Detox helps prevent a drug overdose by eliminating the presence of all drugs and alcohol from the body, along with cravings for these substances. Today, many detox treatments involve the use of medications that prevent cravings vomiting, muscle pain, and other withdrawal symptoms so patients experience a safer, more comfortable recovery.

Now that the U.S. opioid crisis has been declared a public health emergency, drug detox treatments are becoming more widespread and easily accessible. Many health insurers now cover all costs associated with drug detox so those suffering from drug use disorders can become healthier and avoid an overdose. Those without health insurance plans who need help overcoming addiction may also qualify for free detox treatment on behalf of federal, state, and private funding.

If you or a loved one needs help overcoming drug addiction, call our 24/7 confidential helpline at 800-483-2193(Who Answers?). Our caring drug abuse counselors will discuss all your treatment options so you and your loved ones can avoid a drug overdose and achieve a healthier, more fulfilling drug-free lifestyle.