IV Meth Addiction: What You Need to Know

Methamphetamine is commonly smoked, snorted, and injected, but those who use meth intravenously are often at higher risk for addiction and other life-threatening health complications. IV meth use increases a person’s risk for contracting infectious diseases like HIV and hepatitis, and can lead to drug dependence and addiction more quickly than other methods of use. Fortunately, IV meth users can lower their risk for these health conditions by stopping meth use and seeking treatment in the form of a professional meth detox.

Signs of IV Meth Use

People who use meth generally seem anxious and restless, and may be more energetic and physically active than usual. They may act extremely happy and euphoric, have a decreased need to sleep, and eat less frequently due to loss of appetite.

Here are other common signs of IV meth use.

Track marks are scars that are left behind after a person injects drugs like meth. They may look like puncture marks, scabs, or bruises, depending on where the track marks are at in their healing stage. Track marks are usually dark in appearance and slightly raised above the skin.

As a person continues using meth intravenously, track marks can become broken and start bleeding, and lead to infection. Track marks can be caused by using old, dull needles, or by using the same injection site repeatedly. Using meth that has been mixed with other dangerous drugs like synthetic fentanyl can also cause track marks, since the unknown chemicals in substances like these can cause toxins to build up in the veins and bloodstream.

IV meth users may wear long sleeves to hide their track marks from others. Those who inject meth at other sites like the feet and neck may also wear socks, shoes, and scarves at all times to hide their scars. If your loved one has suddenly started dressing differently to cover certain parts of their body, it’s possible they may be injecting meth.

Call Detox.com now to find meth recovery programs near you!

Some IV meth users heat their needles prior to use, which can leave behind a dark, sooty-like residue at the injection site. These soot marks are also known as “sooting tattoos,” and may even cause veins to stay darkened due to contamination by the soot. Evidence suggests that some IV meth users may even get real tattoos to cover these soot marks and hide their drug use from others.

Those who use meth intravenously will use drug paraphernalia including needles, spoons, and torch lighters. They may also have rubbing alcohol and cotton balls on hand to disinfect the injection site, along with rubber tubing or a tourniquet to enlarge veins and simplify the injection process. Look for evidence of drug paraphernalia in your home if you think a loved one may be suffering from IV meth addiction.

IV meth use delivers the drug to the brain and bloodstream more quickly than methods of snorting or oral ingestion. People who inject meth begin to feel the drug’s effects almost immediately, and describe the high as an extremely pleasurable rush that lasts just a few minutes. However, the effects of IV meth can wear off just as quickly, which motivates some users to inject meth repeatedly in an effort to chase after and maintain its powerful euphoria and other effects.

Take note of your loved one’s behavior to see if their sudden bursts of energy and euphoria are quickly followed by irritability, mood swings, and other negative effects. If so, they may be using meth intravenously. 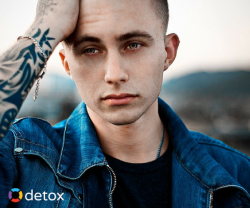 IV meth abuse puts you at risk for addiction and other dangerous diseases.

Meth is dangerous and deadly because it speeds up the central nervous system and puts undue stress on the heart and other organs. IV meth users often face an even higher number of risks due to the way needles allow for the easy transmission of deadly infections and diseases. IV meth abuse is associated with countless health consequences — many of which can lead to death when left untreated.

Here are common harms associated with IV meth use.

People who inject meth at the same site repeatedly can experience collapsed veins, which is when veins become blocked due to swelling and irritation, and eventually collapse. Collapsed veins can lead to poor circulation and increase your risk for stroke, kidney disease, cyanosis of the limbs, and brain and heart problems.

IV meth users will often develop sores and abscesses at injection sites due to reasons such as having excess dirt and bacteria on their skin, the leakage of meth out of veins during the injection process, and the injection of meth into the layer of fat under the skin instead of into the bloodstream — a process known as skin popping. Sores can also be caused by tissue death or necrosis on behalf of the toxic chemicals and ingredients used to make meth.

IV meth users who experience problems with collapsed veins and other vein injuries may develop blood clots or deep vein thrombosis. DVT increases the risk for a pulmonary embolism, which is when a blood clot travels through the bloodstream to block a lung artery. This in itself can lead to heart failure and death.

Common symptoms of blood clots include sudden swelling of the arm or leg, enlarged veins, pain when standing or walking, and skin that looks red or blue. Signs that a blood clot may be causing a PE include increased heart rate, shortness of breath, chest pain, and coughing up blood. If you or a loved one is experiencing any of these signs or symptoms, seek medical help immediately to lower your risk for fatality.

IV meth users tend to practice poor hygiene and share needles with one another — behaviors that create a breeding ground for serious, life-threatening infections. Existing infections at injection sites and poor injecting techniques can also lead to the development of more serious infections. Many of these infections cannot be fully cured, and often require intensive treatment.

Roughly one in 10 new HIV diagnoses in the U.S. are caused by injecting drugs like meth, or by a combination of injection drug use and sexual contact between males. IV meth use can sometimes indirectly lead to the transmission of HIV by increasing sex drive and risky behavior among those who are high.

IV meth use accelerates the rate at which you become high, and produces short-lived effects that are quickly followed by a “crash.” Many IV meth users will inject repeated doses of meth in an effort to prolong its effects and avoid negative effects of anxiety, depression, and fatigue. However, using meth intravenously increases the rate at which a person becomes physically dependent on meth. Evidence suggests that people who inject meth suffer from a more severe level of meth dependence than people who use the drug in other ways.

Meth caused 7,663 drug overdose deaths in the U.S. in 2016, and led to 102,961 emergency department visits in 2011. Using high amounts of meth can cause an overdose, which may include complications such as hyperthermia and convulsions. A meth overdose can also be caused by using extremely toxic batches of meth laced with dangerous chemicals like insecticide, or by using meth with heroin and other substances at the same time.

A meth overdose can lead to a heart attack, stroke, and organ failure caused by hyperthermia or overheating. All these events can lead to death. Contact emergency medical services immediately if you are witnessing someone who may be experiencing a meth overdose.

Knowing how to recognize common signs of meth addiction can help you determine whether it’s time for you or a loved one to seek treatment. People who suffer from addiction will usually start behaving differently as they start prioritizing meth above other important responsibilities.

Here are common symptoms and signs of meth addiction:

If you or your loved one is exhibiting any of the above signs of IV meth addiction, it’s time to get help in the form of professional addiction treatment. Getting help for meth addiction can improve your physical and mental health, and jumpstart your body’s healing process so you can start recovering from the long-term effects of meth use.

Getting Help for IV Meth Addiction

IV meth addiction can be safely treated using drug detox and therapy. These treatments help you overcome addiction as a whole both physically and mentally, as well as any co-occurring disorders that may be driving your addiction. Getting help for meth addiction can give you the mental clarity, confidence, and empowerment needed to resume everyday life as a healthier, addiction-free individual.

A meth detox helps you overcome physical dependence on meth, and allows you to withdraw from meth while under 24/7 medical care and supervision. A meth detox is usually conducted as an inpatient medical detox, and may involve the use of medications that relieve certain withdrawal symptoms. Meth withdrawal symptoms last an average of seven to 10 days, and include fatigue, anxiety, depression, psychosis, and drug cravings.

A meth detox can also be conducted as a natural or holistic detox, which use alternative evidence-based therapies effective at relieving withdrawal symptoms. Acupuncture, daily massage therapy, and nutrition therapy are just some holistic therapies that can help you recover from meth dependence without the use of medications.

Meth detox treatments are available at dedicated drug detox centers and at addiction rehab centers that also offer counseling, support groups, and other therapies. Ninety-day treatment programs are recommended for those recovering from IV meth addiction, since 90-day programs use therapy to treat lingering withdrawal symptoms such as depression and suicidal tendencies. Withdrawal symptoms that last beyond a meth detox are known as post-acute withdrawal syndrome, and can be fully treated through extended care programs at many addiction treatment centers.

Find the nearest meth treatment center using our drug detox center directory, or call our 24/7 confidential helpline at 800-483-2193(Who Answers?) to discuss your treatment needs with an addiction counselor. Detox.com will perform a free insurance verification check and get you quickly on the road to recovery with an accredited and reliable drug detox center.