Powdered Confidence: Do the Short-Term Side Effects of Cocaine Cause Addiction?

More than 16% of U.S. adults over the age of 26 have used cocaine at least once in their lifetime. Cocaine is an illicit stimulant that produces short-term effects of high energy, talkativeness, alertness, and euphoria. Many cocaine users say they use the drug to boost memory and concentration, and to perform tasks more quickly and efficiently. While the side effects of cocaine may be appealing to some, using the drug regularly can lead to serious life problems and negative outcomes — including the risk for a deadly addiction.

Why are cocaine use rates rising in the U.S., and why is the drug still popular among Americans? Here’s a close look at the driving factors behind cocaine addiction, and signs of cocaine abuse that may indicate you or a loved one needs help fighting addiction.

How Popular is Cocaine Today?

Today, an estimated 1.9 million Americans over the age of 12 are regular cocaine users, while roughly 913,000 Americans struggle with cocaine addiction. Between 2006 and 2010, rates of cocaine use in the U.S. declined by 50% and remained relatively stable for a number of years. But recent findings suggest that cocaine use is once again on the rise, and may be re-emerging as a serious public health concern.

The number of cocaine overdose deaths in the U.S. increased 1.6-fold from 2010 to 2015, and was linked to over 10,600 overdose deaths in 2016. The DEA reports that cocaine supply levels in the U.S. are at their highest since 2007 on behalf of increased cocaine production in Colombia. In 2016, Colombian cocaine accounted for roughly 92% of all cocaine seizures in the U.S., with 80% of those seizures taking place in Florida, Texas, and California.

Officials are saying the U.S. opioid crisis is also partly to blame for the increase in nationwide cocaine use, since new rules and restrictions surrounding the prescribing of painkillers is making it more difficult for people to obtain opioids. Many heroin and painkiller users are switching to cocaine in areas where the drug is easier and cheaper to obtain. Unfortunately, cocaine overdose deaths are also on the rise since many dealers are now mixing or cutting fentanyl into their drug supplies.

Fentanyl is a synthetic opioid between 30 and 50 times stronger than heroin, and also far less costly than both heroin and cocaine — making this drug an ideal ingredient for dealers who want to stretch out their cocaine supply and offer customers a more powerful high. But some batches of fentanyl are so strong that just one tiny grain can cause any drug user to suffer an instant overdose — including those with high tolerance levels.

Since cocaine is illicit, unregulated, and may contain traces of more potent deadly drugs like fentanyl, anyone who uses cocaine even just one time is at risk for suffering an overdose.

Do the Short-Term Side Effects of Cocaine Cause Addiction?

Cocaine is a stimulant — meaning the drug stimulates the central nervous system to increase energy, alertness, and attention. Other examples of stimulants are caffeine, nicotine, methamphetamine, and drugs used to treat ADHD like Adderall and Ritalin. The effects of cocaine normally begin immediately after use, and can last anywhere between a few minutes to one hour.

Common short-term side effects of cocaine use:

Contact Detox.com now to find cocaine detox centers near you!

Many of the “favorable” side effects of cocaine like euphoria and increased confidence can be achieved with small amounts of the drug, but those who use cocaine in large amounts may experience bizarre, erratic, and violent behavior, along with irritability, anxiety, and paranoia. Some users may even be subject to muscle twitches, tremors, and vertigo — including those who use small amounts.

People who use cocaine generally experience powerful bursts of energy and motivation, inflated ego, and dramatic increases in self-confidence. Some cocaine users report that the drug makes them feel as though they’re the life of the party and more popular due to the way the stimulant increases sociability. It’s these very effects that make cocaine so appealing and addictive to many — especially those who rely on the drug to feel more confident and sociable, or to excel at school or work.

The euphoric high produced by cocaine is often short-lived and wears off within an hour. After experiencing feelings of happiness, excitement, and high energy, cocaine users experience a “crash” marked by mood swings, sadness, extreme fatigue, and strong drug cravings. These negative side effects can contrast sharply with the initial effects produced by cocaine, and influence people to continue using the drug just to keep bad symptoms at bay.

But using small amounts of cocaine here and there can cause people to become tolerant to the drug and require higher amounts to achieve the drug’s effects. SAMHSA reports that with continued, escalated use of cocaine, users can become tolerant to the drug’s positive effects, while negative effects like depression, nerve pain, and exhaustion can intensify. Tolerance can quickly lead to physical dependence, which can then lead to a full-blown addiction that opens the door to more serious problems revolving around health, finances, career, education, and relationships.

Who is Most Susceptible to Cocaine Addiction? 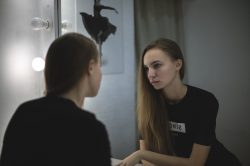 Female cocaine users are more susceptible to addiction than men.

Cocaine addiction can be caused by certain biological and/or environmental risk factors. The higher the number of risk factors a person meets for addiction, the higher the likelihood that person will suffer from addiction. Common risk factors for addiction include genetics, availability of drugs at home or school, poor social skills, lack of parental supervision, and the presence of a mental health disorder.

Evidence shows that people between the ages of 18 and 25 are more than twice as likely to use cocaine compared to other adults, and that men are twice as likely to use cocaine than women. However, women tend to be more susceptible to cocaine addiction due to the way the drug interferes with hormones that only exist in women. Other people who may be highly susceptible to cocaine addiction include athletes, business professionals, students, and others who believe that cocaine can help accelerate and enhance performance.

Here are people shown to be most susceptible to cocaine addiction.

Any Woman Who Uses Cocaine

Evidence shows that women can get addicted to cocaine more quickly than men due to the way the drug’s effects are magnified by two estrogen receptors not present in men. Women tend to experience greater euphoria with cocaine use than men, and intense highs that quickly lead to dependence and addiction. Data also shows that women may be particularly sensitive to the side effects of cocaine when using the drug for up to two weeks following menstruation.

Data shows that roughly 30% of U.S. college students use prescription stimulants like Adderall and Ritalin for non-medical reasons because they believe these “study drugs” will help them excel in school. Some kids who abuse and become tolerant to these stimulants end up switching to cocaine — a stronger stimulant that produces more powerful effects. College students tend to abuse stimulants to stay awake and improve memory and concentration.

Lawyers, doctors, nurses, athletes, and entertainers are examples of some professions shown to face higher rates of substance abuse. Some professionals use cocaine for the same reasons as most college students — to benefit from increased alertness, concentration, and energy. People who work long hours may use cocaine to stay awake, while those in task-oriented professions may use the drug to get more things done in a shorter time.

Some professional athletes try using cocaine to boost their sports performance — believing that the drug makes them stronger and more alert. But cocaine increases heart rate, blood pressure, and body temperature, and has toxic effects on the heart that increase the risk for heart attack, stroke, and heart failure.

Reports show that people with mental health disorders like depression and anxiety generally face higher rates of substance abuse than those without mental health disorders. Many of these individuals use drugs like cocaine to relieve their symptoms, or to improve their mood. For instance, people who suffer from social anxiety disorder may use cocaine to boost their self-esteem, and become more talkative and social at parties and events.

The presence of addiction and a mental illness at the same time is known as co-occurring disorders, or a dual diagnosis. Mental health disorders can often lead to addiction, while drug abuse can alter brain activity in ways that make people more susceptible to mental illnesses like schizophrenia and bipolar disorder.

Cocaine abuse symptoms can be physical, psychological, and behavioral in nature. People addicted to cocaine will usually display brief bouts of excitability and extreme happiness, then experience a crash marked by irritability, restlessness, and anxiety.

People who suffer from addiction will usually prioritize drug use above all other important responsibilities, including family, school, and work. If your loved one has recently experienced lifestyle or behavioral changes that seem odd or uncharacteristic, it’s possible they may need help in the form of professional addiction treatment.

Cocaine withdrawal can be difficult to get through on your own without help, since symptoms like drug cravings, depression, and suicidal thoughts can increase your risk for relapse, overdose, and death. Most cocaine withdrawal symptoms are the opposite of the short-term side effects of cocaine, and include increased appetite, slower thinking, loss of sexual libido, and difficulty concentrating. However, all cocaine abuse symptoms can be effectively treated using detox and therapy.

A cocaine detox is usually conducted as a medical detox, which allows you to withdraw from cocaine at an inpatient rehab center while under the 24/7 medical supervision of licensed nurses and doctors. Cocaine is a fast-acting drug that usually clears from your system within 24 and 72 hours with a medical detox. Your doctor may prescribe medications that treat certain cocaine withdrawal symptoms, such as gabapentin to reduce the risk for seizures.

Cocaine detox is often followed by therapy so you can be treated for the root cause of your addiction. Cognitive-behavioral therapy helps you identify and overcome negative thoughts and behaviors that influenced your cocaine use, while group therapy allows you to speak openly about cocaine addiction and bond with peers who understand what you’re going through.

If you need help fighting cocaine addiction, use our detox center directory to explore nearby treatment centers in your city and state. Or, call our 24/7 confidential helpline at 800-483-2193(Who Answers?) to speak with an addiction counselor who can discuss your treatment options and help you find the nearest drug detox center.