In recent months China has been under fire for fueling the U.S. opioid epidemic by allowing companies to manufacture and distribute mass amounts of a dangerous opioid called fentanyl. But at a recent press conference attended by U.S. and Chinese government officials, China pointed out that in order to stop the epidemic, the U.S. must stop blaming China, and reduce the domestic need for opioids by strengthening its drug awareness and education campaigns.

Shifting the Blame from China to the U.S. 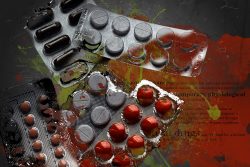 In February 2017, a report from the Congressional U.S.-China Economic and Security Review Commission labeled China as the primary source of fentanyl entering the U.S. In November, President Trump met with Chinese president Xi Jinping to discuss solutions that could bring the opioid crisis to an end. The two leaders agreed to work together on fighting narcotic crimes surrounding fentanyl and opioids, including stepping up Internet patrol to restrict online fentanyl purchases, and destroying Chinese fentanyl labs.

At Thursday’s press conference, Chinese officials told the U.S. that America’s light attitude towards drugs and the legalization of marijuana is having a negative effect on the way Americans are viewing drugs. Yu Haibin from the China National Narcotics Control Commission said that the U.S. is failing to educate its people properly on drugs and their effects, and that the country should strengthen its educational and publicity campaigns to cut down on the demand for opioids. China also said that the U.S. must share more intelligence and lab data so China can continue detecting and shutting down fentanyl labs and suppliers.

A Look at Fentanyl Production in China

Fentanyl is between 50 and 100 times stronger than morphine, and caused approximately 20,000 overdose deaths in the U.S. in 2016. While fentanyl is available as a prescription drug in the U.S., the majority of fentanyl overdose deaths involve synthetic fentanyl, or fentanyl analogues from China. Fentanyl analogues contain a cocktail of dangerous chemicals and substances that can trigger an overdose even in those tolerant to high doses of this synthetic opioid.

Over the last several months, the joint China-U.S. effort has led to the seizure of 10 pounds of fentanyl and over 330 pounds of drug ingredients used to make fentanyl and methamphetamine. China also recently added new fentanyl ingredients to its list of banned substances in an effort to minimize the opioid crisis. However, Chinese officials have revealed that chemists are now producing new versions of fentanyl despite the banning of 23 different types of fentanyl analogues.

Most fentanyl from China is shipped to the U.S. via international mail services. Americans with access to the Deep Web can purchase fentanyl and have it shipped to their homes, or buy the drug in large amounts for distribution on U.S. streets. Carfentanil, Pink, and sufentanil are just some names of common fentanyl analogues making their way into the U.S. from China.

People who use fentanyl are putting themselves at high risk for a drug overdose, since the purity and strength of each batch of fentanyl varies greatly from the next. Many times, emergency medical responders are unable to use revive fentanyl overdose victims using opioid overdose reversal drugs like naloxone and Narcan. Fentanyl has become one of the leading drivers of opioid overdose deaths, and is one of the deadliest drugs currently circulating U.S. streets.

The best way to prevent a fentanyl overdose is to overcome physical dependence on fentanyl and other opioids at an opioid detox center. An opioid detox center can use medications like methadone and buprenorphine to help patients safely and comfortably withdraw from fentanyl and opioids without suffering symptoms that would otherwise cause pain and discomfort. A medical detox and medication-assisted treatment are two of the most effective and widely used detox treatments for fentanyl addiction.

If you or a loved one needs help fighting opioid addiction, call our 24/7 confidential helpline immediately at 800-483-2193(Who Answers?). Our experienced drug abuse counselors will help you find the nearest opioid detox center ready to help you overcome addiction to fentanyl, heroin, and all other opioids.