The opioid crisis was declared a public health emergency on Oct 26, but the 90-day declaration is set to expire on Tuesday, Jan 23. A number of state senators recently sent a letter to President Trump asking for the renewal of the declaration, since opioid overdoses are continuing to kill Americans at a rate of more than 90 people per day. Trump has yet to respond to the letter, which was sent early on Jan 19.

What Happens if the Opioid Emergency is Renewed? 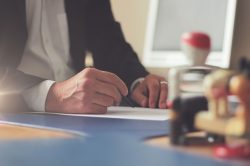 Lawmakers sent a letter to the president requesting he free up more resources to combat the opioid epidemic.

When the opioid crisis was initially declared a public health emergency in October, Trump promised to launch awareness campaigns surrounding the dangers of opioid use, and to hire healthcare workers to aid in reducing the epidemic. Trump also announced plans to train federal prescribers of opioids on safer prescribing practices, and to work with China to block shipments of fentanyl from entering the U.S.

If the declaration for the opioid emergency is renewed, government agencies will continue working on Trump’s plans in place to curb the epidemic. In their letter to the President, senators asked Trump once again to free up federal resources that can be used toward expanding access to opioid addiction treatment, funding overdose reversal treatments, and strengthening law enforcement to cut down on illegal prescribing practices and the amount of illicit opioids circulating U.S. streets.

The National Governors Association also recently approached Trump for more help with resolving the opioid crisis. At a recent meeting discussing the upcoming expiration of the public health emergency, governors asked Trump to require that drug prescribers receive training on drug use disorders and register to use their state’s prescription drug monitoring databases. The governors also asked for increased access to naloxone, and for Medicaid to cover methadone maintenance therapy for older adults.

Despite Trump’s recent agreements with China to block fentanyl shipments, the governors are asking the Administration to do more to prevent fentanyl from entering the U.S. At this time, Trump has not provided the governors with definitive answers surrounding resolving the epidemic.

How to Get Help for Opioid Addiction Immediately

Opioid overdoses killed more than 53,000 Americans in 2016, and continue to kill nearly 100 Americans every day. Anyone who uses opioids for any reason is at risk for dependence and addiction — including those who use the drugs for legitimate medical reasons and have valid prescriptions. If you think you might be addicted to opioids, you can safely get clean at a drug detox center.

Opiate detox centers treat opioid dependence using a medical detox, rapid detox, medically supervised detox, or medication-assisted treatment — also known as MAT. A medical detox and MAT are among the safest detox methods for opioid dependence, since these treatments involve the use of medications like methadone and buprenorphine that can relieve opioid withdrawal symptoms. Opiate detox treatments are overseen by medical professionals who monitor your withdrawal, relieve your symptoms, and teach you ways to overcome cravings and urges to use opioids.

If you need help fighting opioid addiction, call our 24/7 confidential helpline right away at 800-483-2193(Who Answers?). Our understanding addiction counselors will discuss all your treatment options, and help you find a nearby opiate detox center devoted to helping you experience a safe drug detox from opioids.