Nicotine Use Rising Among Americans with Drug Use Disorders

Cigarette smoking rates in the U.S. have been declining for several decades, but new evidence shows that smoking has been steadily on the rise among Americans with substance use disorders since 2002. This new finding may urge alcohol and drug treatment centers to place more emphasis on smoking cessation programs for patients who also struggle with nicotine addiction.

The Link Between Cigarette Smoking and Addiction 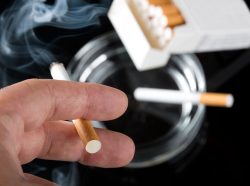 Individuals who struggle with substance use disorders are five times more likely to smoke cigarettes than the general population, according to the new study published in the January issue of Addiction. Researchers analyzed data from over 725,000 Americans between 2002 and 2014, and found that 56% of those with drug use disorders reported smoking within the past month, compared to 18% of those without drug use disorders.

The study authors concluded that Americans addicted to substances other than marijuana are 7.5 times more likely to smoke cigarettes than the rest of the population. Senior author Renee Goodwin, PhD suggests that new public health strategies be developed to help those with drug use disorders quit smoking while in rehab, and that treatment centers should start implementing smoking cessation programs to reduce rates of nicotine use and help patients recover more quickly from addiction.

The Pros and Cons of Smoking During Drug Detox

Previous studies have shown that smoking cigarettes in drug rehab may help with recovery in that it distracts patients from thinking about alcohol and drug use. But many addiction treatment professionals argue that replacing drugs and alcohol with nicotine is replacing one addiction with another, and that nicotine use can hinder a patient’s recovery.

Smoking inhibits blood flow and circulation, and can weaken a person’s immune system. Smoking during recovery from addiction can prolong the body’s healing process, and interfere with some drug and alcohol detox treatments. Cigarette smoking can even worsen existing health problems like respiratory disease and heart disease, and interfere with healthy lifestyle activities like exercise that patients can implement in their lives as part of addiction recovery.

Separate studies have shown that nicotine is a gateway drug for cocaine and other dangerous stimulants. A recent national survey revealed that over 90% of adult cocaine users started smoking cigarettes before turning to cocaine. But scientists say that smoking cessation programs can often reduce the risk for cocaine use disorders, and addiction to other illicit substances.

Getting Help for Addiction and Drug Use Disorders

Nicotine is one of the most addictive substances in the world, and may lead to relapse in addiction treatment patients who start smoking to cope with overcoming addiction. Fortunately, many drug treatment centers also offer nicotine detox and smoking cessation programs to help patients who want to achieve improved overall health after quitting drugs and alcohol.

Substance use disorders are often treated using drug detox and therapy. Detox helps patients overcome dependency on alcohol and drugs — including nicotine — while therapy teaches patients the skills they need to stay sober and manage cravings. Cognitive-behavioral therapy is a widely used therapy that can help patients identify and overcome triggers that influence them to use drugs and nicotine.

If you or someone you love needs help overcoming addiction to nicotine, drugs, alcohol, or any other substance, call our 24/7 confidential helpline at 800-483-2193(Who Answers?). Our caring addiction specialists will discuss all your treatment options, and help you find the nearest drug detox centers ready to guide you toward sobriety, improved health, and a more fulfilling drug-free lifestyle.