Binge drinking and alcohol use rates are often higher among U.S. college and university students compared to their non-college peers. But a new analysis shows that binge drinking rates among college kids are significantly higher than usual during the annual NCAA college basketball tournament that takes place for most of March. Students who attend schools competing in March Madness may face higher crime rates, lower grades, and higher rates of alcohol addiction. 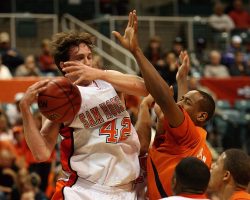 Highlights from the binge drinking analysis reveal that binge drinking rates increase by 30% in schools that participate in the NCAA Tournament for March Madness, and that drunk driving rates increase by 9% among male students. Researchers used data from the Harvard School of Public Health College Alcohol Study to examine alcohol consumption rates before, during, and after 43 NCAA Division I institutions in 1993, 1997, 1999, and 2001. This data was compared to college drinking rates at other non-tournament schools during the same seasons.

Additionally, the study found that roughly one in three students over the age of 21 tend to binge drink more when their school’s team competes in March Madness. One in every four college students under the age of 21 reported binge drinking an extra time when their team played. When asked about drunk driving, 10% of students revealed they were more likely to drive under the influence or ride with someone under the influence following March Madness events.

Binge drinking in college can increase the risk for fatal accidents, sexual assault, academic problems, and alcohol use disorder. Every year, an estimated 1,825 college students between the ages of 18 and 24 die from alcohol-related injuries and car accidents, while another 97,000 students in the same age group report alcohol-related rape or sexual assault. Additionally, one in every four college students report that drinking affects their academic performance in terms of missing classes, receiving lower grades, and performing poorly on exams.

College students tend to binge drink and abuse alcohol for reasons such as fitting in with peers, having easy access to alcohol, and coping with stress surrounding academic performance. But in addition to increasing the risk for crime, violence, and lower grades, binge drinking can lead to serious lifelong problems with alcohol addiction, along with alcohol poisoning and death. Fortunately, treatments are available to help college students stop drinking, and shift their focus back to their schoolwork.

Tips for Staying Safe on Campus During March Madness

If you plan on consuming alcohol during college sporting events and March Madness, take necessary precautions to make sure you stay safe to avoid binge drinking and alcohol intoxication.

Tips that can help you stay safe during March Madness:

If you or a loved one continues to struggle with alcohol abuse or addiction, call our 24/7 confidential helpline at 800-483-2193(Who Answers?) to discuss your treatment options with an addiction counselor. We’ll help you find a nearby alcohol detox center ready to help you become healthier, sober, and addiction-free.