On March 15, 2018, a Florida home in the Little Havana neighborhood of Miami was torn down. This home on SW 3rd Street and 10th Avenue had multiple drug ties, so it was demolished in an effort to minimize the drug problems in the community. The home was also considered an “eyesore” by many, as it was dilapidated and not well kept. The inside was covered in gang-related graffiti, and officials say drug pushers often made deals and squatted within.

Tearing down the home was a part of the Safe City Initiative, the idea of which is to “take homes like these, destroy them, and make sure no criminal activity can ever emanate from this structure again,” according to Emilio Gonzalez, City Manager. This is the ninth structure that has been torn down by the city as part of this initiative, and moving forward, the city has the opportunity to decide what to build in these new areas to enrich the community instead of adding to its problems. 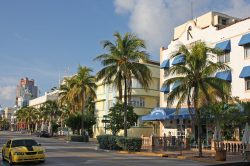 According to a 2014 study by the National Institute on Drug Abuse, Miami, as well as other areas in South Florida, are experiencing a serious heroin outbreak. In addition, there was a 300 percent increase in the use of the synthetic cathinone drug methylone. This drug was being sold as molly, which is one of the street names for ecstasy or methylenedioxymethamphetamine. Unfortunately, a number of Miami’s drug problems have only increased since this study, especially those associated with heroin.

People are now becoming addicted to heroin in greater numbers because of the opioid epidemic. Many individuals become dependent on opioid drugs like oxycodone and hydrocodone and require stronger substances to cause the same effects later. This leads to heroin abuse, and more people experience deadly overdoses as a result. Heroin is an extremely potent drug, and unfortunately, many are even mixing their heroin with fentanyl, an even stronger synthetic opioid that is killing people in droves (Centers for Disease Control and Prevention).

There are many reasons you or your loved one suffering from heroin abuse and addiction requires detox and rehab treatment.

Get Help for Heroin Addiction Now

Without help, it is very difficult to recover from this deadly disorder. This is why we recommend that you call 800-483-2193(Who Answers?) to speak with a treatment advisor and learn about your recovery options today.