Pleasures of the Fur

They don fuzzy animal suits, gather at conventions, and connect online to forge relationships and share poetry and artwork. Though they come from all walks of life and hail from around the world, they share at least one commonality: They identify with anthropomorphic animals. For furries, this is neither a hobby nor a fetish—it’s simply a way of life.

Intrigued, we decided to take a closer look at the furry subculture. Using data from an annual survey conducted by [adjective][species] from 2009 until now, we explored who furries are, where they live, which species they prefer to emulate, the taboo topic of zoophilia, and more. Read on for an insider’s view of the furry fandom.

Who Are These Furries? 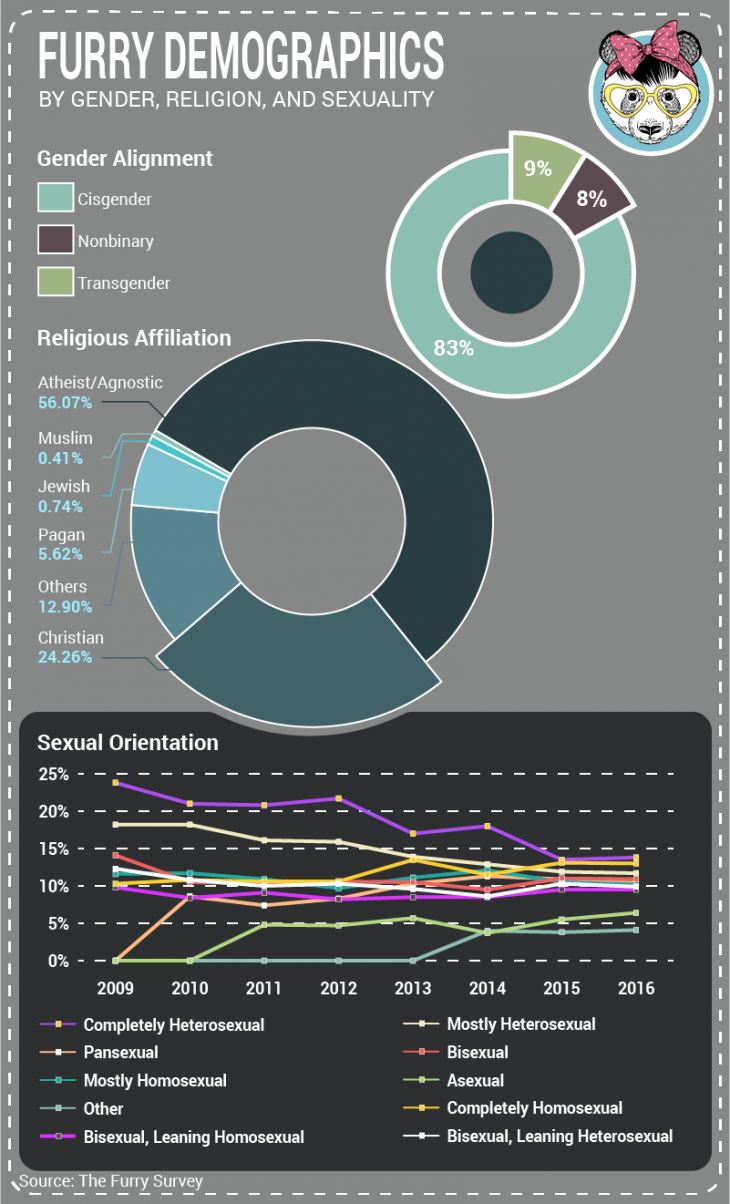 They may identify with wolves or raccoons or bears, but what kind of people are inside these furry suits and behind these anthropomorphic avatars? For starters, the lion’s share of furries are cisgender, meaning they identify with the gender they were born with. Only around 9 percent identify as transgender, while about 8 percent say their gender is complicated.

As for sexual orientation, no one group dominates the furries. Heterosexual people comprise the largest group at around 14 percent—though that percentage has dwindled since 2009. Another 13 percent are homosexual.

Other furries straddle the lines, with fairly equal numbers comprising groups identifying as mostly heterosexual, mostly homosexual, bisexual leaning heterosexual, and bisexual leaning homosexual. Nearly 11 percent are pansexual, which means their sexual attraction is not limited to people of a certain gender identity or sexual orientation. Only 5 percent of furries are asexual.

Just over half of furries are agnostic or atheist. Interestingly, nearly one-quarter of them are Christians, while another 13 percent practice a different religion.

A hallmark of the furry fandom is its spirit of inclusivity. Regardless of gender, sexual orientation, or religion, all are welcome.  For those accustomed to hiding key parts of their identity, joining an accepting subculture can be a relief.

Furries and Sex: How Much Does it Matter? 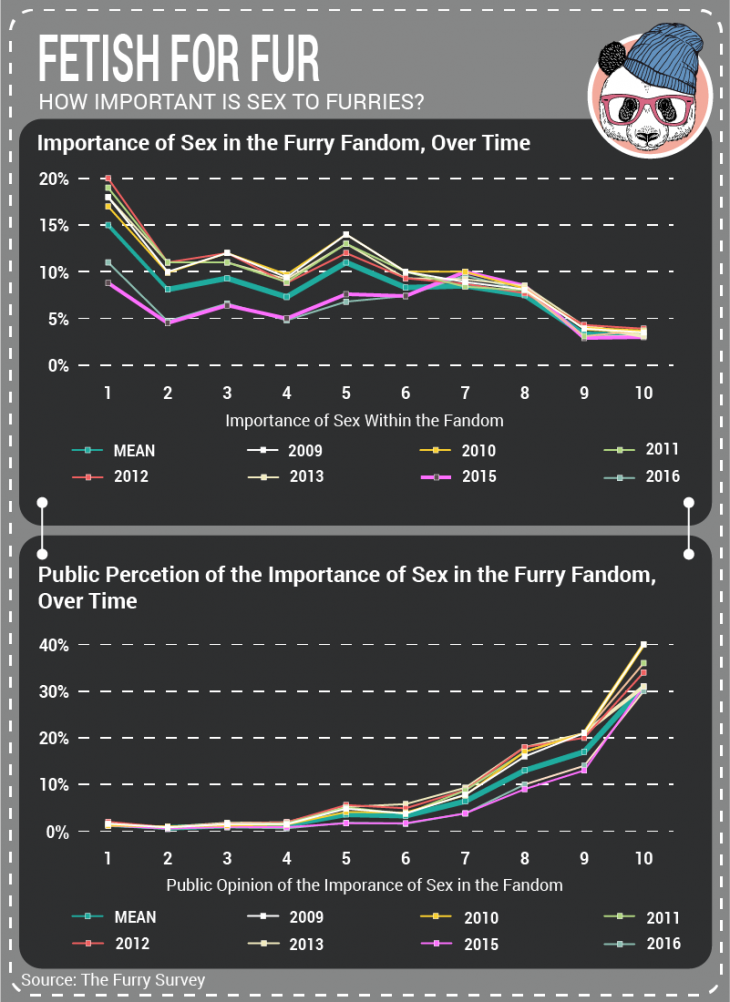 While outsiders may perceive furries as a group focused on sexuality, that’s not necessarily the case. The graph above conveys furries’ answers, between 2009 and today, to two important questions: On a scale of 1 to 10, how important is sex to furries themselves? And how do furries think that the public perceives furries’ sexuality?

For furries themselves, sex is not everything. Though fluctuations have occurred over the past several years, let’s take a look at the mean: Only around 3 percent apiece rank sex 9 or 10 on a scale of importance—and around 15 percent rated sex a 1 in importance. Approximately 9 percent gave it a 3, while around 11 percent said 5.

However, it seems furries strongly believe that the public thinks donning an animal costume is synonymous with a strong interest in sex. Around 31 percent of furries think the public would rank the importance of sex to furries a 10 on the 10-point scale. Another 17 percent said 8, while 13 percent said 9. Only around 1 percent apiece of furries felt the public would rate the importance of sex to furries a 1, 2, or 3.

Furries Across the United States 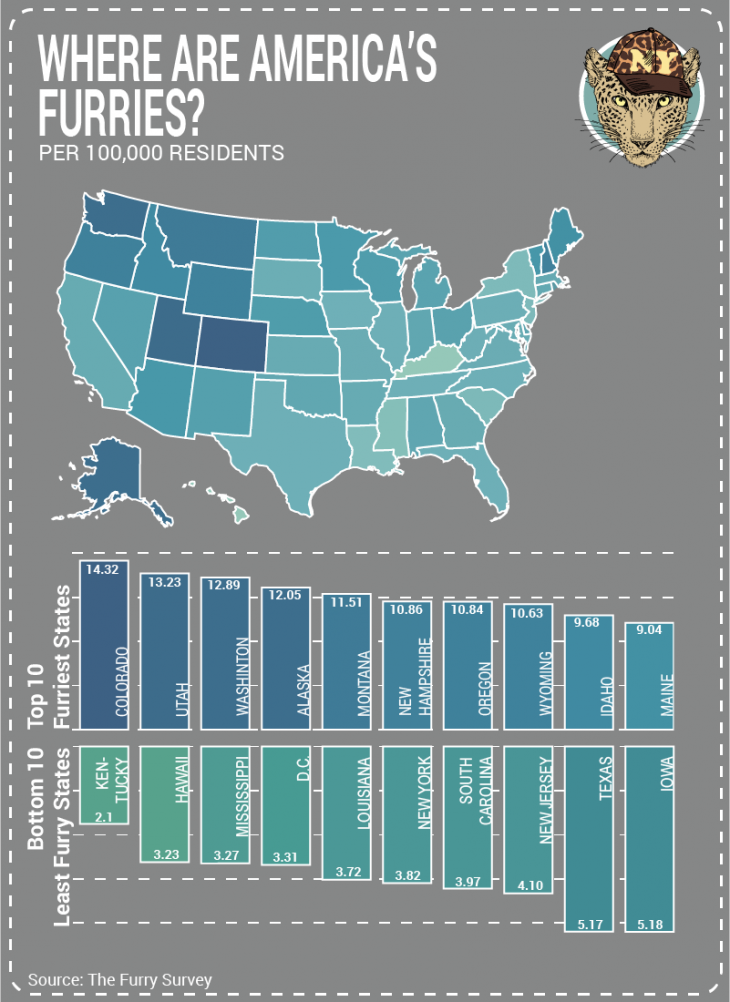 A single glance at the map immediately reveals one piece of information: Based on population, the Northwest and West are heavier on the furries. Which states in particular are home to the highest percentage of furries? Colorado comes out on top, with just over 14 furries per 100,000 residents. Utah claims second place with just over 13, while Washington is in third with just under 13.

On the other hand, Kentucky is the least likely home for furries, with only around 2 per 100,000 residents. Hawaii is second-lowest, with just over 3 furries per 100,000 residents, and Mississippi places third. However, just as with any subculture, no truly definitive map exists.

Furries With an Animal Fetish 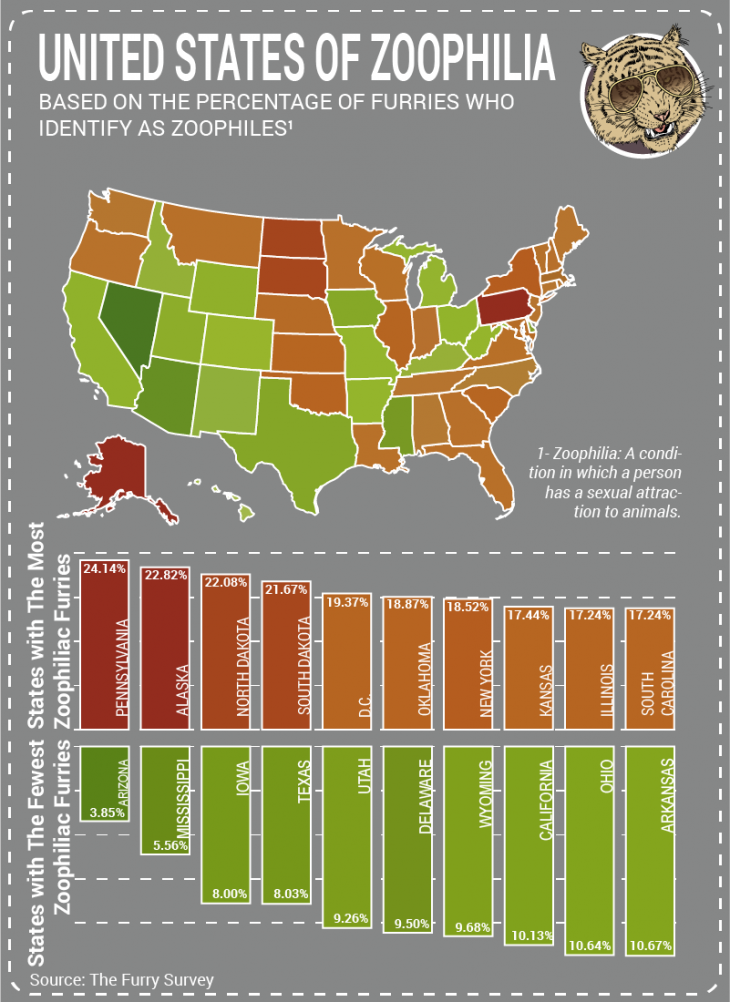 Defined as an attraction to actual animals, zoophilia is definitely not the same thing as feeling attracted to a person wearing an animal suit. Pennsylvania is home to the highest percentage of furries who identify as zoophiliac. Next comes Alaska, North Dakota, South Dakota, and D.C. Arizona has the lowest percentage of furries who are zoophiliac, followed by Mississippi, Iowa, and Texas.

It’s important to note that these percentages reflect those with an attraction—and does not mean people have acted on their urges. In fact, for many furries, the lifestyle does not reflect any sexual preferences, let alone a desire for real animals. “Furry is not a fetish, it is a hobby that some members fetishize,” one furry wrote on an online furry message board. “I have no sexual interest in furry and I know I am not alone on that.”

The subject of zoophilia sparks debates in the community. “The only difference between a furry character and a human are the animal facial features and animal bodily features,” someone wrote on the online message board. “Last time I checked when someone was attracted to the features of an animal that made them a zoophile.” Many of those who responded vehemently disagreed.“[M]ost furries don’t want to have sex with real, feral animals who are incapable of any form of consent,” one person wrote.

The Species that Furries Favor 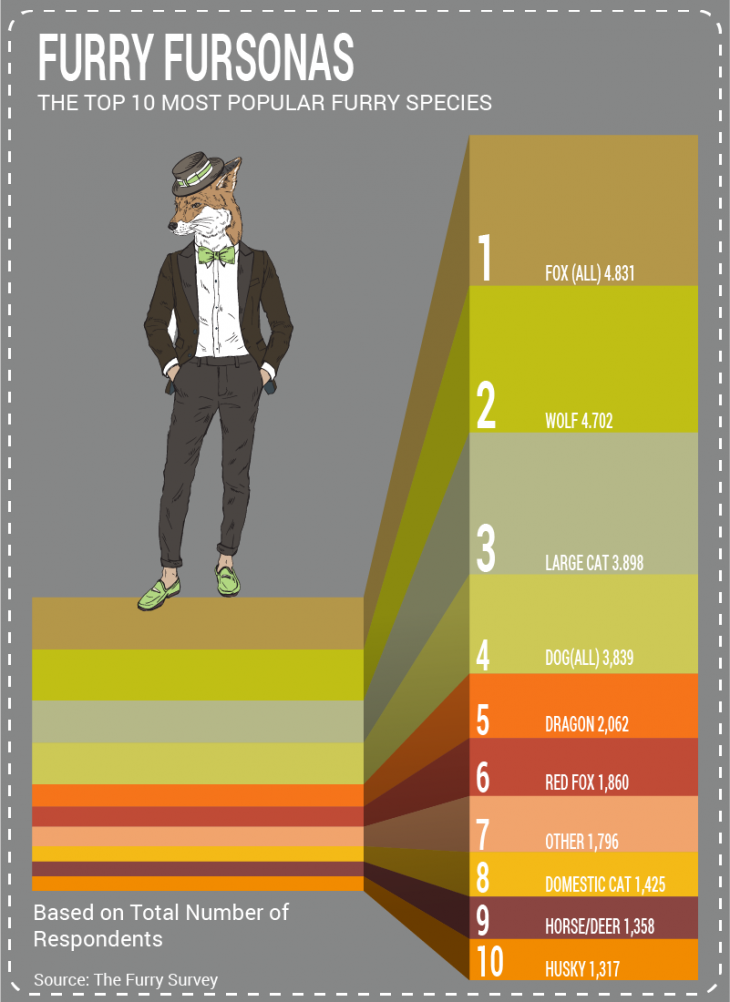 From monkeys to dogs, cats to bears, the sky’s the limit for furries choosing a “fursona.” But not all species are created equal, and some prove much more popular than others. Among furries, the fox is decidedly top dog—with the wolf hot on its heels. Large cats, dogs, and dragons are also among the most popular animals to emulate. 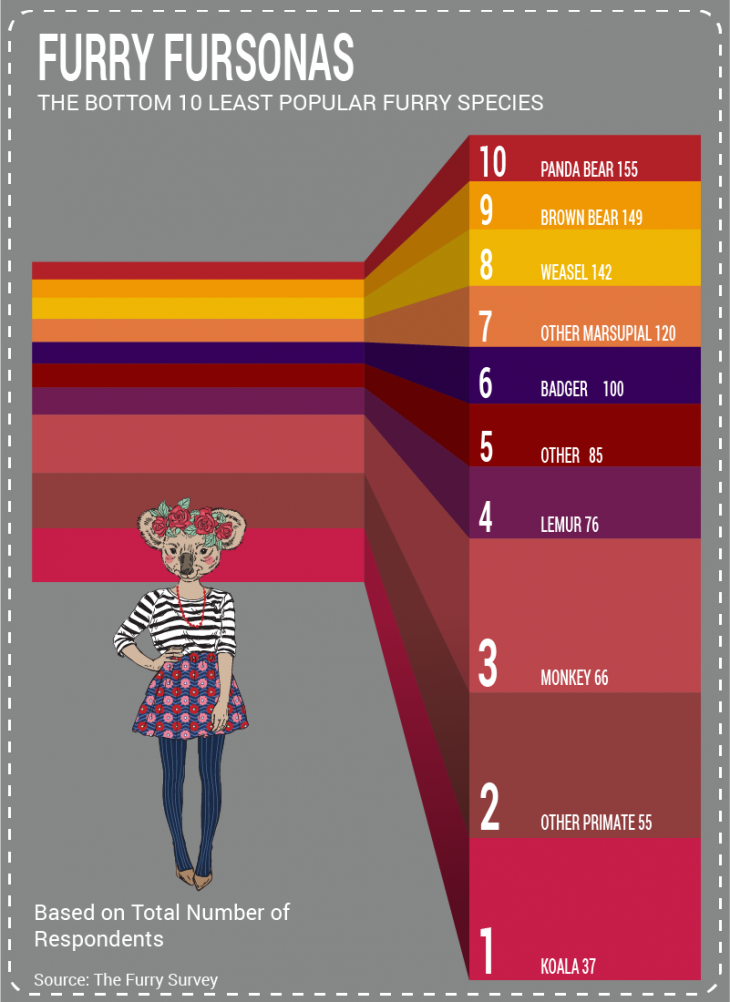 The least popular species for furries is the koala. Too small? Too cute? One can only speculate. Primates also prove unpopular: Monkeys, lemurs, and other primates fall quite low on the list. Many believe the lack of furry primates stems from how closely they resemble humans: “[I] don’t think the majority of the fandom is too interested in very human-looking animals,” one commenter wrote. Badgers and weasels don’t hold much allure for furries either.

Why do furries take on particular fursonas? For many, the decision simply involves choosing an animal with traits they either identify with or aspire to: bravery, strength, pride, and so on. Others choose a species they have always admired (after all, most children have a favorite animal). Some furries choose an animal they think is unique, while others strive to make their chosen species different through either by adding a qualifier (wolf becomes timber wolf) or inventing a hybrid species (such as a deer-wolf).

A World of Fantasy

Furries are not alone in their desire for an alter ego. From a young age, many children enjoy playing dress-up. As adults, some follow their dreams in a way others may not understand: Some people want to be mermaids; others are fascinated with faeries. Some engage in puppy play; others nurture realistic dolls as though they are human children.

The premise for furries and many subcultures is fantasy: People can create boundary-free versions of themselves and spend at least part of their time in a world that delights them. When it comes down to it, is it really much stranger than the hordes of adults who adore Harry Potter, Star Wars, and comic book characters? The main difference, some say, is that furries create their own personas rather than being passionate about on the creations of authors and movie studios. For furries, simply being who they want to be can make a world of difference in their happiness.

We used the raw data available from The Furry Survey to put together the information for this study.