Fentanyl was linked to over 20,000 drug overdose deaths in 2016 — causing more overdoses than any other drug including heroin and cocaine. Rates of fentanyl abuse are rising across the U.S., where the amount of fentanyl seized in 2017 totaled 1,485 pounds — a 742-fold increase over the amount of two pounds seized in 2013. Analysts are saying that at the rate fentanyl is causing overdoses, the U.S. could see 500,000 more overdose deaths by the year 2025. What is fentanyl? Fentanyl is a highly potent synthetic opioid between 50 and 100 times stronger than morphine, and 30 and 50 times stronger than heroin. The drug is relatively easy for most Americans to obtain from the streets and the Internet, and is often far lower in cost than heroin. Rates of fentanyl seizures in the U.S. are growing at a rapid pace, and driving the rate of drug overdoses around the country at the same time. 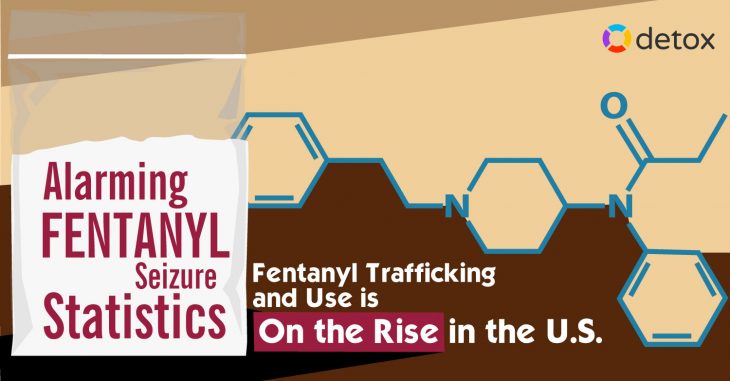 Here’s the most recent data surrounding fentanyl trafficking and seizures in the U.S., and what you can do to prevent fentanyl addiction from affecting your loved ones and local community.

Fentanyl was first approved by the FDA during the 1960s, but wasn’t illicitly produced or sold until 1991, when the DEA seized 40 pounds of fentanyl in Wichita, Kansas after the drug was linked to 126 overdose deaths. After that, problems with fentanyl didn’t arise again until 2005, when 1,013 overdose deaths were traced back to batches of illicit fentanyl being manufactured in a Mexico lab. Following the lab’s shutdown in March 2007, fentanyl overdose death rates in the U.S. gradually declined.

In 2014, the following 10 states accounted for more than 80% of all fentanyl seizures nationwide:

Fentanyl seizures are still at alarmingly high rates, despite the DEA’s recent efforts to combat trafficking. In New Jersey, two men were recently sentenced for possessing nearly 100 pounds of fentanyl — enough to kill the entire population of New Jersey and New York City. This was the largest seizure ever recorded to date for the state of New Jersey. Meanwhile, in Boston, state and federal law enforcement officials recently seized over 30 pounds of fentanyl believed to have originated from more illicit fentanyl labs in Mexico. 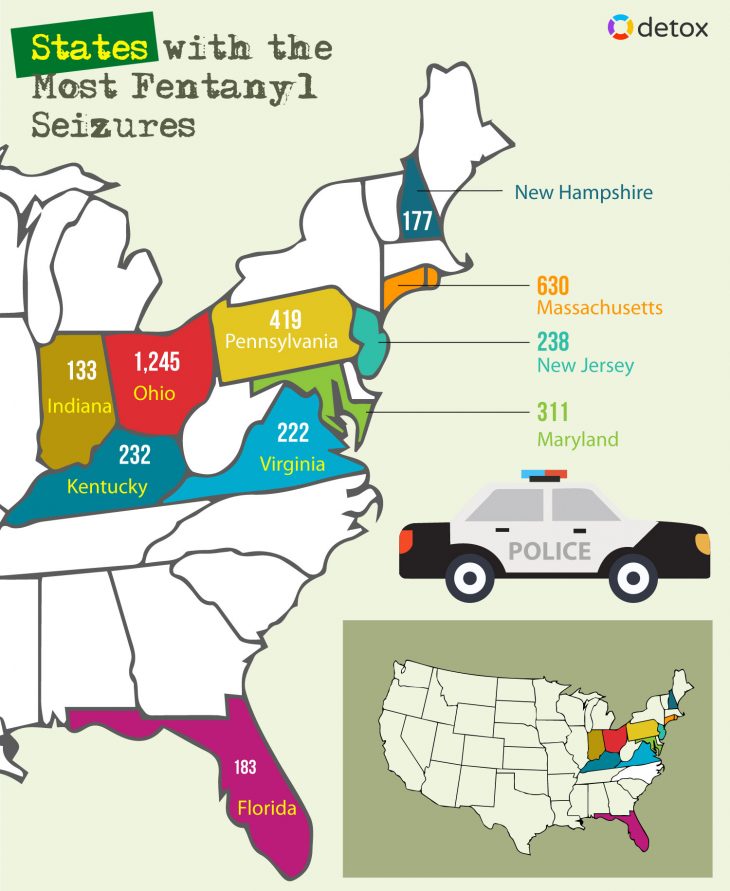 What is Being Done to Combat Fentanyl Trafficking?

The DEA reports that the supply lines for fentanyl and heroin are essentially the same, and that heroin traffickers who travel to the Southwest U.S. border can purchase both drugs at the same time from the same suppliers. But some fentanyl also enters the U.S. via the Canada border, while mass amounts of fentanyl are sent daily from China via international mail services. Fentanyl seized from Mexico is normally high in volume and low in purity, while fentanyl seized from China is far lower in volume but much deadlier and potent than fentanyl produced anywhere else in the world.

Why are fentanyl abuse and addiction rates growing so quickly in the U.S.? According to the DEA, just one kilogram of fentanyl powder can be purchased for a few thousand dollars from a Chinese distributor, and added as fillers to hundreds of thousands of counterfeit pills and drug supplies. As a result, dealers are generating millions of dollars, while thousands of Americans are overdosing on drugs they didn’t know contained fentanyl.

Here are steps the U.S. government is taking to reduce the fentanyl trafficking and reduce rates of fentanyl abuse.

In October 2017, President Trump declared the U.S. opioid crisis a public health emergency to allocate extra funding for resolving the crisis. When the declaration expired in January 2018, the emergency declaration was extended another 90 days. Congress has already granted the Trump Administration extra funds to be used to fight the opioid epidemic: $3 billion for fiscal year 2018, and $10 billion for fiscal year 2019. However, the majority of these funds will be used to fund research and studies surrounding addiction and pain management treatments, and will improve access to overdose reversal drugs like naloxone.

In mid-January, President Trump signed a bipartisan bill into law called the INTERDICT Act to obtain $15 million in federal funding for high-tech drug screening devices. The devices can detect fentanyl without coming into direct contact with the drug so agents, scientists, and other field workers can lower their risk for accidental overdoses when handling the drug. The screening devices are now being used at U.S. borders to prevent fentanyl trafficking and block fentanyl shipments coming from Canada, Mexico, and China.

At a recent White House summit, President Trump suggested turning fentanyl trafficking into a capital punishment that would result in drug dealers facing the death penalty. However, many agencies and Administration members are saying Trump’s suggestion contrasts sharply with the goal of focusing more on treatment to reduce fentanyl abuse and trafficking, and resolve the opioid crisis.

As part of its DEA 360 Strategy for fighting the war on opioids, the agency is working closely with state and local law enforcement teams to reduce fentanyl trafficking in certain high-problem areas. The DEA is using local intelligence in these areas to identify and target violent gangs, cartels, and drug dealers contributing to the fentanyl epidemic. At the same time, the agency is succeeding in making more frequent and larger seizures of fentanyl using this intelligence.

The DEA is also working closely with the China Narcotics Control Bureau to identify and shut down manufacturers of illicit synthetic fentanyl, and reduce the number of crimes involving the deadly drug. In November, the DEA classified all synthetic fentanyl analogues as Schedule I drugs — meaning the agency can now prosecute anyone who possesses, imports, distributes, or manufactures substances containing any type of fentanyl ingredient. China is also restricting the number of chemical ingredients used to make fentanyl analogues in an effort to reduce U.S. fentanyl addiction and overdose rates and help America overcome its opioid crisis.

U.S. Customs and Border Protection is now blocking fentanyl from entering the country using narcotics analyzer devices for which Trump obtained additional funding in early 2018. The portable screening devices can be used to check packages, mail, and travelers for fentanyl without coming into contact with the drug. The DEA warns that some batches of fentanyl are so potent they can cause an instant overdose in those who accidentally breathe in the substance or who accidentally allow the drug to come into contact with their skin — including border patrol agents.

A recent report revealed that the majority of fentanyl may be entering the country through the U.S. Postal Service, which Chinese distributors say is the easiest way to get fentanyl across U.S. borders. Investigators say an estimated $766 million worth of fentanyl was sent to people in the U.S. using the country’s own postal service, since the opioid is relatively easy to purchase online. In addition to using screening devices to detect fentanyl at the border, CBP also plans on hiring at least 5,000 more border patrol agents to aid in the prevention of fentanyl trafficking.

How Big is the Fentanyl Problem in the U.S.? 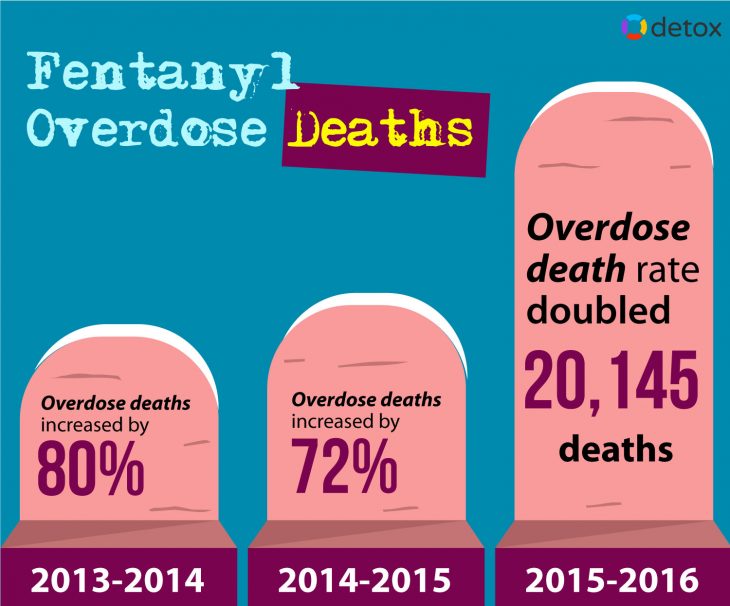 Because fentanyl is easy to obtain and lower in cost than most other drugs, many dealers mix the synthetic opioid with other drugs to offer their customers a more powerful high and benefit from higher profits. An increasing number of reports reveal that fentanyl is being mixed with heroin and counterfeit painkillers, along with other illicit street drugs including cocaine and methamphetamine. However, many users remain unaware their drugs are being mixed or cut with fentanyl, and are suffering deadly overdoses as a result.

Nearly 80% of U.S. heroin users report abusing prescription opioids first before switching to heroin. An estimated two million Americans are addicted to painkillers, and an estimated 591,000 Americans are addicted to heroin. Many of these individuals face the risk of suffering a deadly fentanyl overdose if they switch to using counterfeit painkillers or heroin for the sake of fueling their addictions and drug use disorders.

Preventing Fentanyl Abuse in Your Community

Fentanyl abuse and addiction can affect anyone in your community — including those you may not suspect are struggling with drug use disorders. But most cases of fentanyl addiction begin at home and stem from prescription opioid use. If you or your loved ones are using opioids or live in communities where opioid abuse rates are high, here are steps you can take to combat the opioid crisis and prevent fentanyl abuse from harming those you care about.

Many cities host multiple events throughout the year to raise awareness about drug and alcohol addiction, and to inform citizens about the dangers surrounding opioid use. Community outreach programs to stop addiction are even being organized on behalf of the DEA 360 Strategy in regions where opioid use is especially problematic.

Contact your state’s Department of Justice to learn more about local events surrounding opioid awareness, or reach out to non-government organizations also devoted to the fight against opioid addiction. Organizations devoted to raising drug awareness include the Boys and Girls Clubs, Boy Scouts and Girl Scouts of America, and the Partnership for Drug-Free Kids.

Environment is a leading risk factor for addiction, especially among youth, but educating students about opioids and addiction can help kids stay aware of the risks they face when being exposed to drugs. Schools can work closely with county health departments to receive educational resources about opioids that teachers can start including in curriculums. Offering opioid education in schools can help tackle fentanyl addiction at its roots, and prevent American youth from experimenting with deadly drugs that can trigger an overdose. 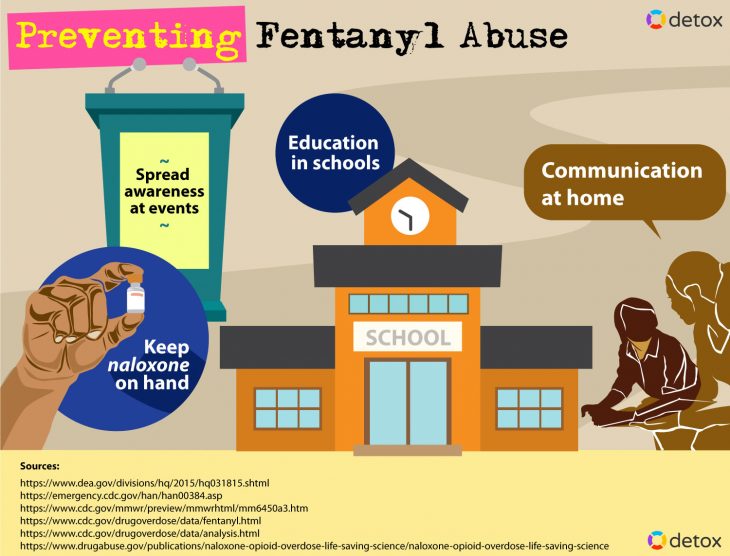 Communicate with Loved Ones at Home

Did you know that roughly half of all U.S. adults who abuse painkillers get the drugs for free from friends and family? Communicate with everyone in your household about the dangers of using painkillers illicitly without a prescription — placing emphasis on addiction, overdose, and the likelihood of switching to deadly drugs like fentanyl. Share tips with your family on how to avoid prescription drug abuse and lower exposure to fentanyl.

Have Naloxone on Hand

Naloxone is a drug that reverses the effects of an opioid overdose, and revives victims in an average of under five minutes. Studies show that naloxone reverses 93.5% of opioid overdoses, and that over 84% of overdose victims revived with naloxone are still alive one year later. If you live with people who use opioids, or in a community where opioid addiction and trafficking is problematic, visit your local pharmacy to purchase naloxone so you can reverse a fentanyl overdose. Naloxone is now available without a prescription in most states to help save the lives of those being affected by the U.S. opioid crisis.

Help for Fentanyl Use Disorder

If you or someone you love is suffering from fentanyl addiction, getting help now can save your life, and allow you to withdraw safely from the drug with a reduced risk for complications. Long-term fentanyl use increases your risk for serious health problems like lowered immunity and respiratory failure, and can also lead to coma or death. But a fentanyl detox can last anywhere between a few days to several months, and help you achieve lifelong sobriety from the drug.

Fentanyl addiction is commonly treated using a combination of drug detox and therapy. Choose a detox center that offers a medical detox or medication-assisted treatment, since these opioid detox methods often involve the use of medications that relieve or eliminate opioid withdrawal symptoms. FDA-approved drugs like methadone and buprenorphine can reduce drug cravings, insomnia, and muscle aches, while naltrexone can block the effects of opioids to help you stay sober.

To get help for fentanyl addiction, use our drug detox directory to find nearby addiction treatment centers in your city and state. Or, call our 24/7 confidential helpline at 800-483-2193(Who Answers?) to speak with an experienced drug abuse counselor who can discuss your treatment options, and help you find a detox center ready to guide you along the path to sobriety.